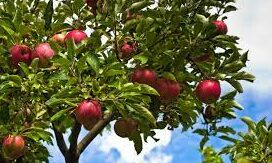 I am the Vine

In  John chapter 15,  Jesus compares Himself to a vine, like a grape vine.  And He compares Christians to the branches of the vine.  Some people call it a parable, but it’s really just a metaphor that Jesus uses, to teaches us a valuable lesson.  Let me read to you,  John 15, verses 1 thru 6;  “I am the true vine, and my Father is the vinedresser.  Every branch in Me (every branch that’s a part of the vine)  that does not bear fruit, He takes away;  And every branch that does bear fruit, He prunes, that it may bear more fruit.”

“Abide in Me, and I in you;  As the branch cannot bear fruit by itself, unless it abides in the vine, neither can you, unless you abide in Me.  I am the vine, you are the branches.  Whoever abides in Me and I in him, he it is that bears much fruit;  For apart from Me, you can do nothing.  If anyone does not abide in Me, he is thrown away like a branch, and withers;  And the branches are gathered, thrown into the fire, and burned.”

We’re told in  2 John verse 9;  “Everyone who goes on ahead, and does not abide in the teaching of Christ, does not have God.  Whoever abides in the teaching, has both the Father and the Son.”

I’d like to make an observation about what we’ve just read.  Let me re-read  John 15, verses 4 & 5;  “Abide in me, and I in you;  As the branch cannot bear fruit by itself, unless it abides in the vine, neither can you, unless you abide in Me.”  No one can “bear fruit” so to speak, unless he is abiding in Jesus Christ.   Verse 5  says;  “I am the vine, you are the branches.  Whoever abides in Me, and I in him, he it is that bears much fruit;  For apart from Me, you can do nothing.”  So then once again, unless one is abiding in Jesus, he CANNOT “bear fruit”.

So let me ask you this;  What kind of activity do you think of, when you think of “bearing fruit”.  You probably think of things like “bear one another’s burdens, and thus fulfill the law of Christ.”  (Galatians 6, verse 2)   And maybe, “Do unto others, as you would have them do unto you.”   (Mathew 7, verse 12)   And probably also, “Love your neighbor as yourself.”   (Mathew 12:31)

Well, you’d no doubt say, Yes, sure a non-Christian can do all those things.  So then, would a non-Christian be “bearing fruit” as they do those things?  Jesus says..  No they would NOT be bearing fruit”.   Listen once again to the words of Jesus Himself..  “As the branch cannot bear fruit by itself, unless it abides in the vine, neither can you, unless you abide in Me.”  And also..  “For apart from Me, you can do nothing.”

A non-Christian, isn’t abiding in Jesus.  A non-Christian, isn’t a part of “the Vine”.   And so even though a non-Christian, can have a good heart, and indeed do some of the very same things that Christians are commanded to do, yet when they do those things, they are not bearing any fruit.  Why?  Because apart from Jesus, you can do nothing!  Nothing as far as “bearing fruit” is concerned.   Unless you are a part of the Vine, you simply cannot bear fruit!

Sounds odd, doesn’t it?  But it’s true.  At least Jesus says it’s true;  And so it’s true.  Now, no one is saying that all those good deeds that a non-Christian does, isn’t “good”.  And no one is saying that those things aren’t helpful to others;  And I’m quite sure that God is pleased that these things are being done.  But the point is, that no matter how many “good deeds” a non-Christian may do, none of them are “credited” we might say, to that person.  Unless they abide in Jesus, as a part of the true “Vine” they simply are not bearing any fruit.  They may well be doing “good deeds” but they still aren’t “bearing fruit”.   Only a true Christian, can bear fruit.

You simply cannot “abide in Jesus” without first, having your sins forgiven, and being added, to the “body of Christ”,  the true “Vine”.   “I am the vine, you are the branches.  Whoever abides in Me, and I in him, he it is that bears much fruit.”

The Parable of the Two Fruit Trees

Hers’s another “parable” you might say;  Another story.  And another analogy.  And although this parable isn’t one that Jesus told, it could have been.  Because it’s something that the bible teaches.   And we can call this story, a “parable” because it’s an earthly story, with a heavenly meaning.

Here’s how the story goes..

There was a man who planted an apple tree.  And he looked forward to all those big juicy apples that would soon be growing on his tree.   And the tree grew larger and larger with every passing year, but it didn’t produce any apples.   But the man waited, and he waited, year after year, but still, his apple tree simply wasn’t producing any fruit;  No apples!

And he thought to himself..  Maybe I’ll plant a different kind of tree;  Maybe that tree will bear some fruit.  So the man planted a plum tree, very close to his apple tree.  And lo and behold, in a short time, the plum tree DID bear fruit, an amazing amount of fruit.  But what was truly amazing, was that all of a sudden, not only did the plum tree bear fruit, but the apple tree also began bearing it’s own fruit!

Well, the man was truly thrilled with both trees, and so he planted yet another tree.  And that tree quickly began to bear fruit, and the other trees bore even more fruit!

Well, the man truly thrilled, but also very surprised, and very curious.  Why did the apple tree, that for years had never produced any fruit, suddenly begin bearing so much fruit?  And why did all the trees bear so much fruit?  So the man contacted a nursery that specialized in fruit trees, looking for an explanation as to what happened.

And here’s what the nursery owner told the man..  He said that sometimes, a particular fruit tree requires what is called “cross- pollination” before it’s able to produce any fruit.  Cross-pollination, is when one plant provides provides the pollination necessary, for a neighboring plant to thrive and bear fruit.  And so when the one tree stood alone, it wasn’t getting that pollination;  it wasn’t getting the necessary “nourishment” that it needed.  But when a second tree, and then a third tree was introduced, well, the results speak for themselves.

Think about it if you would;  How are you going to “bear fruit” for God, all by yourself?  Are you simply going to do things for God?   Acts 17, verses 24 & 25  tell us;  “The God who made the world and everything in it, being Lord of heaven and earth, does not live in temples made by man.  Nor is he served by human hands, as though He needed anything, since he himself gives to all mankind life and breath and everything.”   The only way to bear fruit for God, is to “bear fruit” for someone else.  In other words, DO for someone else.

We all need “spiritual cross-pollination”!  We need each other!  You need the person sitting next to you, or sitting in front of you, or behind you, just like they need you.  We all even need all the other people of the world, in order to DO, the work of God, that He has given us to do.  Don’t forget what Jesus said, in  Mathew 25, verse 40;  “Truly, I say to you, as you did it to one of the least of these My brothers, you did it to Me.”

And in  Galatians 6, verse 10,  God instructs us with these words;  “So then, as we have opportunity, let us do good to everyone, and especially to those who are of the household of faith.”  You can’t do that all by yourself.  You need to be doing some “cross-pollinating”.

Here’s a biblical example of “cross-pollinating”..   “Speaking to one another, in psalms and hymns and spiritual songs, singing and making melody with your heart to the Lord.”  (Ephesians 5:19)

And  Colossians 3:16;  “Admonishing one another, in all wisdom, singing psalms and hymns and spiritual songs, with thankfulness in your hearts to God.”   That’s spiritual  “Cross-Pollination” at work.

The apostle Paul wrote, in  Romans 1, verse 12;  “..that we may be mutually encouraged by each other’s faith, both yours and mine.”

And we’re told in  Hebrews 10: 24 & 25;  “And let us consider how to stir up one another to love and good works;  Not neglecting to meet together, as is the habit of some, but encouraging one another, and all the more, as you see the day drawing near.”

How ’bout we make that our “New Year’s resolution”.