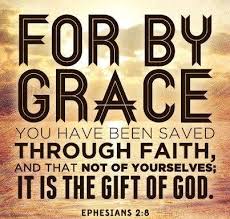 “For by grace you have been saved, through faith; And that not of yourselves, it is a gift of God; Not as a result of WORKS, that no one should boast.”  Ephesians 2:8-9

Listen please, to the very next verse..  “For we are His workmanship, created in Christ Jesus for good WORKS, which God prepared beforehand, that we should walk in them.”  V-10 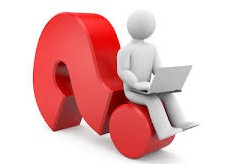 Now I have a question for you.  If God saves us by His grace, in other words salvation is a gift, and we could never deserve it nor could we earn it,  why does it say in the very next verse that God has already prepared beforehand, good WORKS, that we should walk in them?  Of course to walk in them simply means that we should obey them and do according to them.  If salvation has nothing to do with “works”, then why has God prepared “works” for us to walk in, once we are saved?  Don’t you think that’s a good question?  Do you know the answer?  Well, God gives us the answer in the bible if we will just do a little bit more reading, and apply a little bit of common sense to it all. 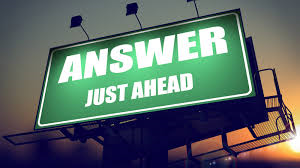 In Ephesians 2:8-9,  God is comparing a free gift (God’s grace) to the idea of working, to EARN salvation.  We can’t earn salvation, nor do we deserve salvation.  But because of God’s great love for all of us, He has devised a plan, from before the foundation of the world, whereby we could be saved from sin.  Eph 3:11  says,  “This was in accordance with the eternal purpose, which He carried out in Christ Jesus our Lord.”

It’s because,  “We all have sinned, and fall short of the glory of God” (Rom 3:23),  that we don’t deserve salvation.  Jesus said in Luke 17:10,  “So you too, when you do all the things which are commanded you, you say, We are unworthy servants, we have done only that which we ought to have done.”

So God is using the term “works” here to refer to doing something to EARN salvation.  We could work day and night for a lifetime, and still never earn salvation!  There’s two reasons for that fact.  First, no matter how much we could work, we still, “all have sinned and fall short of the glory of God.”  And secondly, and maybe most importantly, We would have to be able to do something to “earn” forgiveness of our sins, before we could possibly “deserve” salvation.  But it’s impossible for us to DO what’s required for our sins to be forgiven.  You see, the “price” that needs to be paid, for sins to be forgiven, is the blood of a “perfect sacrifice”.   Please read the article called,  “JESUS CHRIST, PERFECT SACRIFICE”.   A “perfect sacrifice”, has to be a “sinless sacrifice”, and so we could never pay the price for forgiveness.

But Jesus DID pay that price, and that’s how the “eternal purpose” was “carried out in Christ Jesus our Lord”.

And so that is how God uses the word “works” in this passage of scripture.  But we will see next, that God uses the same word, “works”, in a different manner in other scriptures.  And just as we can easily see how God is using the word in these verses that we just looked at, it will be just as easy to see how He uses it in the verses that we’ll look at next.

Another Meaning of “Works” 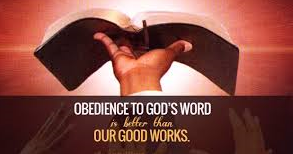 Let’s take a look at James 2:17,  “Even so faith, if it has no works, is dead being by itself.”  Now, if we don’t take the time to understand how God is using the word “works” here, we might think that God is contradicting Himself.  God had already said in Eph 2:8-9  that salvation was a gift of God, and NOT as a result of works.  Now God is saying that faith is DEAD if it does not have works.  What’s up with this?  Well, if we read on, we will see just what’s up.

The explanation really begins in verse 21,  “Was not Abraham justified by works, when he offered up Isaac his son, on the alter?”  Now obviously Abraham had faith in God, or he would never had offered his son Isaac upon an alter to be burned.  Yet God says that Abraham was justified, not because he had faith, but because of his works.

Just a slight bit of history would be in order here.  In Genesis 22:2,  listen to what God says to Abraham..  “Take now your son, your only son, whom you love, Isaac, and go to the land of Moriah, and offer him there as a burnt offering on one of the mountains of which I will tell you.”  Wow, that’s quite a command, isn’t it?  Offer your only son as a burnt offering!   What kind of faith would that require, to do that for God?

But just as God’s command to Abraham was quite a command, Abraham’s response to God was just as incredible.  Abraham OBEYED God by setting out on the journey to the land of Moriah to sacrifice his son Isaac, in obedience to God.  That’s quite an amazing “work” wasn’t it?  It was a “work” of obedience.  And that’s exactly why Abraham is called “The Father of the Faithful”.  We’re told in Galatians 3:9,  “So then those who are of faith, are blessed with Abraham the believer.”  How many of us would be obedient to God, to the point of death, be it our death, or the death of someone whom we loved?

Please listen to James 2:22-23,  “You see that faith was working with his “works”, and as result of the “works”, faith was perfected, and the scripture was fulfilled which says: And Abraham believed God, and it was reckoned to him as righteousness, and he was called “the friend of God”.

The “works” that Abraham did was simply to OBEY God’s command, isn’t that right?  We can see that it is.  God commanded Abraham to offer his son Isaac on the alter, in other words, as a sacrifice.  And Abraham OBEYED God and proceeded to fulfill that command, even though at the last minute God stopped him from actually killing his son.  And this act of obedience is used as an example in the writings of James, and God calls it “works”.

“You see that faith was working with his “works”, and as a result of the “works”, faith was completed” (or “made perfect”). 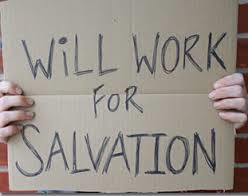 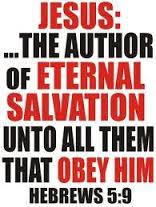 In the book of Ephesians, God speaks of the kind of works a person might do thinking he could EARN salvation.  But God says it can’t be done.  We could never earn it nor could we deserve it.  It’s a gift of God, given solely by His grace.

And in the book of James, God speaks of the kind of works that a person does in obedience to God’s commands.  And God says these works MUST be done in order for our faith to be “made perfect”.  Though salvation is offered to everyone, not everyone will ACCEPT God’s gracious offer, by being obedient to His word.  Our obedience IS our acceptance of God’s gracious gift of forgiveness through Jesus Christ.  If we don’t obey God, then we haven’t accepted His grace.

God has done His part when He sent His Son, His only Son, whom He loved, to be the sacrifice for our sins, “and not ours only, but for the sins of the whole world”.  1 John 2:2   Now we need to do OUR part, by being obedient to God’s every command, thus completing our faith.

“So then those who are of faith, are blessed with Abraham the believer.”  Gal 3:9

I hope this short study of “works” has helped you to understand more perfectly, God’s word, and His will for us.  May God bless you in the study of His word, and in your search for the truth.