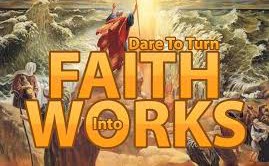 Is Believing In Jesus, All We Must Do To Be Saved?

Does faith alone save?  That’s a pretty simple and straightforward question, and it deserves a simple and straightforward answer.  NO, faith alone will not save anyone.  But many people do think that believing in Jesus Christ, is all it takes to be saved by God.  And since people do have different opinions on this subject, we’re going to let God answer the question from His inspired word.  So let’s open our bibles and see what God has said.

A premier text for this question is found in James chapter 2.  Let’s read from Jas 2:14,  “What use is it, my brethren, if a man says he has faith, but has no works?  Can that faith save him?  Isn’t that exactly what our question is?  Faith alone, just believing that Jesus is the Christ, the Son of the living God.  Can that faith save him?  Let’s go ahead and see how God Himself answers that question.  Now remember that, “All scripture is inspired by God, and is profitable for teaching, for reproof, for correction, for training in righteousness; that the man of God may be fully equipped for every good work.”  2 Tim 3:16.  The phrase “inspired by God”, literally means “God breathed”.  So the next few verses that we’re going to look at ( as well as every verse of the bible) are “God breathed”.  When we read these verses, it’s as if God Himself were speaking to us here and now! 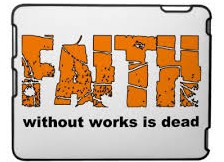 Here’s God’s answer..  Jas 2:15-16,  “If a brother or sister is without clothing, and in need of daily food, and one of you says to them; Go in peace, be warmed and be filled, and yet you do not give them what is necessary for their body, what use is it?  Even so faith, if it has no works, is dead being by itself.”  Now that should be enough for anyone, to answer the question, “Does faith alone save?”  When God asks, “What use is it?”,  that’s what is called a rhetorical question.  It really needs no answer because the answer is obvious to everyone.  The answer is that it’s of NO use at all.  And if faith without works is of NO use, then obviously, it can’t save anyone.  God’s word is so simple and easy to understand; Can faith alone save anyone?  Of course not, faith without works is useless!

But people are just people, and there’s always some people who will question anything, even the word of God.  And so God is patient, and He gives us examples to help us understand.  Listen to Jas 2:18,  “But someone may well say, You have faith and I have works; Show me your faith without the works, and I will show you my faith BY my works.”  Let me explain the point that James is making.  Can you SEE someone’s faith?  You can’t, can you?  Faith is not something you can see.  So how can someone prove his faith?  The only way there is to prove it, is by doing something that’s in accordance with the commands of God.  Doesn’t that make sense?

What James is saying here, is this..  You claim to have faith right?  OK, so SHOW me your faith without doing any works.  Show Me!  You can’t do it!  It’s impossible to show someone your faith in God, without doing what God says to do.  The doing of God’s will, is the evidence and the proof of your faith.  And so faith without works, is dead, being by itself.  It couldn’t be simpler.  It’s not the believing in God by itself, that saves you, it’s the doing of God’s will that saves a person.  Listen to verses 19-20,  “You believe that God is one, you do well.  The devils also believe and tremble!  But are you willing to recognize, you foolish fellow, that faith without works is useless?”

Doing God’s Will, Means To Obey His Commands 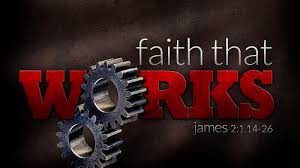 Let’s continue reading from the book of James and see what God gives us as an example of what He calls “Works”.  God will make it abundantly clear, that “works”, is the DOING of God’s will, in other words, it’s the doing of what God has told us to do.   Micah 6:8  says,  “He has TOLD you, O man, what is good.  And what does the Lord require of you, but to DO justice, to LOVE kindness, and to WALK humbly with your God.”  You cannot WALK with God, unless you DO what He says.  Otherwise you’d be walking with someone else!  Now let’s look at that example from the book of James…

Jas 2:21,  “Was not Abraham our father, justified by works, when he offered up Isaac, his son, on the alter?  You see, God told Abraham to offer his son Isaac, as a TEST of Abraham’s faith.  We read in Gen 22:2,  “And God said; Take now your son, your only son, whom you love, Isaac, and go to the land of Moriah, and offer him there as a burnt offering on one of the mountains of which I will tell you.”  Now God didn’t actually allow Abraham to kill his son, because at the very last moment, God stopped him.  But God told Abraham to do this, for the simple reason of seeing whether Abraham would OBEY what he was told to do.  And so it was a TEST of his faith.

Now Jas 2:22-23,  “You see that faith was working with his works (with his obedience), and as a result of the works, faith was perfected; (faith is useless without works in obedience to God, but WITH the obedience, that faith is perfected, or “made complete”)  And the scripture was fulfilled which says; And Abraham believed God, and it was reckoned to him as “righteousness”, ( righteousness IS the keeping of God’s commands) and he was called the “Friend of God”

Verses 24-26,  “You see that a man is justified by works (by DOING what God has told us to do), and NOT by faith alone.  And in the same way, was not Rahab the harlot, also justified by works, when she received the messengers and sent them out by another way?”  (this is a reference to when two men of Israel were sent by Joshua, to spy out the promised land of Canaan, and Rahab took them into her house, and hid them from the Canaanites, and sent them on their way by a safe route.  Joshua chapter 2)  “For just as the body without the spirit is dead, so also faith without works, is dead!” 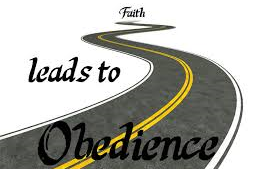 God has required only two things from people, from the beginning of time.  And those two things are Faith, and Obedience.  We must BELIEVE in God, and we must DO what He tells us to do. 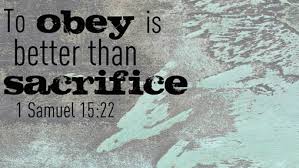 You Cannot Be Saved By Faith Alone !

As you can readily see, God is clear on the fact that NO ONE can be saved by just believing, but rather, it takes ACTION, it takes “works of obedience” to go along with your faith, before it’s the kind of faith that will save.  Faith and Obedience, that’s all God has ever asked of anyone.

James says, “Go ahead and SHOW ME, your faith without works!  You can’t do it!  Can faith alone save?  Absolutely NOT, because just like the body without the spirit is dead, so also, faith without works is dead.  That’s the word of God my friends, and we better believe it.  And if we DO believe it, then if we want to be saved, we better DO something about our belief.  We better OBEY every word that God has spoken!

Let me quote from the Old Testament here because it illustrates clearly the will of God..

Deuteronomy 30:19-20,  “I call heaven and earth to witness against you this day: That I have set before you life and death, the blessing and the curse.  So choose LIFE, in order that you may live, you and your descendants; by loving the Lord your God, by OBEYING His voice, and by holding fast to Him, for this is your LIFE, and the length of your days..”   God is telling us that OBEYING Him, and holding FAST (tightly) to Him, is our very LIFE!  It’s what our life needs to consist of!

“The conclusion when all has been heard is this;  Fear God and KEEP His commandments, for this is the WHOLE of man!”  Ecclesiastes 12:13

Thanks for being here, and may our God bless us all, in the study of His word, and in the obedience to His word.