In this article we’ll be discussing a couple more differences between the Old and New Testaments.  In the previous article,  Part 2 in the series, “DIFFERENCE BETWEEN OLD TESTAMENT AND NEW TEATAMENT”,   the first major difference that we learned was that the Old Covenant was made with the nation of Israel only.  But the New Testament was made for ALL mankind.  And so when we think about our responsibility to God, as far as obeying His instructions, we need to look to the New Testament as our guide.  We also learned that both the Old and New Testaments are “Laws”.  They’re not just suggestions for good living.  They are indeed the Laws of God, and specifically the New Testament is the Law under which we live today.  The New Testament is called the “Law of Christ”, in  Galatians 6:2,  and it is called the “Law of Liberty” in  James 1:25.   As a matter of fact James calls it the “Perfect” Law of Liberty.  It’s not like the Old law which had faults, it’s a new and  “perfect” law of liberty.

The Perfect Law Of Liberty 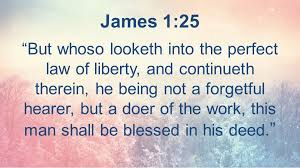 Here is a HUGE difference between the Old Law and the New Law.  The Law of Christ is called the Law of Liberty for a reason.  But it’s not for the reason that many people think.  Many people think that the phrase Law of Liberty means that since we live by the grace of God, we are at “Liberty” to do as we please in respect to religion.  That idea couldn’t be farther from the truth.  The New Testament is still “God’s Law”, and God’s laws must be obeyed!   We are at no more liberty to decide for ourselves what to do to please God, than people who lived under the Old Testament were.

We’re told in Hebrews 11:6,  “And without faith, it is impossible to please Him, for he who comes to God must believe that He is, and that He is a rewarder of those who seek Him.”   The entire eleventh chapter of Hebrews is a chapter dealing with the fact that those who are “of faith”, are those who have explicitly obeyed God.  They obeyed His every word, explicitly!  God lists eleven persons by name, and thousands of others by implication, who obeyed the word of God, thereby being declared “faithful”.  So, don’t think that the “Law of Liberty” gives us the liberty to choose whether to obey God or not.

What Does Liberty Mean ? 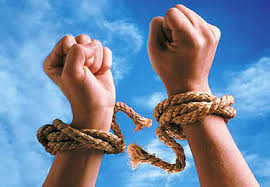 To put it very plainly, the Law of Liberty gives us liberty from SIN.  Before God cleanses someone of their sins, they are in “bondage” to sin.  Sin has control of us, we are “in it’s grasp”,  and we are dead spiritually, while in sin.  That means that if we die while we’re sin, Satan has won the war, and we get to spend eternity with him, in outer darkness, away from the presence of God..  ETERNALLY !   There’s no changing things once we die.

Listen to these very sobering words in 2 Thess 1:7-9,   “When the Lord Jesus shall be revealed from heaven with His mighty angels in flaming fire, dealing out retribution to those who KNOW NOT God, and those who DO NOT OBEY the gospel of our Lord Jesus.  And these will pay the penalty of eternal destruction, away from the presence of the Lord, and from the glory of His power.”

“If we die IN sin, we STAY in sin eternally.  But the Law of Liberty has the power to free us of the hold that Satan has on us, by cleansing us of our sins and by putting us IN Christ, instead of being IN sin.  “Blessed are the dead who die IN the Lord.”  Rev 14:13.   We’re told in 1 Cor 15:56,  “The sting of death is sin, and the power of sin is the Law;  but thanks be to God, who gives us the victory through our Lord Jesus Christ.”

What that verse is saying, is that it is because there IS a law, that we end up sinning.  And we end up sinning because we inevitably FAIL to keep the law perfectly.  And so the power of the sin is the fact that there is a law.   Romans 5;13  tells us,  “..But sin is not imputed where there IS no law”.  So the reason sin has any power at all, is because there is a law given by God.  And sin, is the “sting” of death.  In other words, there would be no problem with dying, if it weren’t for the fact that if we die IN sin, we will be condemned to “eternal destruction, away from the presence of the Lord, and from the power of His glory”.  Since sin brings with it punishment, it has a “sting”.  And so, “the sting of death is sin, and the power of sin is the law, but thanks be to God, who gives us the victory through our Lord Jesus Christ”.

Through Jesus Christ, we can be forgiven of our sins, and they can be completely washed away.  And so even though we are guilty, and deserve eternal destruction, we can escape the “sting” of death by being obedient to the commands of the “Perfect Law of Liberty”.  And we can be at liberty from the consequences of sin.  It’s really not hard to understand at all when we just look at what’s said, and believe it, and accept it for the truth that it is. 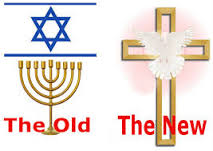 The Old Covenant was not able to take away sins!  Most people probably don’t realize that, but it’s true, and it’s a HUGE difference between the Old Testament and the New Testament.  Listen to this verse…

Hebrews 10:1,  “For the Law, since it has only a “shadow” of the good things to come, and not the very form of these things, can NEVER by the same sacrifices year by year which they offer continually, make “perfect” those who draw near.”  To “make perfect” is to completely cleanse one of their sins.  That’s why the New Testament is called the “Perfect Law of Liberty”, because the new covenant of Christ, can completely take away your sins forever!  In other words, the sacrifice of Christ, is not like those sacrifices of the Old Covenant which “..year by year they offer continually..”.  Those sacrifices could “..NEVER make perfect those who draw near.”

Heb 10:3-4 tells us,  “But in those sacrifices there is a reminder of sins year by year.  For it is IMPOSIBLE for the blood of bulls and goats to take away sins!”  There is only ONE thing that can take away sins, and that is the blood of Christ, the perfect lamb of God.  Listen to this next verse….

“Knowing that you were not redeemed (redeemed means to be “bought back” from sin, and from the hold of Satan) with perishable things like silver and gold, from your futile way of life inherited from your forefathers, but with the precious blood, as of a lamb, without spot or blemish, the blood of Christ.”  1 Peter 1:18-19

And listen to these very crucial verses… “Since you have in OBEDIENCE to the truth, purified your souls for a sincere love of the brethren, fervently love one another from the heart.  For you have been BORN AGAIN not of seed that is perishable, but imperishable, that is, through the living and abiding word of God!”  1 Pet 1:22-23

Consider what was said there.  The purifying of your soul comes through obedience to the word of God!  The vast majority of people who claim to believe in Jesus as the Christ, don’t believe ENOUGH, to OBEY what He says to do.  It’s only by obedience to God’s word, that your soul can be purified.  Also notice this fact.   Obeying the truth is a must, and this verse says that in doing so, you are “born again”.  That “new birth” takes place when one becomes a Christian.

You’ve already been born physically, but now you are “re-born” spiritually.  When you disobey God’s word, you sin, and you die spiritually.  That’s exactly what God meant when He told Adam, in Genesis 2:16-17,  “From any tree in the garden, you may freely eat, but from the tree of the knowledge of good and evil, you shall NOT eat.  For in the day that you eat from it, you shall surely DIE.”   On the very day that Adam and Eve ate of the only tree that was forbidden to them, they both died spiritually.

The New Testament provides us with the opportunity to be “born again” spiritually, after we have died spiritually, because of disobedience to God’s commands.  Have you ever heard anyone use the term, “A born again Christian”?  Well, there IS no other kind of Christian.  If one hasn’t been “born again”, then they aren’t a Christian.  Look again at 1 Peter 1:23,  “For you have been born again, not of seed that is perishable, but imperishable, that is, the living and abiding word of God.  The perishable seed being referred to is the physical seed of man which produces the human body.  That seed is perishable as is the body it produces.  But the imperishable seed is the living and abiding word of God.  God’s word will abide eternally.  Jesus tells us in Mathew 24:35,   “Heaven and earth will pass away, but My words will never pass away.”

The Old Covenant Was Faulty

“For if the first covenant had been faultless, there would have been no occasion for a second.  For finding fault with them, He says; Behold, days are coming says the Lord, when I will effect a New Covenant with the house of Israel, and with the house of Judah.  Not like the covenant which I made with their fathers, on the day that I took them by the hand to lead them out of the land of Egypt.  for they did not continue in My covenant, and I did not care for them, says the Lord.”  Hebrews 8:7-9

Hebrews 7: 11  says,  “Now if perfection was through the Levitical priesthood (for on the basis of it, the people received the Law), what further need was there for another priest to arise according after the order of Melchizedek, and not designated according to the order of Aaron?  For when the priesthood is changed, there is of NECCESSITY, a change of the Law also.”   Under  Old Covenant law, only men from the tribe of Levi could be priests.  That was what God had specified.  But Jesus our High Priest, is from the tribe of Judah.  So it is obvious that the priesthood has changed, and the scripture says that when the priesthood changes, it is NECCESSARY that the Law also change.

Listen to Heb 718-19,  “For on the one hand, there is a setting aside of a former commandment, because of it’s weakness and uselessness.. for the law made nothing perfect..  and on the other hand, there is a bringing in of a BETTER hope through which we draw near to God.”

V’s 23-25  say,  “And the former priests, on the one hand, existed in greater numbers, because they were prevented by death from continuing.  but on the other hand, because He (Jesus Christ) abides forever, He holds His priesthood permanently.  Hence He is able to save forever, those who draw near to God through Him, since He always lives to make intercession for them.”

V-28  says,  “For the Law appoints men as high priests who are weak, but the Word of the Oath (the New Covenant) which came after the Law, appoints a Son, made perfect forever.”

Here are Seven Differences Between Old Testament and New Testament 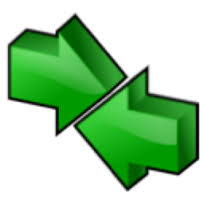 #1.  The Old Covenant was only for Israel

Thanks for being here to study God’s word.  As always, if you have a question, please feel free to ask.  If you have a comment, please let us know that also.  May God bless you in the study of His word.