Where Does God Keep Fallen angels?

There are two specific verses of scripture that tell about angels sinning.  One verse is on  Jude, verse 6.   The other verse is in  2 Pet 2:4.   Here are those two verses..

Jude V-6,   “And angels who did not keep their own domain, but abandoned their proper abode, He has kept in eternal bonds, under darkness for the judgment of the great day.”

2 Pet 2:4,   “For if God did not spare angels when they sinned, but having cast them down to hell, delivered them to chains of darkness, being kept for judgment..”

It seems very clear from these two verses that some angels did indeed sin.   Jude 6,  says that their sin was that they,  “did not keep their own domain, but abandoned their proper abode.”   The word translated “domain” means, “their starting point, or their beginning”.  And the word translated “abode” means, “their dwelling place”.  And so the sins of those angels was in not remaining in the place that God had originally given them to dwell in.

They evidently were not satisfied to remain at the place in which they “had begun”.  And I would have to assume that their original dwelling place was in heaven.  The bible doesn’t specifically say that their beginning dwelling place was heaven, but it only seems logical.  God ‘s word does tell us this about angels..

“Are they not ALL ministering spirits, SENT OUT to render service to those who will inherit salvation?”  Hebrews 1:14. 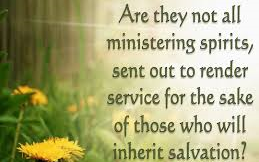 Now, those who will inherit salvation, are people that live on the earth.  So if angels are ALL ministering spirits, and if they are SENT OUT to render service to people on the earth, then they must have originated somewhere other than on the earth.  And so that pretty much leaves only heaven as their beginning abode.  We can only speculate as to WHY these angels would want to leave heaven, and dwell somewhere else.  Could it be that they wanted to dwell on the earth because they thought that maybe they could “rule” over us here?  Did they want more “authority” than they had in heaven?  As I said, we can only speculate because God hasn’t chosen to reveal the answer to us.

What God HAS revealed to us is this..  When the angels  “abandoned their own abode”, they sinned!  Obviously, they were not suppose to abandon their God given dwelling place.

Jude 6, tells us that since these angels sinned, God has kept them,  “in eternal bonds, under darkness, for the great day of judgment.”   The bible is very clear about the fact that there is a great judgment day that awaits everyone.    2 Cor 5:10  tell us that,  “We must ALL appear before the judgment seat of Christ, so that each one may be recompensed for the deeds done in the body, according to what he has done, whether good or bad.”   So evidently the angels that have sinned, will stand before that judgment seat also.

God is using this term figuratively, to designate His judgment upon the angels that had sinned.  You see, angels are not given the opportunity to repent of sin and be forgiven.  God doesn’t tell us WHY  angels are not given this opportunity, but it’s clear that they are not given any “second chance”, and so their fate is sealed right then and there.  On the other hand, we DO have the opportunity to repent of our sins, and to be forgiven of those sins.  As a matter of fact, we not only have the opportunity, but we are commanded to repent.  God says in  Acts 17:30,   “Therefore having looked beyond the times of ignorance, God is now declaring that ALL, everywhere should repent!”

Maybe angels, “should have known better”, having been in the very presence of God.  We’re not told any more about it though.  When angels sinned, they were immediately judged by God, and figuratively speaking, were  “cast down to hell”, delivered to chains of darkness.”   And this is where they are “kept” for the judgment day.  You might wonder WHY, if the angels have already been “judged” by God, what the “judgment day” is all about.

Well, actually all people who don’t believe in Jesus (and not believing, implies not obeying Jesus as well)  have already been judged also.  We’re told by Jesus, in  John 3:18,   “He who believes in Him is not judged, but he who does NOT  believe, has been judged already, because he has not believed in the name of the only begotten Son of God.”   The “judgment day”, is better thought as the “day of recompense”.  That’s why the verse that we read earlier from  2 Cor 5:10  says,  “We must all appear before the judgment seat of Christ, so that each one may be RECOMPENSED for the deeds done in the body, whether good or bad.”

Another  verse that verifies this is  Revelation 22:12,  “Behold, I am coming quickly  (quickly here means suddenly, Christ is coming suddenly on the judgment day)  and My reward is with Me, to RENDER to every man, according to what he has done.”   So, the “day of judgment” will actually be “the day of recompense” and a “day of rendering”, where we will all receive what we have coming.  And the “judgment day” is also the great “resurrection day”.

Where Is The Darkness ?

Jude 6  had said that the angels who sinned were kept in  “eternal bonds in darkness.”   2 Pet 2:4  said that those angels were  “delivered to chains of darkness.”  But where is this “darkness”?  We’re not told where this darkness is, but one thing that the bible is clear about, is the fact that  “God is light, and in Him is no darkness at all.”   1 John 1:5   So if the angels are being kept in darkness, we can be sure that it is AWAY from God.  But the bible simply doesn’t say where this darkness is.  All we know is that it’s away from the presence of the Lord.  Just like on the judgment day when Jesus will come  “with His mighty angels in flaming fire”.  (2 Thess 1:7)    On that day, Jesus will be  “..dealing out retribution to those who do not KNOW God, and to those who do not OBEY the gospel of our Lord Jesus.  And these will pay the penalty of eternal destruction, AWAY from the presence of the Lord and from the glory of His power..”   V’s 8-9.

Hell has been  “..prepared for the devil and his angels”   Mat 25:41.   But where is hell?  The bible doesn’t say where it is.  We know that it’s a spiritual place, but we’re not told where.  Where are the angels “kept” as they await the judgment day?  Again, we’re just not told.  But again, since angels are spiritual beings, they must also be kept in a spiritual place,  “in chains of darkness”.

“Chains of darkness” is also a figurative expression.  The “chains” simply signify that God Has “kept” them, so that they cannot escape.  And the “darkness” signifies “away from the light of our glorious God.

When God has chosen NOT to reveal something to us, I pray that we will be content, and satisfied, NOT knowing.  Let us be content with what God HAS revealed to us, and let us keep “busy” doing all that He has told us to do.