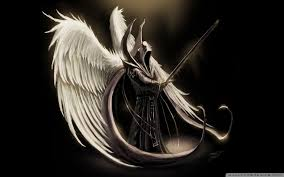 Did God Create Satan, And Is Satan An Angel ?

We’ve had two previous lessons on the subject of Satan.  And we’ve learned several things.  Just for a quick review, let me list what we’ve already learned from the bible.

#5.  In Summary.  Satan is the very SPIRIT of disobedience to God, the arch-enemy of good, an opponent, an adversary, an accuser, a deceiver, and a spiritual force.  Satan “rules” this world, as the “prince” and the “god” of this world.  And another very important thing that we must remember, is that Satan is a POWER!  Satan is the “prince of the power of the air”.   Not a physical power, but a spiritual power.  A power that can cause you and I to be lost in sin!

The Most Common Mistake

For those of us who believe in God, and are trying to understand God’s word, the most common mistake by far, that is made, is to read the figurative language of the bible, and attempt to apply it literally in it’s meaning.  Whenever you describe something, by comparing it to something else, you are using figurative language.  Such as when Satan is described as a serpent, or a dragon, or a roaring lion, that’s figurative language.

There’s very good reason WHY God has used so much figurative language.  And that reason is, that God is trying to convey to us SPIRITUAL truths.  But our life experience has only taught us about physical truths.  To gain any spiritual knowledge at all, we have to rely on God to reveal it to us.  But since we can’t see and touch spiritual things, God has to compare them to physical things that we CAN see and touch.  Things that we already know about.

And so God has to use “symbolism”, and figurative descriptions.  He has to “paint us pictures” of physical things, in order for us to come to an understanding of spiritual things.

Let’s Look At Symbolisms And Representations 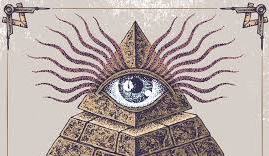 If you haven’t read the previous article titled  IS SATAN AN ANGEL – PART 2,  please go back and read that now.  If you’ve already read that, then you’ll understand the symbolism that’s used in  Isaiah 14:12,  where it says,  “How you have fallen from heaven, O’ Lucifer, son of the dawn.”   The word Lucifer means  “morning star”,  and it’s used figuratively to represent the GLORY that belonged to the king of the great empire of Babylon.  And the language goes on to talk about how the king’s pride and arrogance were so great, and his kingdom was so great, that he said of himself,  “I will ascend to heaven, I will raise my throne above the stars of God, And I will sit on the mount of the assembly..  I will ascend above the heights of the clouds, I will make myself like the Most High!”   V’s 13-14

And this is one of the passages of scripture, that make people think that Satan was originally an angel in heaven.  And how he wanted to exalt himself even above God.  And so people think that Satan was cast out of heaven for that reason.  But when we understand the symbolism of the passage, and when we read in  verse 4,  that this was a “taunt against the king of Babylon”;  Well, then we realize that this has nothing to do with Satan, except for the fact that the king of Babylon had the same “spirit” as Satan.  The spirit of pride and arrogance, and opposition and disobedience to God.

Another passage that people link together with this one from Isaiah, to form that idea and that teaching, is the passage that we looked at last time, from  Revelation 12, verses 7 thru 9.

Now as we saw from our last study, these verses are a continuation of  “a sign that appeared in heaven”.   (Rev 12, verse 3)   These “signs in heaven”, are an indication of something.  That’s what the word “sign” means..  “an indication, or a wonder”.  That word ‘sign”, is the same word that’s used to describe the miracles that accompanied the apostles in their preaching.  In that case, the “signs”, or the wonders that they performed, were the indication, that their words were from God.  In this case, the “signs” that were seeing, are an indication of something else.

Immediately after these “signs” are described, we read in  verses 10 thru 12;  “And I heard a loud voice in heaven saying;  NOW, the salvation, and the power, and the kingdom of our God, and the authority of His Christ, have come.  For the accuser of our brethren has been thrown down, who accuses them before our God, day and night.  And they overcame him, because of the blood of the Lamb, and because of the word of their testimony, and they did not love their life, even to death.”

And believers also overcame Satan, not only because of their faith and their testimony, but most importantly, because of the blood of the Lamb.”

Let’s look at this symbolism which starts in  verses 1 & 2.   “And a great sign appeared in heaven;  A woman clothed with the sun, and the moon under her feet, and on her head, a crown of twelve stars.  And she was with child, and she cried out being in labor and in pain to give birth.”

Now you can debate what exactly this symbolizes, but it’s obviously not describing a real event which took place in heaven.  It’s a “sign that appeared in heaven”, in a vision that the apostle John was being shown.

Now we have  verses 3 & 4.  “And another sign appeared in heaven;  And behold, a great red dragon, having seven heads and ten horns, and on his heads were seven diadems.  And his tail swept away a third of the stars of heaven, and threw them down to the earth.”   So there’s another analogy of somwthing being thrown down to the earth, just like the devil and his angels were said to have been “thrown down to the earth”, in  verse 9.

In order for you to more fully understand what Satan is, I’d like you to simply substitute the words, “spirit of evil”, or “spirit of disobedience” every time you read the words Satan or the devil, in your bible.  For instance, when we read in  1 Pet 5:8,  “Your adversary the devil, prowls about as a roaring lion seeking someone to devour”.   Just substitute the words, “the spirit of evil” for “the devil”.    And so the verse would read, “Your adversary, the spirit of evil, prowls around like a roaring lion, looking for someone to devour.”   This gives you a proper understanding of what it is that’s trying to devour us.