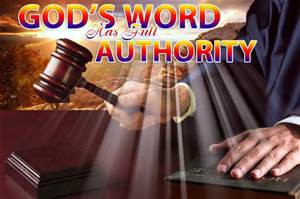 Do You Have God’s Authority ?

One day while Jesus was teaching the people in the temple, the Jewish chief priests and scribes and elders came to Him and said,  “Tell us by what authority you are doing these things?”   Luke 20:8   We all recognize that in establishing a teaching or doctrine, or in other words in establishing “rules”, we must have the authority to do so.

Jesus said, in  Mathew 28:18,   “ALL authority has been given to Me in heaven and on earth.”  God the Father, has given ALL authority to Jesus the Son.  That means that whatever teachings and rules that Jesus has established, are binding upon us.  He has that authority!  I just viewed a very good bible lesson from a preacher about the subject of having authority for everything that we do in religion, and even in everything that we believe.  That’s a very interesting thought isn’t it?  To realize that we must have the authority of Jesus, even for what we believe.

Actually, it’s a very sobering thought!  Take for instance, your belief concerning what church you attend.  Do you have the authority from Jesus Christ, to be a part of the particular church that you attend and worship in?  Jesus did say without a doubt, that some people worship in VAIN.

Jesus said, in  Mathew 15:9,   “This people honors Me with their lips, but their heart is far from Me.  But in vain they worship Me, teaching for doctrines, the precepts of men.”   In other words, they CLAIM to be worshipping Jesus, but in reality, their hearts are far from Him because they’re worshipping according to the teachings of men, instead of the teachings of Jesus.  And consequently, their worship is vain!

So the question is..   Do you have the authority of Jesus for what you believe, and for how you worship, and for the particular religious group that you associate yourself with?

Jesus asked His apostles, in  Mathew 16:15,  “But who do you say that I am?”  And Peter answered and said in  V-16,   “Thou art the Christ, the Son of the living God.”  That is the most important FACT that has ever been declared by God or man, that Jesus is the Christ!   That’s why Jesus replied with these words,  “Upon this “rock” I will build My church!”   V-18.   Jesus compared that “truth”, that he is the Christ, to a “rock” upon which His body of believers would be “built”.

So Jesus promised to build “My Church”, which really means, “My congregation”, or “My assembly”.  We call it His “church”  And Jesus did establish His body of believers on the day of Pentecost, in approximately 33 AD.    We’re told in  Colossians 1:18,   “He is also the head of the body, the church.”  And we learn from  Ephesians 4:4,   “There is ONE body.”

Interestingly though, you can’t “join” that body, you have to be “added” to it.  On that day of Pentecost, when the ONE church that Jesus died for, was established, the apostle Peter preached to a great multitude of people about that great “truth”, that Jesus is the Christ, the Son of the living God.”   And many people believed Peter’s preaching, and they came to understand their guilt, for having had a part in the crucifixion of Jesus.  So they asked the apostles,  “Brethren, what should we do?”   Acts 2;37

Peter replied and said,  “Repent and let each one of you be baptized by the authority of Jesus Christ, for the forgiveness of your sins..”   V-38.   Then we’re told in  V-41,   “So then those who had received his word, WERE baptized, and there were ADDED that day, about 3,000 souls.”   Then we read in  V-47,   “And the LORD WAS ADDING to the congregation, day by day, those who were being saved.”

Not one soul has ever “joined” the church that Jesus died for and  “purchased with His own blood”  (Acts 20:28)   But EVERY soul that has ever been saved, has been “added” to His church, by God Himself.  And the very first people who “the Lord added”, had been told to “repent and be baptized”.  And after they “had received his word” which obviously means that they obeyed his word, the LORD did the adding.

I think that’s a GREAT system!  God knows who has “received” His word.  He knows if we’ve repented and if we’ve been baptized.  Jesus Himself said in  Mark 16:16,   “He who has believed and has been baptized shall be saved!”  And God knows where He wants to “place” those that He saves.  Jesus suffered and bled and died, so that we could be saved.  And He built His church, so the saved could be added to it.

How many churches exist today?  Just in the United States alone, how many different churches are there?   How about world wide?  My guess would be that there are literally thousands, maybe tens of thousands.    But we only have the authority from Jesus, to belong to ONE of them!

Did you “join” the church that you attend?  Or did God add you to it?  If you joined it, then you don’t belong to Christ’s church.  That may be a bold statement, but that’s exactly what the bible teaches.  There is absolutely NO WAY, revealed in the bible, to “join” a church.  God must “add” you to His church.  And God DOES add everyone who is saved, to His church.  Many people believe that you can be saved without belonging to ANY church.  But when we read the bible, we see that’s IMPOSSIBLE.    The very same things that save us, are the very things that add us to His church.

There is nothing in this world, that’s more important than your soul!  And because of that fact, We MUST be sure that the church we belong to, is the church Jesus died for, because that’s the only church where salvation can be found.   And we must also be sure that the things we believe and teach and practice, are the things that Jesus has given us the AUTHORITY to believe and teach and practice.

As the scriptures point out, Jesus established His church on the day of Pentecost, in approximately 33 AD.  However, very shortly afterwards, men began to depart from the teachings of Christ, and they formed small “splinter” groups, “denominating” themselves with the names of their “leaders”.  One such group was the “Nicholaitans” mentioned in  Revelation 2:15.   Jesus said that He had “something against” the congregation in the city of Pergamum.  (A city in what is now Turkey)  Jesus said specifically,  “Thus you have some who in the same way, hold the teachings of the Nicholaitans.”  The Nicholaitans were obviously teaching a “different” doctrine from Christ’s doctrine.  Secular history identifies many other groups as well.  Some of these groups were still in existence in the second and third centuries.  But then in the fourth century, a denomination of a much grander scale was formed by the Roman emperor Constantine.

Formerly, the Roman empire was the greatest persecutor of Christians that the world had ever known.  They had demanded “Emperor Worship”, but when Christians wouldn’t bow down and worship the emperor, they were put to death in some of the most inhumane ways.  But then in the year 313 AD, the emperor Constantine officially declared that Christianity would be “tolerated” as one of the empire’s many religions.  And in a Roman council meeting in the year 325, the “Nicene Creed” was adopted, and that creed went on to become  the first “confession of faith”, of the newly formed denomination that came to be called, the Roman Catholic church.  The word “catholic” really simply means “universal”, and so this religious belief became “universal” throughout the roman empire.  But this “Roman” denomination didn’t adhere to the teachings of the bible, because the emperor Constantine wanted to make this religion more “acceptable” to the majority of people.  And so when you try to please people instead of pleasing God, you have to make some changes.  Within a relatively short period of time, the only thing the Roman Catholic church had in common with the church that Jesus died for and established,  was that it “claimed” to believe in Christ. 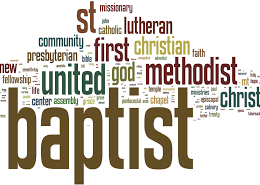 We do need to be aware though, that there are denominations out there that have scriptural names.  An example would be “Assembly of God”.  That’s a very scriptural name, but you will find that the beliefs and practices of that religious group, don’t match up with the bible.  We are admonished in  1 John 4:1,   “Beloved, do not believe every spirit, but test the spirits to see whether they are of God, because many false prophets have gone out into the world.”   God lays the responsibility upon us, to “test” everything that we hear preached, against the word of God.  That’s why I’m diligent to give you the verses of scripture to prove everything that I say on this website.  If the preaching is exactly according to His word, then it’s from God.  But if it isn’t exactly according to the bible, then we’re obligated to reject it!

The changing of just one word can make the difference between spiritual life and spiritual death.  God told Adam in  Genesis 2:17,   “But from the tree of the knowledge of good and evil, you shall not eat.  For in the day that you eat from it, you shall surely die.”  But then in  Genesis 3:4,   the spirit of evil, which is satan, said to Eve,  “You surely shall NOT die.”  Just one word was added, but it made the difference between life and death.  And God’s word of course proved right.  In the very day that Adam and Eve ate from the one tree that was forbidden to them, they surely DID die spiritually!

“Now I exhort you brethren, by the authority of our Lord Jesus Christ, that you all agree, and that there be NO divisions among you, but that you be made complete, in the same mind, and in the same judgment.”   1 Cor 1:10

NO, Christ has NOT been divided, and neither should we!  Those who have been added to Christ’s body, urge you ALL, to be of the same mind and of the same judgment, and that we all might believe and practice exactly what the bible says.  No more, and no less.  There’s a couple of sayings that are worth repeating..  “Let us speak where the bible speaks, and be silent where the bible is silent”.  Let’s call bible things by bible names, and let’s do bible things in bible ways.”  How can we go wrong if we just stick to the bible?

“Anyone who goes too far, and does not abide in the teachings of Christ, does NOT have God!  The one who abides in the teaching, he has both the Father and the Son.”   2 John 9

Please, tell me how you feel about what the bible says concerning the authority of Christ, or any other bible subject as well.  Isn’t it possible to all believe the bible alike?  God says it’s possible!  Jesus prayed for our unity!  (John chapter 17)  And since it IS possible, and Jesus prayed for it, it’s up to us to MAKE it happen.  May God bless you in the study of His word.