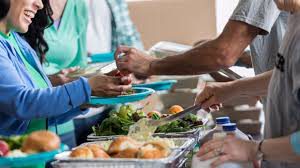 Is It Sinful To Eat In the Same Building That We Worship In?

The scriptures say, in  1 Cor 11:22,  “What!  Do you not have houses to eat and drink in?  Or do you despise the assembly of God, and shame those who have nothing?  What shall I say to you?  Shall I praise you?  In this I will not praise you.”

That is the verse of scripture that many people go to when making the claim that the bible forbids eating in the same building where we meet for worship.  Actually, if it forbids eating, then it would also forbid drinking, because that verse specifically says,  “Do you not have house to EAT and DRINK in?”   But yet it’s most interesting, that even though many people will say that eating in the building is forbidden by that verse, no one seems to have a problem with drinking out of a water fountain in the building.

The fact of the matter is, that neither eating nor drinking is forbidden in the building where Christians meet for worship.  As a matter of fact, the subject is never even mentioned in the bible.

This truth is really not difficult at all to understand, when you consider the context of the verse in question.  Lets go back to  verse 17,  and begin there, because that’s where this subject matter begins.

V-17  says;  “But in giving this instruction, I do not praise you, because you come together not for the better, but for the worse.”

Two things are apparent from this verse.  First, the Corinthians were in need of being corrected for something in which they were at fault.  Second, their fault concerned something that they were doing when they “came together”, in other words, when they gathered themselves together as a group.  The next verse bears this out, and specifies exactly what kind of group is being referred to.

V-18  says;  “For in the first place, when you come together in the ASSEMBLY, I hear that divisions exist among you, and in this part, I believe it.”

You’ll notice that I’ve used the word “assembly” in this verse, and I do so because this is the correct translation.  Most bibles use the word “church” but that is NOT an accurate translation.  The original Greek word used here is “ekklesia”.  Contrary to popular belief, the word “ekklesia” does NOT mean “church”.  There is a completely different word in the Greek language that means “church”.

The word “kuriakos” is the Greek equivalent of our word “church”.  The definition of “kuriakos” is..  “pertaining to the lord”.  However it doesn’t mean, pertaining to the “Lord GOD”, but rather, it pertains  to “A lord” as in “an owner of property” such as a landowner.  It’s a long story, but many centuries ago, Christians who were deviating from the true word of God, basically “changed” the meaning of the word “church”, and inserted that word into the bible, wherever the bible used the word “ekklesia”.

“Ekklesia” means..  “the called out”.  It also means..  “a congregation, or an assembly of people”.  As the word is used in the new testament, it refers to the “assembly” of people, who have been “called out” of the world, and transferred into the kingdom of God.

“For He delivered us from the domain of darkness, and transferred us to the kingdom of His beloved Son.”   Col 1:13

These people then, are the “congregation”, or the “assembly” of God’s people.  That is the true meaning of the original word used in the scriptures.  Once again, man causes nothing but trouble, when he interferes with and changes, the word of God.

I believe that a major part of the reason for the misunderstanding of  1 Cor 11:22,  is that many people, to some degree, associate the word “church” with the building that Christians meet in.   And so when that verse asks the question;  “Do you not have houses to eat and drink in”,  people conclude that they are forbidden to eat in the so called “church building”.

V-19  says;  “For there must also be factions among you, in order that those who are approved, may have become evident among you.”

All this verse is saying, is that problems, and “divisions and factions” within a congregation, serve as a test of our faithfulness to God.  When problems arise, those who are faithful to God’s word, and stick to God’s word, even when others are wanting to depart from it, will become evident.   And at the same time, those who are willing to try to change God’s word, and His instructions, will also become evident.   it’s kind of like being “tested by fire”.   The “fire of division” will be difficult, but we’ll be rewarded for our perseverance in the face of trial.

Now we come to the heart of the matter.   V-20  says;  “Therefore, when you come together, it is NOT to eat of the Lord’s Supper..”   Their purpose of coming together, SHOULD have been to eat the Lord’s Supper, as we learn from  Acts 20:7;   “And upon the first day of the week, when we were gathered together to break bread..”

It was clearly known by everyone, that the purpose for coming together as an assembly, was to “break bread”.  In other words, to eat the Lord’s Supper.  But we’ll see from  1 Cor, verse 21, that the Corinthians were eating their OWN supper, instead of the “LORD’S” supper.

V-21  says;  “For in your eating, each one takes his own supper first.  And one is hungry, and one is drunk.”  The word “drunk” here simply means “fully satiated”.   And so then, the sinful practice of the Corinthians, of disrespecting the Lord’s Supper, and turning it into an opportunity to have a physical feast, is condemned by the apostle Paul with the words of  V-22..

“What? Do you not have houses to eat and drink in?  Or do you despise the assembly of God, and shame those who have nothing..”

There were evidently some who didn’t have their own food to bring with them, and they were being “shamed” by those who were being so gluttonous.  It would be like us gathering together, and having a “pot luck meal” during the time we were supposed to be worshipping God!  And then on top of that, we didn’t even share with those who didn’t bring anything.  We come together for the purpose of “breaking the Lord’s bread”, but the Corinthians were “breaking their own bread” instead.

Their purpose should have been to eat the Lord’s Supper, but they had turned it into their OWN supper, and they stood condemned!   Not because they ate in the same building in which they worshipped in, but because they ate during the “assembly”.   “Or do you despise the ASSEMBLY of God..”  (1 Cor 11:22).