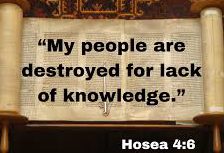 We Can Commit Sins Of Ignorance

The bible says that people do commit “sins of ignorance”, in other words, sins that they’re not aware, that they’re committing.  One area of scripture that people go to when talking about this subject is  Luke chapter 12, verses 47 & 48.

This is Jesus speaking;  “And the slave who knew his master’s will, and did not get ready, or act in accord with his will, shall receive many lashes.  But the one who did NOT know it, and committed deeds worthy of blows, will receive but few.  And from everyone who has been given much, shall much be required.  And to whom they entrusted much, of him they shall ask the more.”

The subject matter being spoken of by Jesus, was “readiness”.  In other words;  Be ready when the Lord comes.   Jesus said in V-43;  “Blessed is that slave whom his lord finds so doing (doing his will) when he comes.”

But He says in  verses 45 & 46;   “But if that slave says in his heart;  My master will be a long time in coming, and begins to beat the slaves, men and women, and to eat and drink and get drunk, (or be filled and satiated) the master of THAT slave, will come on a day when he does not expect, and at an hour he does not know, and will cut him in pieces, and assign him a place with the unbelievers.”

That sounds serious doesn’t it?   Now, I’m sure that the phrase,  “and will cut him in pieces”,  is a figurative expression meaning to be punished in some way.  But the phrase, “and assign him a place with the unbelievers”, is pretty straightforward.  Unbelievers will be lost, won’t they?   They’ll be in “outer darkness”, where there will be “weeping and gnashing of teeth”.   Mat 25, verse 30.

I want to ask you something about that verse.  Here’s the whole verse,  Mat 25:30;   “And cast the worthless slave into the outer darkness.  In that place, there shall be, weeping and gnashing of teeth.”

More About Sins of Ignorance

But let’s get back to “sins of ignorance”.   Luke chapter 12, verse 47 & 48  tells us  “And the slave who knew his master’s will, and did not get ready, or act in accord with His will, shall receive many lashes.  But the one who did not know it, and committed deeds worthy of blows, will receive but few..”

To commit deeds “worthy of blows”, or “lashes”, obviously means, to commit sins.  And even though that second slave didn’t know his master’s will, he was still guilty of committing those sins, and he still received lashes, but only “few lashes”.

Let’s look at the last part of  verse 48;   “And from everyone who has been given much, shall much be required.  And to whom they entrusted much, of him they will ask all the more.”

Let’s convert this parable from being about slaves and masters, to what it’s really talking about.  And that is, the responsibilities of man, to God the Father.

The reason is, that the person who has been given more knowledge, and more understanding, will be required to USE that knowledge and understanding, to DO God’s will.  If you have been entrusted by God, with more, then God will ask more of you in return.

While the person who never took the time to learn God’s will, though he is guilty, and will pay the price for his guilt, eternally, he still won’t bear the same degree of responsibility as the one who had more knowledge and more understanding.  And thus he won’t suffer the same degree of punishment.

So then is it better to remain ignorant of God’s will?  No, because you would still be guilty and suffer eternally, in outer darkness.  And maybe you wouldn’t be the one “gnashing your teeth”, but that’s not much consolation.  The only safe course, is to know God’s will, and to do it!

Let’s look at another scripture.   1 Tim 1:12-14.   Paul writes here;  “I thank Jesus Christ our Lord, who has strengthened me, because he considered me faithful, putting me into service, even though I was formerly a blasphemer and a persecutor, and a violent aggressor.  And yet I was shown mercy, because I acted ignorantly, and in unbelief.  And the grace of our Lord was more than abundant, with the faith and love which are in Christ Jesus.”

Even though Paul had sinned so grievously, he said that he  “was shown mercy, because I acted ignorantly, and in unbelief”.

This verse doesn’t require a lot of comment.  Everyone who has never been baptized, is sinning either ignorantly, or in unbelief, or both.  And everyone is shown the very same mercy, because of the grace of God.   Remember, that’s exactly what grace is.  The unmerited kindness of God, extended toward sinners.

This is in contrast to the one who knowingly, and willingly keeps on sinning, after he has come to know the truth, and has been saved from past sins.

Heb 10:26  tells us this plainly and clearly..  “For if we go on sinning willfully, after receiving the knowledge of the truth, there no longer remains a sacrifice for sins;  But a certain terrifying expectation of judgment, and the fury of a fire that will consume the adversaries.”

That’s not describing someone who is sinning ignorantly.  That’s a description of someone who has turned their back on the grace and mercy offered by God.  And so therefore, “there no longer remains a sacrifice for sins”.   This person, will receive some of the greatest punishment, because he knows the will of the Father, but refuses to do it.

There is simply nothing in the new testament, that teaches that we’ll be forgiven of sins, just because we were ignorant about the sins we committed.  Rather, the bible DOES indicate that it is our responsibility to make sure we LEARN the will of God, so that we can use it to direct our lives.

We’re told in  Jeremiah 10, verse 23;  “I know O Lord, that a man’s way is not in himself.  Nor is it in a man to direct his own steps.”    This knowledge alone, should be enough to motivate us to learn God’s will.

Some People May Have No Capability

But this brings us right back to the scenario that we’ve considered at other times.  What about the person who has no capability of knowing the truth?  For whatever the reason, they’ve had no capability of knowing God’s will.  Will they be lost, when they’ve had absolutely no chance of knowing God’s will?  Where does this person stand, in relation to God’s plan of salvation?  How does a perfectly “just” and “fair” God, deal with that person?

I know my answer to that question, and I think you know that answer also.  Remember the verse in  Romans 5:13 ?   “For until the law, sin was in the world;  But, sin is not imputed, when there is no law.”   How can there be a law, for the person who is incapable of knowing the law?   My answers is;  There can’t be!

In  Leviticus chapter 4,  we have some instructions concerning “unintentional sin”.  The word translated “unintentional”, also means..  “mistakenly, in error, unawares, ignorantly, unwittingly, and inadvertently”.   You could really make a case for differentiating between the meaning of some of those words.  But the main point, that all these words have in common, is that the sin spoken of, was NOT a sin that was committed WILLINGLY.   It may have been an action that you didn’t know was sinful, which would be ignorance.  Or it could have been that you somehow “forgot” that some action was against God’s will.  Or maybe it could be going against a command of God, that you truly didn’t understand properly.  So no matter whether you simply “forgot”, or never really understood, it would still fall into the category of “being mistaken, or being unaware, or doing it unwittingly, or inadvertently”.

But whatever the case may be, listen to a few verses;  Leviticus 4, verses 2 & 3.   “If a person sins unintentionally, in any of the commands of the Lord, which are not to be done, and commits any of them;    If the anointed priest sins, so as to bring guilt on the people, then let him offer to the Lord, a bull without defect as a sin offering, for the sin he has committed.”

Now, this is a bit of a difficult verse to understand.  But let me suggest this to you.  I believe that the way the verse should read is like this..  “If a person sins unintentionally, in any of the commands of the Lord which are not to be done, and commits any of them..   (so then, if a person unintentionally sins by committing an act that is forbidden to be done),  And if it’s the anointed priest that commits the sin, so as to bring guilt on the people, then let him offer to the Lord… “

Does that sound a little easier to understand?   What the two verses are saying is..   That if a person sins unintentionally, and the person who sins is the anointed priest..   Then this is how to handle it.

Here’s why I believe that’s the correct meaning.   Verse 13  says very clearly;  “Now if the whole congregation of Israel commits error, and the matter is hidden from their eyes, and they commit any of the commands which are not to be done, and are guilty..”

Then  Verse 27  very clearly says;  “Now if anyone of the common people sins unintentionally, in doing any of the things which the Lord has commanded not to be done, and is guilty..”

So then in  verses 2 & 3,  we have an anointed priest committing unintentional sin, with guilt following.

Then in  verse 13,  we have the whole congregation committing unintentional sin, with guilt following.

And then in  verse 27,  we have anyone from among the common people, committing unintentional sin, with guilt following.

But notice that in each case, even though the sins are unintentional, the scriptures still speaks about the guilt involved.  In the case of the whole congregation, and in the case of the common person (and by the way, the word “common”, properly means..  “of the land”, or, “the common sort”.  So in the case of the whole congregation, and of the common person, those verses specify;  “when the sin they have committed becomes known”.  Then the sacrifices were to be made.  They wouldn’t have been able to make a sacrifice for sin, before they knew that they had sinned.   But yet the scriptures speak of guilt, and when that guilt was realized, when it became known, sacrifice had to be made immediately!

There’s a lot to the study of this subject.  But I find it very interesting.  And I think we need to understand all we can about it, because it does have a bearing on our own forgiveness.

I know there’s still more to consider, and we’ll get to the rest.  But think about what we’ve studied so far, and pray for understanding about these things.  Because it is a bit involved, and maybe even a bit complicated.  But I think that after we’ve studied all that the bible says on the matter, it will become a whole lot clearer and “simpler”.

Our next study will be  “Sins Of Ignorance – Part 2”.    Be sure to join us for that further study of this subject.

May God bless you in all your study of His inspired word.

As always we urge you to join in our study by leaving your thoughts in the space provided below.  Any and all questions and comments are welcome.