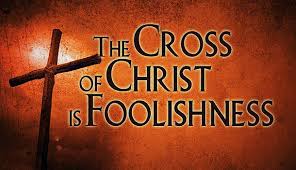 Maybe you didn’t know that “foolishness” could be attributed to God.  And maybe you didn’t know that “weakness” could also be attributed to God.   But there you have it in that one verse;  The foolishness of God, and the weakness of God.  But of course those of us who know the bible, know that God is actually being just a little bit sarcastic there in that verse.  God can be sarcastic at times.

Maybe one of the most well-known illustrations of sarcasm in the bible, is in the book of  1 Kings, in chapter 18.

And here’s what it says in  1 Kings 18, verse 26;  “Then they took the ox which was given them, and prepared it, and called on the name of Baal from morning until noon saying;  O Baal, answer us.  But there was no voice, and no one answered.  And they leaped (or danced) about the alter which they had made.”

Here’s where the sarcasm comes in.   Verse 27  says;  “And it came about at noon, that Elijah mocked them and said;  Call out with a loud voice.  For he is god!  Either he is occupied or gone aside, or is on a journey.  Or perhaps he is asleep, and needs to be awakened.”

Since  “all scripture is God-breathed” (2 Tim 3:16),  it wasn’t only Elijah being sarcastic here, it was God Himself.   And I think that when God said;  “The foolishness of God is wiser than men, and the weakness of God is stronger than men”,  He was also being a bit sarcastic.   Think about it..  Foolishness and weakness with God?  I don’t think so.

God wasn’t really saying that there is foolishness in what He does.  And He wasn’t saying that there is really any weakness with Him.  I think what God is really saying, is that if you PERCIEVE that there is foolishness, to anything God has done, it’s only because YOU are too foolish to know any better.  And if you PERCEIVE there to be any weakness with God, it’s only because YOU are too weak to even comprehend the strength of God.

1 Corinthians chapter 1, verse 18  says;  “For the word of the cross, is to those who are perishing, foolishness, but to us who are being saved, it is the power of God.”

The “word of the cross” is the gospel.  It’s the “word” telling us about the sacrifice of Christ.  It’s all about His death, His burial, and His resurrection.   And for those who are lost and perishing, it’s foolishness!  And WHY is it foolishness to so many people?  Well, it’s foolishness, because so many people think they’re smarter than that.  They’re not so naïve, as to think that some “story” in the bible, has any eternal consequences.   Especially a story about a man who was eventually put to death!

Listen to  verse 21, of 1 Corinthians chapter 1;   “For since in the wisdom of God, the world through it’s wisdom did not come to know God, God was well-pleased, through the foolishness of the message preached, to save those who believe.”

The “world” in that verse, obviously means the people of the world.  And so, in the “wisdom of the people of the world”, those people will never come to know God, because they view His word as just a foolish story.  And of course God, who is “all-knowing’, KNEW that men would think that “they’re so smart”.  Therefore, because of that attitude,  “God was well-pleased, through the foolishness of the message preached, to save those who believe.”

God puts it another way in  verses 27 & 28;  “But God has chosen the foolish THINGS of the world, to shame the wise..”  Some versions say,  “..to confound the wise..”   The original word means..  “to shame and disgrace.  To put to utter confusion, and to utterly frustrate”.

Can’t you see how people of the world are just utterly frustrated over the bible?   They rant and rave over the things that the bible says.  How THIS is impossible, and how THAT’S impossible!   And they drag science into the picture.  And they supposedly “prove” that the bible is wrong, because their “science” doesn’t agree with it.  God doesn’t have to shame those people, they shame themselves!   The sheer foolishness of thinking that you know more than God, is simply shameful.

But have you ever listened to an atheist, debate?  Their frustration makes them use the most ridiculous, and the most illogical arguments, that you’ve ever heard.

So here’s God’s list of things, that He has chosen, to completely frustrate man’s wisdom:  Foolish things, weak things, base things.  “Base” things, by definition, are things “of no reputation, of no importance”.  Also, despised things.  “Despised” things are pretty much the same as “base” things.  They’re things that, in the world’s opinion, “count as nothing”.

So..  Foolish, weak, base, despised;  All the things that are NOT of any value, to the world.  Yet those are the very things that GOD has chosen, to nullify, or to “bring to naught”, the things that ARE of value to the world.   Things like “worldly wisdom”, and pride, and social position, and material things, and accomplishments, and of course, money.

That’s why God says in  1 Corinthians 1, verse 26:  “For consider your calling brethren.  That there were not many wise, according to the flesh.  Not many mighty, not many noble.”

But  “God was well-pleased, through the foolishness of the message preached, to save those who believe.”   God choose the “foolish” things, to shame the wise.  There seems to be a little sarcasm right there.  God says;  Here’s the things that you’ve chosen, but look at what I’VE chosen!  The world sure knows, what’s of value, and what’s not of value, doesn’t it?

It’s like what God said to Job, in  Job 38, verses 4 thru 6;  “Where were YOU, when I laid the foundation of the earth?  Tell Me, if you have understanding.  Who set it’s measurements, since you know?  Or who stretched the line upon it?  On what were it’s bases sunk?”

The world sure does have all the answers.

“..The foolishness of the message preached..”

It sure was “foolish” of Jesus, to have all the power of God, and yet to allow Himself to be crucified.   “Come down from the cross and save yourself”, the people said as they mocked Him.   (Mark 15, verse 30)

And Jesus Himself was rather “base” wasn’t He?   He was of no reputation, and of no importance.  “Can any good thing come out of Nazareth?”   (John 1, verse 46)

Jesus was actually “despised”!   “He was despised and forsaken of men.  A man of sorrows, and acquainted with grief.  And like one from whom men hide their face.  He was despised, and we esteemed Him NOT!”   (Isaiah 53, verse 3)

And yet this was the man, who nullified, all the things of the world, which ARE.  And His life;  A life of sorrows, and a life acquainted with grief.  This life of Jesus, how foolish it was, to spend every day, giving to everyone else, and never doing a thing for Himself.

How weak and how base, and how despised!  But yet, that very life, was the life that took away the sins of the world!   And it was the only life that has ever been lived, that had such power!   That’s why we need to remember the words of  1 Corinthians 15, verse 57;  “But thanks be to GOD, who gives us the victory, through our Lord Jesus Christ!”

The life of Jesus, was the MOST important life ever lived.  And Jesus is certainly NOT, “of no reputation”.  His reputation will live eternally!

The “foolishness of God” is truly wiser than men.  And the “weakness of God”, is truly stronger than any man could ever imagine.

Think again, about that word “base”.  In the scripture, it meant..  “of no reputation”, and “of no importance”.   But just for the sake of discussion, let’s think of “base”, as meaning..  “basic”, or “foundational”.  There are three things that are absolutely “foundational” to every human being.  Those three things are “life”, and “death”, and the “resurrection”.   And those are the three things , that God has used, to bring about salvation.

The Jews wanted their earthly kingdom restored.  And so they “stumbled” at the thought of the lowly Jesus being the Messiah.  Can you imagine the embarrassment of the Jews, and the insult they felt, when the Roman soldiers mocked Jesus, and put a scarlet robe on Him, and put a crown of thorns on His head, and a staff in His hand, and basically “presented Him to them”, and said;  “Hail, King of the Jews!”   (Mathew 27, verse 29)   They must have been truly “offended” by Jesus.   “The stone of stumbling, and the rock of offense”.

And those gentiles who did the mocking, they knew what a “real” king was.  They weren’t so foolish, as to believe that Jesus was a “real” king!   Real kings, overcame their enemies.  Real kings conquered nations.  How you gonna conquer anything with meekness, and humility, and love?  And by dying?

You know what the world really despises?  What it really doesn’t even want to think about?  The answer is, Death.  Death isn’t a very “nice” subject, in the minds of most people.  But yet, in reality, death is one of the things that God uses to bring about eternal salvation.

“Blessed are those who die in the Lord, from now on!  Yes says the Spirit;  That they may rest from their labors, for their deeds follow them.”   (Revelation 14, verse 13)

And once again,  1 Corinthians 1, verse 18;  “For the word of the cross, is to those who are perishing, foolishness, but to us, who are being saved, it is the power of God!”

“For I am convinced, that neither DEATH, nor life, nor angels, nor principalities, nor things present, nor things to come, nor powers, nor height, nor depth, nor any other created thing, shall be able to separate us from the love of God, which is IN Christ Jesus our Lord.”    (Romans 8, verse 38)