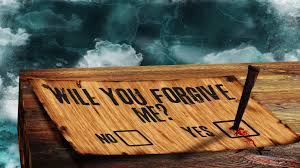 Jesus said in Mathew  6, verse 15;  “But if you do not forgive men, then your Father will not forgive your transgressions.”

Some people have misunderstood that verse.   There’s a couple of translations that change the word “debt”, to the word “sin”. So then the verse would read; “Forgive us our sins, as we forgive those who sin against us.”   And as a result, people think that if they can forgive someone who sins against them, then they can forgive their sins.  But that’s not true.

Now there’s no doubt, that the debt we owe to God, is a debt of sin.  When we fail to do exactly as God has instructed us, we’ve sinned.  We have “missed the mark” that God has set for us to attain to.  That’s what sin is.  It’s a transgression of God’s law, it’s disobedience to the law, it’s failing to meet His standard, and it’s “missing the mark” that he has set.

If I sin against you, I haven’t transgressed a law that YOU have established.  And I haven’t failed to meet the standard that YOU have set.  I’ve failed to meet GOD’S standard.  If I sin against you, I haven’t failed to obey you, I’ve failed to obey God.  If I were to defraud you, or if I were to lie to you, I would have mistreated you and sinned against you, not because YOU said I have, but because GOD says I have.  Therefore, paying YOU back somehow, for my mistreatment of you, is different from paying God back, for my sin, of breaking His law.

There’s a difference between forgiving someone for sinning against you, and forgiving their sin.  You can say to someone;  I forgive you for mistreating me, for not treating me as God has instructed you to treat me.  But as for actually forgiving the sin that has resulted from your mistreatment of me, you’ll have to see God about that.  I don’t have the power to bind you unto punishment for your sin, and I don’t have the power to loose you, from the punishment for sin.

Do you remember the story in  Luke chapter 5,  of the paralyzed man being lowered through the roof of a building, because that was the only way he could get to Jesus?  And when Jesus saw the man’s faith, He said;  “Friend, your sins are forgiven.”  And do you remember what the scribes and Pharisees said?  They said, in  verse 21;  “Who is this who speaks blasphemies? Who can forgive sins but God alone?”

Jesus didn’t refute that notion, that God alone can forgive sins. But what He said was this;  “But in order that you may know, that the Son of Man has the authority on earth to forgive sins,  (and now He turns to the paralytic, and says)  I say to you, arise, and take up your bed and go home.”  (Verse 24)

An interesting story is told in  Genesis chapter 50.  You remember how the sons of Jacob, had sinned against their brother Joseph, by selling him as a slave. And you remember how, many years later, they were all reunited in Egypt, where Joseph had become second in command to Pharaoh.  And so all of Joseph’s brothers were, you might say; At His mercy.  And when the time came, that their father Jacob died, they said to one another:  “What if Joseph should bear a grudge against us, and pay us back in full, for all the wrong which we did to him?”  (Gen 50, verse 15)

They had good reason to be afraid, didn’t they?  Joseph had the power in Egypt, to do whatever he wished.  But we’re going to see what he DIDN’T have the power to do.

So, Joseph’s brothers were worried, and they sent a message to him, that said;  “Your father charged, before he died saying..  Please forgive, I beg you, the transgressions of your brothers, and their SIN, for they did you wrong. And now, please forgive the transgression of the servants of your father.”  (Verses 16 & 17)    Do this for your fathers’ sake, they were saying.

And the bible says;  “..And Joseph wept when they spoke to him.  Then his brothers also came, (at first they sent a messenger, but now they themselves came) and fell down before him and said;  Behold, we are your servants.”   In other words;  We’re at your mercy.

So Joseph’s brothers, made up the story, that their father Jacob, had requested Joseph, to forgive their sins.  What they really wanted, was for Joseph to NOT take revenge on them.

Is that contradicting what I’ve been saying?   Listen again;  “For if you forgive men for their transgressions..”   Is that saying that you CAN forgive men for their sins?   No, that’s not what it’s saying.  It’s actually saying exactly the same thing that  verse 12 says;  “Forgive us our debts, as we forgive our debtors.”

The word transgression, is a different word from the word sin.  The word transgression is sometimes translated, “trespass”.  They mean the same thing.  Those words mean..  “a slip, a false step, a fall, even a falling away.”   It CAN refer to a sin, but it doesn’t always mean, sin.

We can forgive men for that, but we can NOT forgive one another for our sins.

But I’d like you to listen to two verses.   Mathew 16, verses 18 & 19.   This is Jesus speaking;  “And I say to you, that you are Peter, and upon this rock, I will build My church, and the gates of hades shall not prevail against it.”    We’re probably all familiar with that verse.  And we know that the “rock” that Jesus was going to build His church upon, wasn’t Peter, but rather, it was the TRUTH that Peter had just declared in  verse 16,  when he said;  “Thou art the Christ, the Son of the living God.”

Jesus told Peter, that He would “build” His salvation, upon the foundational truth, that Jesus is the Christ, the Son of the living God.  Now listen to what Jesus tells Peter, in  verse 19;

Some people would say that the “keys” were the opportunity that Peter was given to preach the gospel, on the day of Pentecost, in Jerusalem, thereby “opening the doors” to the kingdom, which is the church.

But that’s not exactly what the “keys” were.  Please listen so you understand clearly.  The “keys” that were given to Peter, was not the “opportunity” to preach the gospel.  But rather, the “keys” were the very WORDS of the gospel that Peter preached on the day of Pentecost.

Peter wasn’t speaking his own words that day.  Peter was speaking God’s words.  You could consider Peter’s words, as words of prophecy.  Peter told those people on the day of Pentecost, what would come to pass, if they obeyed, these words of God.  It’s just like Peter wrote in  2 Peter 1, verse 21;  “For no prophecy was ever made by an act of human will.  But men moved by the Holy Spirit, spoke from God.”

Here are the words of prophecy, that Peter spoke that day;  “Repent, and let each one of you be baptized, in the name of Jesus Christ, for the forgiveness of your sins, and you SHALL RECEIVE the gift of the Holy Spirit.”   Acts 2, verse 38.

Listen closely.  The keys that were given to Peter, were the words of God.  And with those keys, Peter would be able to bind things on the earth, and also loose things on the earth.  In this verse, and also in a similar verse in  Mathew 18, verse 18,  where Jesus speaks about binding and loosing, the word “bind”, means..  “to put in bonds”, like when you put someone in prison.  And it means..  “to declare to be illegal”.

And the word “loose” means..  “to loosen from bonds”, or to free someone from prison.  And it also means..  “to declare to be legal”.

Some of the words Peter spoke that day, “bound people in their sins”.  For instance, Peter said in  Acts 2, verse 23;  “This man, delivered up by the predetermined knowledge of God, YOU nailed to a cross, by the hands of godless men, and put Him to death.”

Peter declared their actions to be illegal, and bound them in their sins, by the word of God.  And then to further bind them in sin, he said in  verse 36;  “Therefore let all the house of Israel know for certain, that God has made Him both Lord and Christ, this Jesus whom you crucified!”

And the people were pierced to the heart, and they said in  verse 37;  “Brethren, what shall we do?”

So again, moved by the Holy Spirit, Peter once again uses the keys that Jesus gave to Him, and he declares to the people, what is legal in the sight of God, and he tells them how to be loosed from the bonds of sin.  And here are the keys, or in other words, here are the words, that would unlock the forgiveness of their sins..

Verse 38;  “And Peter said to them;  Repent, and let each one of you be baptized in the name of Jesus Christ, for the forgiveness of your sins, and you shall receive the gift of the Holy Spirit.”

The words that Peter spoke that day, could either bind, or they could loose.  It all depended on how the words were received.  If they were received with obedience, they would loose a person from the bonds of sin, and bring forgiveness.  But if those words were rejected with disobedience, then they would bind a person IN their sins, and lock them OUT of the kingdom of heaven.

Peter was the first one to ever be given the keys to the kingdom.  But he wasn’t the only one that the keys were given to.   Jesus spoke to all the apostles at the same time, in  Mathew 18, verse 18,  and He told them all, the very same thing that He had first told Peter.   Jesus said;  “Truly I say to you, whatever you bind on the earth, shall be bound in heaven.  And whatever you loose on the earth, shall be loosed in heaven.”

The complete will of God was finally be made known to man, first by Jesus Himself, and then by the very Spirit of God.

Jesus said;  “But when He, the Spirit of Truth shall come, He will guide you into ALL truth; For He will not speak of His own initiative, but whatever He hears, He will speak, and He will disclose to you, what is to come.”   John 16, verse 13.

The apostles could NOT forgive sins, but they were given the words that COULD bring forgiveness.  And we have those very same words today, right here with us, in the bible.  And although we can’t forgive anyone’s sins, we CAN tell them HOW to be forgiven, by God.

Hear, believe, repent, confess, and be baptized.  Then, continue faithful unto death.