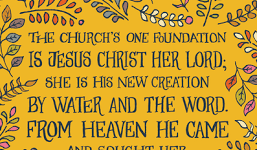 The Church’s One Foundation

I have been enjoying the opportunity to converse back and forth with a man of the Catholic faith.   And one of the things that we’ve been talking about is the church’s foundation.  In other words, what or whom, is the church of our Lord, built upon?   Jesus said in  Mathew 16, verse 18;  “I will build My church, and the gates of hades shall not prevail against it.”

Now, exactly what did Jesus build His church upon?  Well, you might say, judging from those verse that we just read, that he built His church upon His resurrection, and the power of His resurrection, because if it hadn’t been for His being raised from the dead, the church would have never been established.  But that’s not exactly what the scriptures say that the church was built upon.

In  Mathew 16, verse 18,  Jesus said;  “And upon this ROCK I will build My church, and the gates of hades shall not prevail against it.”   Well, that’s all well and good, “upon this rock”.  But upon what rock?  What’s the “Rock” that Jesus built His church upon.  Was His resurrection the “Rock”?  Was He the “Rock”  Was someone else the “Rock”?

Would the definition of the word translated “Rock” help us?  Let’s take a look and see.  The word translated “Rock” comes from the Greek word “petra”.  Here’s the definitions of “petra”.  “Petra”  means..  “A mass of connected rock”.  A solid or native rock, rising up through the earth.  A huge mass of rock, such as a projecting cliff.”   Some have called it a “bed-rock”.

Now those definitions fit perfectly with the analogy given by Jesus in  Mathew 7, verses 24 & 25;  “Therefore, everyone who hears these words of Mine, and acts upon them, may be compared to a wise man, who built his house upon the rock (same word used here).  And the rain descended, and the floods came, and the winds blew, and burst against that house, and yet it did not fall, for it had been built upon the rock!”

That house was built upon a bed-rock, wasn’t it?  It was built upon a mass of rock, that came up out of the earth, and it wasn’t going anywhere!  So then that’s the KIND of a rock, that Jesus said He’d build His church upon.  That was a wise choice, wasn’t it?  This rock that supports the church that Christ built, isn’t going anywhere.  And neither is the church that’s supported BY the rock.  Both the rock, and the church, are eternal.

Jesus is eternal, maybe the “rock” is Jesus Himself?  Jesus is actually metaphorically compared to a rock, in  1 Corinthians 10, verse 4.   In speaking of Israel, as they wandered in the wilderness, it says;  “And they all drank the same spiritual drink.  For they were drinking from a spiritual rock which accompanied them.  And the rock was the Christ.”   Same word there, translated “rock” as in  Mathew 16, verse 18.

Also, it’s interesting that in  Deuteronomy 32, verse 18,  Moses rebukes the sons of Israel, for leaving God.  He says;  “You have neglected the Rock who begot you, and forgot the God who gave you birth.”   It’s interesting that the old Hebrew word translated “Rock”, means..  “a large flat rock, a boulder, and a cliff”.

It’s almost exactly like that Greek word “petra”.  A “bed-rock”.   It says in  Psalm 62, verse 2;  “He alone is my rock and my salvation.  My stronghold;  I shall not be greatly shaken.”   That’s just like that house that Jesus spoke of, that was built on the rock,;  “..And the rain descended, and the floods came, and the winds blew, and burst against that house, and yet it did fall;  For it had been built upon the rock.”

That house was just like the Psalmist, neither one could be shaken.

Now, when we consider Israel, who was accompanied through the wilderness by the spiritual Rock, which was the Christ, we understand that wasn’t referring to the church that Jesus built.  The sons of Israel as an assembly, are compared to the church.  It was the old testament “shadow” of the true church.  But it wasn’t the church.

And when king David, the Psalmist, said;  “I shall not be greatly shaken”, he spoke of the fact that his faith, wouldn’t be shaken, because of the “Rock” that his faith was built upon.  And the new testament also talks about our faith, and how it’s built on the solid foundation of Jesus Christ.

In teaching others, Paul laid the foundation, of faith in Jesus, as the Christ.  In other words, Paul was converting people to Christ.  And then other people would come after Paul and continue to further teach those new Christians, more about Christianity.  That’s what he meant when he said;  “I laid a foundation, and another is building upon it.”

Now, let’s continue reading, beginning with  verse 11;  “For no man can lay a foundation, other than the one which is laid, which is Jesus Christ.  Now, if any man builds upon the foundation, with gold, silver, precious stones, wood, hay, straw;  Each man’s work will become evident, for the day will show it.  Because it is to be revealed with fire, and the fire itself will test the quality of each man’s work.”

This verse might deserve a little comment also.  Again, Paul is talking about teaching people the gospel, and he says that Jesus Christ Himself, is the one and only foundation that can be laid, in teaching the gospel.  Everything depends upon Jesus Christ.  Then Paul speaks figuratively, when he lists the various ways a person might build upon that foundation of Christ.  He gives the analogy of building something physical, and using various materials in building.  And he begins with the very finest of materials, and progressively goes down to the least advantageous of earthly materials.  And he says a person can build upon the foundation with gold, or silver, or precious stones.  Or he can simply use wood or hay or even straw.

But he says;  “Each man’s work will become evident, for the day will show it.”  And it’s kind of like the day when the rains came and the floods and the wind, and one house stood, but the other one fell.  Only in this analogy, it’s not floods and wind that are going to test the building, but it’s the quality of the work is going to be revealed with fire!  “And the fire itself will test the quality of each man’s work.”

Now that’s got to be an allusion to the last day, when “we will all appear before the judgment seat of Christ, that each one may receive the deeds in the body..”   2 Corinthians 5, verse 10.

So then, picture this..  You, or someone else, lays the foundation of faith in Jesus Christ, in a person’s heart.  Then you build upon that foundation, through the further teaching of the word, and maybe even by your faithful example of a Christian.  Maybe you’ll remember this verse from a lesson several weeks ago.  1 Timothy 4, verse 12;  “Let no one look down on your youthfulness (or in the case of some of us; Let no one look down on your age)..   But rather, in speech, conduct, love, faith, and purity, show yourself to be an example of those who believe.”

Good advice, isn’t it?  Be an example, build upon the foundation of Christ.  But either way, whether you teach the word of God, or whether you exhibit the words of God, you build up the faith of another.  And then on the day of judgment, if that person’s faith stands up to being judged by the word of God, you’ll both be rewarded.

But even if that person’s faith doesn’t hold up to the test of “fire” so to speak, you’ll still be saved.  You still did God’s will.  And you’ll be rewarded for doing His will.  But somehow, it sounds like there will be an “extra joy” to be had, if we help bring someone else, with us to heaven.

And so passages like this one, and like that one in Psalm 62, verse 2,  where David said;  “He alone is my Rock and my salvation, my stronghold!  I will not be greatly shaken.”   These passages speak of Jesus, as being the foundation of our faith.  But is Jesus also the foundation of His church?  Is Jesus the “Rock” upon which he built His church?  “Upon this Rock, I will build My church.”  Jesus said.

So, did He build it upon Himself?  Some people say, NO! Jesus didn’t build His church upon Himself;  He built it upon Peter.   Mathew 16, verse 18  says;  “And I say to you, that you are Peter, and upon this Rock, I will build My church.”    Is Peter, the “rock” that Jesus promised to build His church upon?  Is it the statement, that “You are Peter” is that what Jesus is comparing to a Rock?

Let’s see whether or not the rock is Peter Himself.  You remember how in the old testament, Hebrew names all had a meaning?  Like the name Abram, meant “exalted father”.  But the name Abraham meant “father of many”.  Well, the name Peter means something .  It’s almost the same word, as the word “petra”.  Remember what that word means?  It means.. “a mass of rock, a solid or native rock coming up out of the earth, a projecting cliff, a bed-rock”.

It’s pretty hard to throw, a projecting cliff, or a mass of rock coming up out of the earth.  And so the words “petros” meaning Peter, and “petra” meaning the bed-rock, stand in stark contrast to one another.  So then, what exactly was Jesus saying, when He said;  “I say to you, that you are Peter, and upon this Rock, I will build My church”?

Back up just three verses, to  Mathew 16, verse 15.  Jesus asks His disciples;  “Who do you say that I am?”  And Peter answers and says;  “Thou art the Christ, the Son of the living God!”  And Jesus says in the next verse;  “Blessed are you Simon Barjona..  (that was Peter’s proper name Hebrew)  “Blessed are you Simon Barjona, because flesh and blood did not reveal this to you, but My Father who is in heaven”

So Jesus says;  “Blessed are you, Simon Barjona..”  And then Jesus says in  verse 18;  “And I say to you, that you are Peter..”   You see, Jesus doesn’t call him Simon Barjona here does He?   He calls him Peter instead.  And do you know why Jesus calls him Peter?  It’s because Jesus is going to make a point, using the name Peter.  And here’s the point that Jesus makes..

“And I say to you, that you are Peter..  (You are a stone, a small rock that a man might pick up along the road)  “..Moreover..  (most translations say “and”, but the word is commonly translated “moreover” or “indeed”.

So,  “..You are Peter, moreover, upon this Rock, I will build My church.”   Well, if Peter is simply a stone, and the “rock” is a bed-rock, then the rock can’t be Peter.  So who is the “Rock”?   Jesus asked, “Who do YOU say, that I am?”  And Peter says;  “Thou art the Christ..”   Then Jesus says to Peter, this is who you are.  He wasn’t belittling Peter, He was simply making an analogy, for the sake of clarity.  But many people still miss the clarity.  Peter said;  “Thou art the Christ, the Son of the living God”, and Jesus says;  “Blessed are you Simon Barjona..  And moreover, Upon this ROCK I will build My church, and the gates of hades shall not prevail against it!”   Exclamation point!

Jesus is our rock and our fortress.  Jesus is the one and only foundation of our faith.  And the fact that Jesus is the Christ, the Son of the living God, is the “bed-rock” truth upon which He built His church.

“For NO man can lay a foundation, other, than the one which is laid, which is Jesus Christ.”