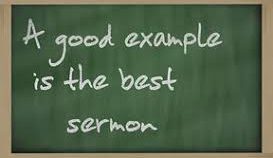 Are Some Bible Examples Binding Upon Us As Law?

That’s a question that causes a lot of division within the body of Christ.  However, we’re specifically commanded in  1 Corinthians 1, verse 10;  “..that you all agree, and there be no divisions among you. But you be made complete, in the same mind, and in the same judgment.”   How do we rectify the problem?

I’ve never heard anyone claim that ALL examples in the bible, are binding upon us to follow as “law”.  But nearly everyone thinks that SOME examples are binding, and therefore should be treated exactly the same, as a command is treated, and that is, as “law”.   But if we believe that some of the examples given in the bible, are to be treated as law that we need to follow, and obey, then how do we determine WHICH examples must be followed as law?  Who gets to choose?  You or me?  Or did some people from years past, already choose for us?

So you see the problem, don’t you?  Some people have taken the stance that NO example is ever binding as law.  You can follow an example if you want to, but don’t try to bind it on everyone else, and say that they must follow it, or suffer God’s disapproval.  There are literally hundreds of examples in the bible, of Christians doing this, or Christians doing that.  What gives us the right to take some of those examples, and bind them as “law” upon every Christian that lives?  It’s one thing to bind something upon yourself, because you believe that’s how you should conduct yourself.  But it’s entirely different, to bind that particular thing upon someone else, let alone on everyone else.

I read one man’s opinion, that God is perfectly able to make His will known to us when He wants to.  And that when God wants to give us a law to obey, He comes right out and says it.  Just like the ten commandments;  Very distinct laws for us to obey.  And there’s plenty of statements just like that in the new testament also, Where God comes right out and tells us plainly, what He wants us to do.

For instance;  In  Acts 17:30,  it tells us plainly;  “Therefore, having overlooked the times of ignorance, God is now declaring, that all men, everywhere, should repent!”   And of course it’s stated plainly in other places too.  Like in  Acts 2:38,  when Peter said;  “Repent!, And let each one of you be baptized..”

But of course we know, that even when God DOES declare something that plainly, there are still going to be people who won’t believe it.  Like “Repent, and be baptized”, it’s pretty clear that both of those things are commanded, and most people don’t have a problem with the command to repent, but for some reason, they sure don’t like the command to be baptized!

But aside from people’s absolute refusal to obey God, does GOD bind some examples upon us as law?  We don’t have the power or authority to bind anything, upon anyone!  Only God can do that.  So then, what’s the answer?  Has God given us any examples in the new testament, that He has also bound upon us a law, that we must adhere to?

If God has bound us, to follow some examples as law, then He would have to tell us as much.  That would be God’s obligation to us!  And that fact is born out in  Romans 4:14;  “For the law brings about wrath; But where there is no law, neither is there violation.”   And also  Romans 5:13  tells us;  “But sin is not imputed, where there is no law.”

Therefore, for God to be able to hold us accountable to something, as a law, He would be obligated to somehow, inform us, of the existence of that law.  God would have to make us aware of that law.

So then, we should actually change our question a little bit.  Instead of asking if there are any examples in the bible that God binds upon us as “law”, we should ask;  Has God made us “aware of the fact” that some examples are binding upon us as law?  Or, are no examples binding?

Either God has given us sufficient evidence, to make us aware that some examples are binding, or, they’re simply not binding!  It’s that simple.

Listen to this verse of scripture..  It’s  1 Corinthians 14, verse 37;  “If anyone thinks he is a prophet, or spiritual, let him recognize, that the things which I write to you, are the Lord’s commandments.”   That’s a pretty important thing to recognize, isn’t it?  The things which we read from the letters of Paul, aren’t the opinions of Paul, they’re the commandments of God!   And  verse 38  says;  “But if anyone does NOT recognize this, he is not recognized!”

So with that in mind, listen to some of what is written, which as we’ve just been told, are the Lord’s commandments..  First,  1 Peter 2:21;  “For you have been called for this purpose, since Christ also suffered for you, leaving you an example, for you to follow in His footsteps..”

God has just let us know, that there are some examples given in the bible, that we are to follow!  We have just been commanded, to follow the example of Christ.  The next two verses actually specify a couple of the traits of Jesus, that we need to follow.  Here’s  verse 22;  “..who committed no sin, nor was any deceit found in His mouth.”   We’re commanded to follow that example.  Can we do it perfectly?  NO.  But are we to do our best in following that example?  Yes, we are.

And here’s  verse 23;  “And while being reviled, he did not revile in return.  While suffering, He uttered no threats, but kept entrusting Himself, to Him who judges righteously.”   Those are examples that we are specifically commanded to follow.

As a side note here, maybe you remember a few weeks ago, that I told you about someone who claimed that those words I just read, “For by His wounds, we are healed”,  means that we are healed physically, because Jesus was “wounded” physically.  That’s a perfect example of taking a verse, or a part of a verse, out of context, and trying to make it say something that it doesn’t say.

But, back to our examples.  God commands us to follow in the footsteps of Jesus, and to follow His example.  But that’s not the only example that God commands us to follow.  Listen to  1 Corinthians 11:1;  “Be imitators of ME, as I also am of Christ.”   That’s Paul writing those words.  He’s the one who wrote,  “..the things that I write unto you, are the Lord’s commandments.”

Listen to  1 Corinthians 4:16;  “I exhort you therefore, be imitators of ME.”   And  Philippians 3:17;  “Brethren, join in following MY example, and observe those who walk according to the pattern you have in US.”

Now, who is the “us”, that he’s talking about?  The “us” must be the apostles, who were guided by the Spirit of God, in their actions, and in their teachings, and in their writings.   Go has never told us to follow the lead of un-inspired men.

Now, when God tells us to imitate the “pattern” that we have in the apostles, isn’t God commanding that we do so?  Isn’t God commanding, that we follow in the footsteps of Jesus?  Of course He is!  If God says to do it, then it’s a command to do it.  That means, that at least some of the things that Jesus did, and at least some of the things that the apostles did, are “law”, and we are obligated by God, to do the same.  Is an example binding?  Sometimes it certainly is!

Therefore, the claim that NO examples in the bible are binding, is simply false!  There’s no truth to it.  But the problem still remains;  Which of these examples are binding, and which are not?  We’ve already seen that it’s impossible for us to bear the sins of others, on the cross.  So then we’re obviously not required to follow an example, that’s impossible to follow.  But what about things that ARE possible for us to accomplish.  Is every example, that’s within our capability of imitating, bound upon us by God, as “law”?

Common sense alone would tell us that every example, couldn’t be binding upon us as “law”.   Now remember, we’re only considering examples of what Jesus did or said, and also examples of what the inspired men of God, did and said.   No one else’s examples have any bearing on what God approves of, or commands.  And the scriptures never imply that they do.

Philippians 3:17  tells us to  “OBSERVE those who walk according to the pattern you have in us”.  That word, “observe”,  means to notice, and to contemplate, those people who walk according to the pattern.  Take note of what pattern they’re following.  They can be an example of faithfulness, and they can be an encouragement to us.  But they’re not the ones who set the pattern.  Jesus, and the men inspired by God, set the pattern.  They’re the ones who “bind” things on earth.  Remember what Jesus said to His apostles, in  Mathew 16:19;  “..And whatever you bind on earth, shall be bound in heaven, and whatever you loose on earth, shall be loosed in heaven.”  Their words COME  from heaven, that’s why whatever they say, is ALREADY bound in heaven.  That’s why everything they say, is bound upon us, and even some of the things that they DID, are bound upon us.

There were a couple of times though, when Peter’s actions were NOT approved of by God.  For example;  Remember when Peter was hypocritical, when he had begun eating with the gentiles, but then later, refused to eat with them?  But in that case, Paul comes right out and says;  “But when Cephas came to Antioch, I withstood him to his face, because he stood condemned.”   (Galatians 2:11)

And remember when Peter tried to withstand the will of God by saying that Jesus should NEVER have to suffer and die?  And Jesus rebuked him and said;  “Get behind Me satan!”  Some examples of the apostle Peter, were clearly condemned!  Not set as examples for us to follow.

Just a quick example of that would be,  Acts 3, verse 1.  Here’s what it says;  “Now Peter and John were going up to the temple, at the ninth hour, the hour of prayer.”   That was approved of by God, but that doesn’t mean that we need to go up to a temple and pray at the ninth hour.  Of course not.

That’s a good place to stop at for today.  I guess you could say, I’m going to leave you in suspense.  But I hope you’ll think about why, some things would be bound upon us, while other things wouldn’t.