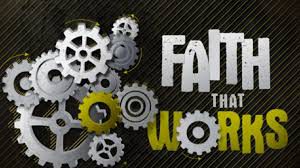 “You See that a Man is Justified by Works, and not by Faith Alone”  James 2:24

In last week’s article, I stated that our salvation is “based” on Jesus.  Jesus is the “source of salvation”, Heb 5:9.  And He is the “foundation”,  1 Cor 3:11.   But yet, both faith and works, are mandatory, and essential components of our salvation.

“Without faith, it is impossible to please Him;  For he who comes to God, must believe that He IS, and that He is a rewarder of those who seek Him.”   Hebrews 11:6.

There is “faith” to be acquired and cultivated, and there is “work” to be done, in order to be saved.  If anyone is opposed to the word, “work” being associated with salvation, then you can just as properly use the word, “deeds”.   There is faith to be had, and deeds to be done.

Now, there are more than one kind of “deeds” that we can do.  For instance, there are good deeds, and there are evil deeds.  Jesus pointed that out very plainly, in  John 5:28 & 29;  “Do not marvel at this, for an hour is coming, in which all who are in the graves (that means everyone who has ever lived and died) shall hear His voice, and shall come forth.  Those who did good (or, good deeds) to a resurrection of life;  Those who did evil (or, evil deeds) to a resurrection of condemnation (or, judgment).”

And just like there’s more than one kind of deeds, there’s also more than one kind of faith.   To illustrate that, God asks us a question, in  James 2:14;  “What use is it, my brethren, if a man says he has faith, but has no works?  Can that faith save him?”  In  verse 19,  God says;  “..the demons believe and tremble!”

So that’s one kind of faith.  We could call it “claimed faith”.  We can claim to have faith, but it’s not the kind of faith that has any value concerning salvation.  “Can that faith save you?”  God is trying to get us to understand, that the answer is NO!  Faith that is not coupled with deeds, is worthless.

“Was not Abraham, our father, justified by works, when he offered up Isaac his son, on the alter?  You see that faith was working with his works..”   His faith was “working”.  It was a “working faith”;  That sounds so easy to understand, yet it cause so much difficulty for the “faith only” crowd.   The verse goes on to say;  “..and as a result of the works, faith was perfected, and the scripture was fulfilled, which says;  And Abraham believed God, and it was reckoned to him as righteousness, and he was called, the friend of God.”   James 2:21 thru 23.

The faith that cannot save you, is “useless and dead”.  While the faith that CAN save you, is “working and perfected”.  The useless and dead faith, stands alone, and the working and perfected faith, is coupled with works.  The bible says it, multiple times, and in multiple ways, and with such clarity, that there can be NO misunderstanding the truth about it.

There is only one thing that remains, to be clarified and understood, and that is;  What KIND of works, does the bible say, must be coupled with our faith, so that our faith can be perfected, and become a “working faith”, that can save us?  Now, before we let the bible answer that question, I want to say, that I want you to understand this subject so well, that not only are YOU convinced, of the facts concerning salvation, and faith and works;  But I want you to be able to explain it to someone else, in such a way, as to leave no doubt about what the bible says.

Of course, we can’t force someone to believe what the bible says, but at least they’ll KNOW what it says.

So, what kind of works, must be coupled with our faith, in order to save us?  I already read the answer, when I quoted  James 2:21.  Here it is once more;  “Was not Abraham, our father, justified by works, when he OFFERED UP Isaac his son, on the alter?”

The offering up of Isaac, upon the alter, was the “work” that perfected Abraham’s faith, and that justified him.  What was Abraham doing, when he offered up his son Isaac?  Was he fulfilling a plan that HE had devised, to save himself?  Not hardly.  Who’s plan was Abraham fulfilling, by offering up his son?  He was fulfilling, and obeying, GOD’S plan!  God had planned a way, to test Abraham’s faith.   The test was, will you obey My plan?

God laid out His plan, in  Genesis 22, verse 2.  But, before I read the plan, let me read  verse 1;  “Now it came about after these things, that God tested Abraham, and said to Him;  Abraham!  And he said; Here I am!”   So I wasn’t just dreaming that up, when I said that God had a plan, to test Abraham.

Here’s the plan;  Verse 2;  “Take now your son, your only son, whom you love, Isaac, and go to the land of Moriah, and offer him there, as a burnt offering, on one of the mountains of which I will tell you.”

That was quite a plan, and quite a test.  But Abraham complied with the plan, and therefore, he passed the test.  Abraham didn’t argue about the plan.  We’re told in  verses 3 thru 10,  that Abraham got up early in the morning, and saddled his donkey, and split wood for the offering, and he took with him his son, and they went to the land of Moriah.  And Abraham built an alter, and he laid out the wood, and he bound Isaac and laid him upon the wood, and he took a knife, and he stretched out his hand to slay his son!  And the Lord stopped him!

And the Lord said, in  verse 12;  “..For now I know that you fear God, since you have not withheld your son, your only son, from Me.”   You don’t just “say” you believe, but you have coupled your faith, with your actions, and you have made your faith, “complete”.

And when Abraham did all that he did, God says in  James 2:21,  that Abraham was doing “works”.   But someone might say;  Abraham wasn’t “working”;  All he was doing was obeying what God had told him to do.  Yes, he was!  And that is exactly the point.  All anyone needs to do, is to obey what God has told us to do.  And WHEN we do, God calls it “works”, or “deeds”.  We are doing deeds of obedience, and works of obedience!

I said last week, that you have to “use” your faith.  And that’s exactly what God is saying, when He said;  “You see that faith was working, with his works..”   Abraham was “using” his faith, when he obeyed God.

But when we read in the bible, of something that God tells us to DO, and then we DO it..  Now there’s a deed, and a work that saves us.  “You see that a man is justified by works, and not by faith alone.”   James 2:24.

Philippians 2:12  tells us to  “..work our your own salvation.”  And you do that by obeying what God has told you to do.

Ephesians 2:10  tells us;  “For we are His workmanship, created in Christ Jesus, for good works, which God prepared beforehand, that we should walk in them.”   God has created us in Christ, to do His will, it’s as simple as that.

Has God told you to do something, in order to be saved?  Absolutely He has.  Even believing is a “work”, because believing is something that God tells us to do.  Jesus said;  “If you believe NOT, that I am He, you will die in your sins.”  John 8:24.  Do you want to accomplish His work?  Then you’ve got to believe.

Is confessing the name of Jesus, a “work”?  What does Jesus say?  “If you confess Me, before men, I will confess you, before My Father who is in heaven.”  Mathew 10:32.

What about everything else, in the new testament, that God has told us to do?  Everything that God’s word tells us to do, is a “work”, that has been prepared beforehand, for us to walk in.

Jesus Christ is the source of salvation to everyone who OBEYS Him!  “Works of obedience” will make your faith complete, and they will save you.  “Work out your own salvation, with fear and trembling.”  In other words, with reverence and obedience to God’s word.

Can you explain this to everyone who doesn’t understand, that we are NOT saved by faith alone!  That’s exactly what  James 2:24  says.  But people don’t believe it, because they don’t understand it.  So, can you explain it to them?

Can you show them how there’s two kinds of faith?  There’s a useless, and dead faith, that can’t save anyone, because it stands alone.  And then there’s that “working faith”, that’s coupled with obedience, and so it’s complete.  That’s the faith that saves us.

And can you tell them how there’s also two kinds of “works”, or “deeds”?  Again, there’s the “deeds” that are completely useless, when it comes to salvation.  They’re deeds that God has said absolutely nothing about.  Maybe some of those deeds give you pleasure, and entertainment, and enjoyment, but they sure don’t have any part in saving you.

Can you tell people what God said about Abraham?  How when Abraham offered up his son Isaac, that he was doing “works”.  And how his “faith, was working with his works, and as a result of the works, his faith was perfected.”

Maybe if all of us, tell all of this, to everyone we know, then maybe the world will start believing, that you have to do work, in order to be saved.  Maybe we’ll only get one or two people to believe, but wouldn’t that be worth it?  Luke 15:7,  tells us that there’s joy in heaven, over even one sinner who repents.

“We must do the work of Him who sent Jesus, while it is day.  For night is coming when no man can work.”