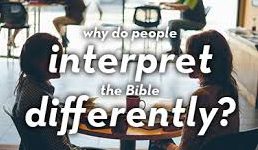 “The Bible Is Open To Interpretation”

You’ve hear that one before, haven’t you?  That’s almost like saying, the bible means anything that I want it to mean.  That’s an awfully presumptuous attitude isn’t it?  Proverbs 13:10  says;  “Through presumption, comes nothing but strife.”  Presumption is synonymous with pride and arrogance.  When a person is too proud to listen to the words of God, he “presumes” that God’s word is “open to interpretation”.  Well, the bible is only open, if YOU will take the time to open it!  And the bible is only open to ONE interpretation, and that is GOD”S interpretation!  Jesus said, in  John 12:48;  “He who rejects Me, and does not receive My sayings, has one who judges him;  The word that I spoke, will judge him at the last day.”  If you think that you’re going to be judged by your own private interpretation of God’s word, then I’ll start praying for you right now, because you’re going to need all the prayers you can get.

Please listen to  2 Peter 1:20 & 21;  “But know this first of all, that no prophecy of scripture is of one’s own interpretation;  For no prophecy was ever made by an act of human will, but men spoke from God, as they were moved by the Holy Spirit.”  Now notice that the part about “one’s own interpretation” is referring to the one who made the prophecy, not to the one hearing the prophecy.  In other words, the people who spoke and wrote the words of God, weren’t speaking their own interpretation of God’s word, but rather, they were speaking and writing, literally, as they were “moved by the Holy Spirit”.  God personally choose the men who spoke His word.  And if God wouldn’t allow them to interpret what He wanted them to say, why on earth would He allow YOU to personally interpret what it means?

Friends, this is serious business, that’s why I’m pleading with you to take it seriously.  “Therefore, knowing the fear of the Lord, we persuade men.”  (2 Corinthians 5:11).  “For we must all appear before the judgment seat of Christ, that each one may be recompensed for the deeds in the body, whether good or bad.”  (V-10).  We all need to open the bible, and study it, learn what it says, and what it means.  We are urged by God, in  2 Timothy 2:15;  “Be diligent (study) to show yourself approved unto God, a workman who needs not to be ashamed, correctly discerning the word of truth.”  There is only one “correct discernment” of any verse of scripture, and God is pleading with us to be diligent enough to come to the knowledge of that correct meaning of His word. God,  “desires all men to be saved and come to the knowledge of the truth”.  (1 Timothy 2:4).  But you’ll never understand the truth (and you’ll never be saved) if you think that the bible is “open” to your own personal interpretation.

Only if you “Humble yourselves therefore, under the mighty hand of God, that he may exalt you at the proper time”  (1 Peter 5:6),  will you ever have any chance of “coming to the knowledge of the truth”, and being saved.  “I know O Lord, that a man’s way is not in himself, nor is it in a man who walks, to direct his own steps”  (Jeremiah 10:23).  That’s exactly why the bible is NOT “open to interpretation”!  Because we don’t have the ability to interpret it on our own.  We need GOD, to interpret His word for us.

I quote all these verses of scripture to you, so that you know, that I’m not just giving you my opinion, I’m giving you God’s opinion!  Someone said; “The bible is it’s own best commentary”, and that’s true.  The bible doesn’t use those exact words, but here’s the words that it does use;  Isaiah 1:18  says;  “Come now, let us reason together, saith the Lord.”  God says; “Let US reason together”.  That means you and God. If you don’t understand one particular verse, or passage of scripture, then let the other verses of scripture, that speak about the same subject, explain it to you.  That’s what it means to “reason together with God”. You might say;  Let His word, explain His word.  God will interpret His own word for you, IF you will take the time required, to learn ALL of what the bible says.

The apostle Peter wrote, in  2 Peter 1:2 & 3;  “Grace and peace be multiplied to you, in the KNOWLEDGE of God and of Jesus Christ. Seeing that His divine power has granted to us, everything pertaining to life and godliness, through the true KNOWLEDGE of Him who called us by His own glory and excellence.”

When you KNOW what the bible says, you won’t feel the need to have to interpret what the bible means, because your knowledge will have made it clear.  We’re told in  Proverbs 9:10;  “The fear of the Lord is the beginning of wisdom, and KNOWLEDGE of the Holy One is understanding!”  Knowledge will give you the understanding.  It’s also a fact that the more faith you have, the less interpretation you will need. Let me give you a few examples..

Jesus said, in  Luke 13:3;  “Unless you repent, you will all likewise perish.”  If you believe that, no further interpretation is needed;  You will repent.  But what if you don’t want to repent? Then you’ll most likely need to re-interpret that statement also.

I’m sure you get the point.  Let’s all pray, that everyone would open their bibles, and read God’s interpretation, and believe it, and simply obey it!  “Though He were a Son, yet He learned obedience from the things that He suffered.  And having been made complete, He became the source of salvation to all those who obey Him.”  (Hebrews 5:8 & 9).

As you study God’s word, and gain the knowledge that God wants us all to come to, may He bless you with the understanding, and the humility, to obey the things that He tells us to do, in order to be saved.

Your comments and questions are always greatly appreciated.