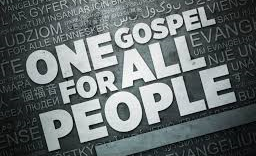 What Is The Gospel ?

What if we could heal people of illnesses, simply by loving them?  Wouldn’t that be great.  We could heal our family members, and our close friends.  If we had enough capacity to love, we could heal everyone.  But what would happen to the people who don’t have anyone to love them?  Would they simply have to remain sick, and possibly die?  What if someone came to them and said;  I’ve got good news, we’ve found someone who loves you so much, that you don’t have to be sick, and you don’t have to die!   That would be really good news, wouldn’t it?

Well, listen to this good news..

John 3:16  says;  “For God so loved the world, that He gave His only begotten Son, that whosoever believes in Him, should not perish, but have everlasting life.”   That’s good news isn’t it?  That’s the gospel!  The good news of God’s love, and of His salvation.

Here’s some good news from the old testament..

Jeremiah 30:17  says;  “For I will restore health to you, and your wounds I will heal, declares the lord..”

Psalm 107:20  says;  “He sent out His word and healed them, He delivered them from their destruction.”

Even though those three statements are from the old testament, they are a part of the gospel.  You know what the word “gospel” means, right?  It means..  “good news”, or “glad tidings”.  Actually, the word specifically means..  “God’s good news”.

God’s good news, is that He has a plan for our salvation.  That’s not only good news, that’s great news, because without God’s plan, we’re doomed!   And those old testament verses that talk about healing our wounds, are talking about our spiritual wounds.  They are talking about the fact that God has a plan to save us from our sins.  And anything that’s connected with the fact that Jesus died for our sins, is a part of the gospel.  It’s the “good news”, that we are NOT doomed!  There is a way for us to be saved!

Listen to this part of the gospel..

1 Peter 2:24  says;  “And He Himself bore our sins in His body on the cross, that we might die to sin, and live to righteousness;  For by His wounds, you are healed.”

And this one;  1 John 4, verse 10  says;  “In this is love, not that we loved God, but that He loved us, and sent His Son to be the propitiation for our sins.”   A propitiation, is an appeasing sacrifice, or an atoning sacrifice.   “For by His wounds, you are healed.”   By His sacrifice, we are healed!

That’s the best news anyone could ever get.  That you can be healed because of the love that God has for you.

Here’s some more of  “God’s good news”.   If you would, turn to  Colossians chapter 1,  and follow along as I read  verses 13 thru 20;  This is going to be speaking about God, and about Jesus.

“For He (God) delivered us from the domain of darkness, and translated us to the kingdom of His beloved Son.  In whom we have redemption, the forgiveness of our sins.  And He is the image of the invisible God, pre-eminent of all creation.”

“For by Him all things were created, in the heavens and on earth, visible and invisible. whether thrones or dominions, or rulers or authorities.  All things have been created by Him, and for Him.”

“And He is before all things, and in Him, all things are held together.”  That reminds me of  Hebrews 1, verse 3,  which says that Christ, “upholds all things by the word of His power.”

Back to Colossians..  “He is also the head of the body, the called out.  And He is the beginning, the first-born from the dead, so that He might come to have first place in everything.”

“For God was well-pleased, for all the fullness to dwell in Him;  And through Him, to reconcile all things to Himself, having made peace through the blood of His cross, through Him, whether things on earth, or things in heaven.”

That’s the gospel;  That’s “God’s good news” for all people, for all times, since the beginning of time.  The bible says in  Ephesians 3:11;  “This was in accordance with the ETERNAL purpose, which He carried out in Christ Jesus our Lord.”   All the things that we just read about, from the book of Colossians, were planned by God, before the creation.  But of course, everything that we just read, is just a portion of the gospel.

One gospel, purposed from eternity, and announced to man, in varying degrees, and at various times, throughout the history of the world.  For instance;  Here’s what God said to Satan, in  Genesis 3:15;  “And I will put enmity between you and the woman, and between your seed and her seed.   And He will bruise your head, and you will bruise his heal”;  Most people believe, that refers to how Jesus will “bruise Satan’s head” so to speak,  by overcoming sin.  And if that is the case, then that is a part of the gospel.  It doesn’t go into much detail, but it speaks about Jesus, being the remedy for sin.

Noah also preached God’s good news.  Listen to what the apostle Peter says, in  1 Peter 3, verses 18, 19, and 20;  “For Christ also died for sins, once for all, the just for the unjust, in order that He might bring us to God, having been put to death in the flesh, but made alive in Spirit.”   That is the gospel!

Now listen to what Peter says next;  Jesus was “made alive in Spirit, in which also He went and made proclamation to the spirits in prison, who once were disobedient, when the patience of God kept waiting, in the days of Noah, during the construction of the ark..”

While Noah was building the ark, he was also preaching, that men should obey God.  And God was patiently waiting, as Noah preached, just like God waits today, as we preach.  But Noah was just like all the other prophets of God.  It was the prophet doing the speaking, but it was God telling them what to say.

I hope that you can see from these examples, that God’s gospel, has been being preached, from the beginning of time, until this very day.  It was simply not preached in it’s entirety, until after Christ had fulfilled, God’s gospel plan.

And how many salvations are there?   Jude wrote, in  Jude verse 3;  “..I was making every effort to write to you about our common salvation..”   You know what “common salvation” means, don’t you?  It means that there’s only ONE salvation, that’s shared by everyone who is saved.

So then, there’s one God and Father, who planned from eternity, that the one Christ, would be sacrificed one time, for the one salvation that is common to all.  And the “good news” of that, is the one gospel of God.

Now here’s something that I’d really like you to pay attention to.  The people who were saved under the old covenant, were saved by the same gospel that people today are saved by.  Keep in mind exactly what the gospel is.  The gospel is the “good news” that Jesus Christ has been sacrificed for the forgiveness of sins.   1 John 2, verse 2  says;  “And He Himself is the propitiation for our sins, and not for ours only, but also for the whole world.”   And the fact is, that He is not only the propitiation for the sins of everyone living today, but Jesus is also the propitiation for the sins of everyone who has EVER lived!

And to prove that, I’ll go to  Hebrews 9:15,  which says;  “..He is the mediator of a NEW covenant, in order that since a death has taken place, for the redemption of the transgressions that were committed under the FIRST covenant, those who have been called, may receive the promise of the eternal inheritance.”

The reason that a NEW covenant had to be established, to replace the first covenant, is because, “It is impossible for the blood of bulls and goats to take away sins.”  Hebrews 10, verse 4.

If you’ve been a member of the Lord’s church for a long time, you’ve probably heard the saying, that the blood of Christ flows both directions.  It flows back in time, to cover the sins committed before Christ was crucified, and it flows forward, to cover all the sins that will ever be committed in the future.

Let me leave you with one more thing to understand about the gospel.  The gospel, and the new covenant, are not the same thing.  And neither was the gospel the same thing as the old covenant.  The part of the bible that we refer to as the Old Testament, includes more than just the first covenant that God established with the people of Israel.  The Old Testament does indeed include the laws of the first covenant, but it also includes the “Patriarchal laws”, which governed the conduct of people prior to the Law of Moses.  And, as we’ve already seen, the Old Testament also includes the preliminary preaching of the gospel, which is the good news about the coming Christ.

Now, consider the part of the bible that we call the New Testament.  The New Testament includes a much more detailed explanation of the gospel of Jesus Christ.  As a matter of fact, the apostle Paul said, in  Ephesians 3:9 & 10;  “To me, the very least of all saints, this grace was given, to preach to the Gentiles, the unfathomable riches of Christ (that’s the gospel), and to bring to light, what is the administration of the mystery, which for ages has been hidden in God who created all things..”

And of course, one of the most important things that the New Testament teaches us, is how to become a Christian.  Until a person becomes a Christian, the gospel is of no use to them.  The gospel is the good news of the sacrifice of Christ, for the forgiveness of sins.  But if we never enter into the new covenant with God, the covenant that is revealed in the New Testament, then the “good news” of Christ, has fallen on deaf ears.

Then we’re told that we must repent of our sins.  Jesus said;  “Unless you repent, you shall all likewise perish.”  Luke 13:3.

And we’re told that we must confess the name of Christ.  Romans 10:10  says;  “With the heart, man believes unto righteousness, and with the mouth, he confesses unto salvation.”

And of course we’re told in  Acts 2:38,  to “Repent, and let each one of you be baptized, in the name of Jesus Christ, for the forgiveness of your sins, and you shall receive the gift of the Holy Spirit.”

If you enter into the new covenant with God, then the gospel will be the greatest news you’ve ever heard!