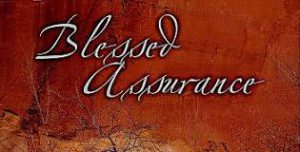 Blessed Assurance, Jesus is Mine

There’s a song that we sing sometimes called “Blessed Assurance”.  “Blessed assurance, Jesus is mine.  Oh what a foretaste of glory divine.”   Don’t you want the blessed assurance, that if your life ended today, or if Jesus returned today, you’d be with Him eternally?  You don’t want to worry about eternity, I know you don’t.

We’re told in  Philippians 46 & 7;  “Be anxious for nothing.. (the KJV says; “Be careful for nothing”, do not be full of cares.) ..but in everything, by prayer and supplication, with thanksgiving.. (don’t forget the thanksgiving part of prayer, because that could very well be the most important part.  God already knows what you want.  And He knows what you need.  And actually, He knows if you’re thankful or not, but He wants to hear it in your prayers) ..let your requests be made known to God.  And the peace of God, which surpasses all understanding, shall guard your hearts and minds in Christ Jesus.”

That kind of peace, and that kind of contentment, only comes from being fully assured, that God is in control, and that he is with us, and that we are with Him.  There shouldn’t be any doubt in anyone’s mind that God is in control.   “For He spoke and it was done, He commanded and it stood fast.”  (Psalm 33:9)   He “upholds all things by the word of His power.”  (Hebrews 1:3)   “The Most High IS the ruler over the realm of mankind..”  (Daniel 4:32)   “And we KNOW that God cause all things to work together for good, to those who love the Lord, who are the called according to His purpose.”  (Romans 8:28)

So God is clearly in control;  And He is with us, if we will be with Him, and love Him.  Hebrews 10:22  says;  “Let us draw near with a true heart, in full assurance of faith, having our hearts sprinkled from an evil conscience, and our bodies washed with pure water.”

Everybody wants the assurance that they’ll be saved, but most people only believe, part of the bible.  For example, everyone believes  John 3:16;  “For God so loved the world, that he gave His only begotten Son, that whoever believes in Him, should not perish, but have eternal life.”   And we know and believe that “without the shedding of blood, there is no forgiveness of sins.”  (Hebrews 9:22)   It’s like, that almost goes without saying.

But there is no assurance in faith alone, because the bible says that faith alone is useless, and it’s dead!  James 2, verses 17, 20, and 26.   For some reason, people think that there’s no room for anything but faith.  How odd, considering what the bible says.

What about living a moral life?  Is there room for that in your salvation?  Is that not absolutely necessary, for us to be saved?   Listen to  Ephesians 5:5;  “For this you know with certainty!  (certainty is assurance!)  ..That no immoral or impure person, or covetous man, who is an idolater, has an inheritance in the kingdom of Christ and God.”   Morality holds a pretty important place with God doesn’t it?  Without it, you have no inheritance.   Morality isn’t “faith only” is it?

When we talk about living a moral life, as God commands us to do, we’re talking about obeying God!   We wouldn’t have the slightest idea of what morality is, if it weren’t for the fact that the bible tells us, what is moral, and what is immoral.  Morality comes from God.  And so, to live a moral life, is to obey God.  But that word “obey”, that’s a dirty four letter word to the “faith only” crowd.  They cringe just at the sound of that word..  “Obey” wow, don’t say that!

So, here’s the question that you’ll get from a “faith only” advocates, when you try to tell them that God requires our obedience.  They’ll say;  “Well how much obedience is enough, or how little is enough?  How are we supposed to know?”   And I think to myself..  How little?  are you serious?  You really want to know how little you can do to be saved?  Seriously?

If you have to ask how much or how little obedience is required, then you’ve completely missed the point!  The point isn’t how much or how little, but the point is, if God said it, just prove your faith, and do it!  Sometimes I like to repeat what our brother Ed Watts used to say.  He said;  There are no “optional” commands.  You either obey everything that the Lord has said, or, you’re guilty.  Isn’t that what God tells us in  James 2:10;  “For whoever keeps the whole law, and yet stumbles in one point, he has become guilty of all!”

How much obedience do you have to give to God?  Complete obedience, that’s how much.  And if you have to ask how little you can get by with, well, I guess it really doesn’t matter, because your never going to be saved with that attitude anyhow.  How little can I do for you in return for the suffering, and the humiliation, and the rejection, and the pain of the crucifixion, and for dying, in my behalf?  What’s the least amount of obedience I can give you for that Lord?

Philippians 2:8  talks about Christ’s perfect life, and perfect obedience;  “And being found in appearance as a man, He humbled Himself, by becoming obedient to the point of death, even death on a cross.”

But some people go to extremes again, and they say;  Well you’re saying that God demands perfect obedience form us, just like Christ.  We can’t do that!  Of course we can’t do that.  that’s the whole purpose for Christ, because He could do that, and he did do that!

1 Peter 2:24  says;  “Who Himself, bore the sins of us, in the body of Him, on the tree (that’s the cross) that we having died to sin, might live to righteousness.  For by His wounds, we are healed.”   By His perfect obedience, we are healed for our imperfect obedience.  You and I will never be perfect, but do you think that the suffering of Jesus, is going to heal you, if you don’t even try?  What if you just make a “token effort”, every once in a while, you know, when you’ve got time.   Do you really think that’s gonna save you?

Here’s what Jesus said one time, to a congregation of His people;  “So because you are lukewarm, and neither hot nor cold, I will spit (or vomit) you out of My mouth.”   Rev 3:16    You’re not giving it all you’ve got.   He told another congregation, in  Rev 2:4;  “But I have this against you, that you have left your first love.”   You’re not trying anymore.

Let’s go back to  Hebrews 10:22  once again.  Remember what it says?  “Let us draw near with a true heart (with a sincere heart.  If you want assurance, you’ve got to be sincere) ..with a sincere heart, in full assurance, (now listen to this next part) having our hearts sprinkled from an evil conscience, and our bodies washed with pure water.”

Some people think that the reference to sprinkling has to do with being baptized, and that sprinkling is a form or baptism.  But that’s not the case at all.  The very meaning of the Greek word “baptizo” is “to immerse, or to dip repeatedly, or to plunge”.  Metaphorically, it means to be “overwhelmed”.  Sprinkling is not a “form” of baptism at all.

But the word “sprinkle” in that verse, DOES refer to being cleansed.  The word is only used four times in the bible.  In  Hebrews 9:13,  it speaks of “the blood of goats and bulls, and the ashes of a heifer, sprinkling those who have been defiled, and sanctifying them, for the cleansing of the flesh.”   So, in this verse, we see PEOPLE being sprinkled.

Now listen to  Hebrews 9:19;  It says that Moses “took the blood of the calves and the goats, with water and scarlet wool and hyssop, and sprinkled both the book itself and all the people.”   There we’ve got people, and a book, being sprinkled.

Now  verse 21;  “And in the same way, he sprinkled both the tabernacle and all the vessels of the ministry with the blood.”   Now we’ve got “things” being sprinkled.

Those are the verses in the new testament that talk about sprinkling.  So we see that sprinkling was a manner of applying the blood from the animal sacrifices, for the purpose of cleansing.  Not for the actual forgiveness of sins, because animal blood can’t do that.  Only Christ’s blood can forgive sins.   No person, and no thing, was ever baptized in blood.

Now,  Hebrews 10:22  talks about our hearts being “sprinkled from an evil conscience”.   It’s your heart that’s being sprinkled.  So once again, the sprinkling of the blood, under the old covenant, was for the purpose of cleansing things.  Whether people or things were sprinkled, it was for the purpose of cleansing.   So then what does the idea of our conscience being sprinkled represent?   Well, it’s only logical, that it refers to our conscience being cleansed of evil thoughts.  We can only have assurance of God’s salvation, if our minds, that’s what your conscience is, you mind;  So we can only have assurance of salvation, is our minds are cleansed from evil thoughts.  And that includes false teachings, that are contrary to the teachings of Christ, and of the bible.

Now, what does it mean to have our bodies washed with pure water?    That word “washed”, refers to being “totally washed”, in other words, the “whole body” gets washed.   It doesn’t refer at all to water being sprinkled on us.  But it’s interesting to note, that the word is in the passive tense.  In other words, the one being washed, is not the one doing the washing.  You are being washed by someone else, rather than you washing yourself.

So then, what exactly is that referring to?  How are our entire bodies “washed” by someone else?  And what does “pure water” mean.  The scripture says that our bodies are “totally washed with pure water”.

Well, the word “pure” simply means, without being mixed with anything else.  Just pure water.  The word figuratively can mean, unstained, guiltless, innocent, and upright.”  AND, it is used in the scriptures, literally, ceremonially, spiritually, and figuratively.   So then how does someone, “wash our bodies with pure water”?  And who is it, that does the “washing”?  Well, there’s not one word in the new testament that describes any kind of literal washing of our bodies, that is associated with being assured of salvation.  But there is a verse which specifically speaks of water saving us, but it specifically states that the purpose is NOT for cleaning the body.

1 Peter 3:21  says;  “And corresponding to that.. (Peter had just talked about how Noah and his family were saved by water, when they were in the ark)  ..and corresponding to that, baptism now saves you.  NOT the putting away of the dirtiness (or the filthiness) of the flesh, but the appeal of a good conscience toward God, through the resurrection of Jesus Christ”.

When we’re baptized, we’re not washing ourselves.  We are appealing to God, because of what our conscience is telling us, is the right thing to do, to cleanse us of our sins, because of the resurrection of Jesus Christ.  It’s because of His death burial, and resurrection, that we can be forgiven of our sins.  And it’s only when our sins have been forgiven, that we can have any kind of assurance, of being saved, at the last day.

If you’re NOT in Christ, then the only assurance that you have, is that you will NOT be saved.  You can be assured of that!