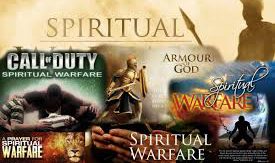 There’s a Battle Going On!

Jeremiah 32:17  says;  “Ah Lord God!  Behold Thou has made the heavens and the earth by Thy great power, and by Thy outstretched hand.  Nothing is too difficult for Thee.”

Nothing hampers God from doing exactly what He wants to do.  There’s nothing that poses a problem for God, and He certainly isn’t faced with any “battle” with anyone or anything.  God is in complete and absolute control of all things, at all times.

Sometimes people think that God is in a battle with Satan, with “the spirit of evil”.  But that’s not true.  Everything, including evil, is in utter subjection to the almighty God of heaven.  Evil spirits don’t want anything to do with God.

Maybe you remember this passage from  Mathew 8:28 thru 30.   Listen to what it says;  “And when He (Jesus) had come to the other side, into the country of Gadarenes, two men who were demon-possessed, met him as they were coming out of the tombs.  They were so exceedingly violent, that no one could pass by that road.”

“And they cried out saying;  What do we have to do with You, Son of God?  Have You come here to torment us before the time?  (They didn’t want Jesus anywhere around them)  Now there was at a distance from them, a herd of many swine, feeding.  And the demons entreated Him saying;  (they were basically begging Jesus)  “If you are going to cast us out, send us into the herd of swine.”

We have power, given to us from God!  If you feel tempted to disobey God, and you resist that temptation, by displaying your faith in God, that spirit of disobedience isn’t going to stick around very long at all.  IT will flee from YOU!  God guarantees it!

So then God isn’t in any battle with evil, and He never has been.  There is a battle going on, but the battle is between you, and the devil, and between me, and the devil.  We are fighting a battle ever day of our lives.  And if we choose to fight the battle all by ourselves, we’re gonna lose!

That’s why the bible tells us, to be “strong in the Lord, and in the strength of HIS might.”  Ephesians 6:10.  Don’t try to be strong in YOUR might, because you don’t have enough might!  But be strong in HIS might.  He’s got enough might for all of us.  And  verse 11  says;  “Put on the full armor of God, that you may be able to stand firm against the schemes of the devil.”

The “armor of God” are the things that God gives us, to help us win the battle.  Here’s what the “armor of God” consists of;  It’s listed in  Ephesians 6, verses 14 thru 17;  The Armor includes.. truth, righteousness, the foundation of the gospel, faith, salvation, and the word of God.  Those are the things that God has provided for us, to enable us to not only fight the battle, but guarantee, that we win the battle!

By using truth, and righteousness, and faith, and the gospel, and by relying on our own salvation, the bible says, we will be able to  “stand firm against the schemes of the devil.”  The KJV calls it “the wiles of the devil”.   That refers to the methods that the devil uses against us, in order to tempt us, to disobey God.  His methods are “schemes”, and they’re crafty, and they’re deceitful.  They’re the “wiles of the devil”.

That word “wiles” reminds me of “Wiley Coyote” from the Roadrunner cartoons.  Who likes the Roadrunner cartoons?  Old Wiley always had a scheme going, didn’t he?  And he was pretty crafty.  But he wasn’t very smart, it always backfired on him didn’t it?  But he never gave up;  He was always there with another scheme.  And the devil’s not ever going to give up either.  He’s always gonna be there with another scheme to tempt us.  And he’s a whole lot smarter than ‘ole Wiley Coyote.  And if you try to go it alone, you’re gonna lose the battle.  Not because the devil is smarter than you, but because he’s a deceiver!

But what if we’ve always got God along with us?  What’s gonna happen then, to all those “wiles of the devil”, if we’ve got God, right there with us?

Maybe you remember these words that God spoke to Joshua, in  Joshua 1, verse 9;  “Have I not commanded you?  Be strong and courageous!  Do not be dismayed, for the Lord your God is with you wherever you go.”   That’s a promise;  “The Lord is with you, wherever you go.”

Of course there was a condition that went along with that promise.  God said in  verse 5;  “I will be with you, I will not fail you nor forsake you.”  But then God said in  verses 7 & 8;  “Only, be strong and very courageous;  Observe to do according to all the law which Moses My servant commanded you.  (Of course for us, the condition would be, Observe to do all that Jesus Christ, My servant commanded you)  Do not turn from it to the right, or to the left, so that you may have success wherever you go.  This book of the law shall not depart from your mouth, but you shall meditate on it day and night, so that you may be careful to do according to all that is written in it.  For THEN, you will make your way prosperous, and THEN you will have success.”

Those are the same conditions that our spiritual success depends on.  First, be strong and courageous.  We’re told in  2 Timothy 1, verse 7;  “For God has not given us a spirit of cowardice, but of POWER, and love and self-control.”  We shouldn’t be timid, or cowardly, because God has given us power!

And here’s the next thing that the Lord says to do;  “Observe to do.. (some versions say, be CAREFUL to do.  Be careful, don’t be deceived)  “Be careful to DO, according to ALL of the law which was commanded you.”  For the Israelites, that was the law of Moses.  For us today, it’s the new covenant law of Christ.  “Do not turn from it, to the right, or to the left..”  In other words, don’t turn in ANY direction from the law of God.  Just do what it says!

The verse goes on to say;  “..so that you may have success wherever you go.”  You wanna’ have success spiritually?  You wanna’ be able to win the battle?  Then obey God completely!   If someone says you can do less, that’s the spirit of evil trying to deceive you.  If the Lord says go, then you go.  If He says come together, you come together.  If He says do, then you do.  And we’ve got the whole new testament to tell us exactly what to do.

What’s next on the Lord’s list of conditions?  Well, here’s what it says;  “This book of the law, shall not depart from your mouth..”  That means you should never stop talking about it.  One time Peter and John were told to stop talking about Jesus.  Do you remember what they said?  “For we CANNOT stop speaking, what we have seen and heard!”  (Acts 4, verse 20)   That’s they way the word should be with us.  It’s always in our mouth, we can’t stop talking about it.

The prophet Jeremiah said one time, in  Jeremiah 20, verse 8;  “Because for me, the word of the Lord has resulted in reproach and derision, all day long.”  Preaching God’s word brough Jeremiah a lot of trouble.  But this is how he felt about NOT speaking the word of God..  Verse 9;  “But if I say, I will NOT remember Him, or speak any more in His name, then in my heart it becomes like a burning fire, shut up in my bones, and I am weary of holding it in.  And I cannot endure it!   Jeremiah HAD to speak the word of God!  It had to come out.  And that’s how you and I need to be;  We should not be able to keep the word inside of us, it’s gotta come out!

“This book of the law shall not depart from your mouth, But you shall meditate on it, day and night, so that you may be careful to DO, according to all that is written in it.”   That word “meditate” doesn’t ONLY mean, to think about it, or to ponder it.  It also means to speak about it, to talk about it.  The word carries both meanings.  Here’s a good way to look at it;  When you’re all alone, don’t stop pondering, and meditating on the word of God.  And when you’re not alone, don’t stop talking about it.  I wonder if people would leave you alone more, if you did that?

If they did leave you alone, you’d have more time to talk to God.   Talking to God is like a “time out” from our struggle, from our battle.  It’s the time to get a little rest, and to get re-energized, and to get our minds focused again on what’s important in this life.  And what’s important in this life, is preparing for heaven;  Preparing for eternity.

Let me read that from the KJV;  “For we wrestle not, against flesh and blood.  But against principalities, against powers, against the rulers of the darkness of this world, against spiritual wickedness, in high places.”

Our battle is against spiritual wickedness in “high places”, it’s against wickedness “in the heavenly places”.  But again, this isn’t a battle that tales place in heaven.  This isn’t God’s battle, it’s our battle.  The phrases “In high places”, and “in the heavenly places” refers to things “related” to heaven, not IN heaven.  It refers to things like, the bible, the word of God.  There’s a lot of spiritual wickedness, against the word of God.  And it refers to things like truth, and faith, and morality, and things pertaining to God Himself.  These are the things that the fight is over.  It’s not over physical things, the fight is over spiritual things.

I’ll close with the same words we usually close with;  In order to win the battle, we must hear the word, and believe the word, and obey the word.  And repent of your sins, and confess the name of Jesus Christ, and be buried in baptism, for the forgiveness of your sins.  And the most important part, for all of us here today;  Remain faithful unto death.  The battle really begins AFTER  you’ve believed, and repented, and confessed, and after you’ve been baptized.  The battle really begins when you commit yourself to God.  Satan has lost you then, but he’s gonna fight with everything he has, to get you back.  Don’t lose the battle.