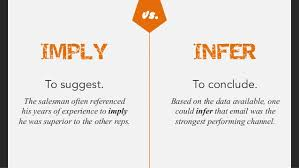 The Scriptures Have Implications

Many times, when we say things, we also imply more than is said.  For instance, if I were to ask you; “Will you take me to lunch today?  I’m implying, will you pay for lunch today.  And as we read the bible, many things that the bible says, have implications.  But a lot of times, our minds aren’t always on the same track, with God’s mind, and so we misunderstand what God is saying.   Sometimes we fail to see what HAS been implied, and then other times, we infer something that was NEVER implied.  It can work both ways.

Let me give you an example, from a discussion I was having this past week.  I was trying to explain to someone about the importance of baptism, and I was stressing that baptism needs to take place as soon as possible after someone believes and repents.  And I actually used the story about the Ethiopian eunuch, from  Acts 8,  as an example, where Philip was preaching “Jesus” to the eunuch, and as soon as they came to some water, the eunuch said;  “Look, water!  What hinders me from being baptized?”  (V-36)   And Philip said;  “If you believe with all your heart, you may.”  And the eunuch said;  “I believe that Jesus Christ is the Son of God!”  (V-37)   And so they stopped, and Philip immediately baptized the eunuch.

And in response to this, the fella I was talking to said;  So then you’re saying that if water isn’t immediately available, we shouldn’t share the gospel with someone at that time?  And I thought, Where did that come from?

Do you see how he inferred something that was never implied?  I never said that we shouldn’t share the gospel unless there was water right there in the vicinity.  As a matter of fact, there wasn’t any water around, when Philip first started to preach to the Ethiopian.  It was only after they had travelled down the road a ways, that they came to some water.  We’re not told that Philip expected there to be water anywhere along that road.  But Philip didn’t hesitate to preach the word, like God wanted him to.

What I was stressing, was that baptism is of such importance, that it should never be delayed!  But again, that fella inferred something that was never implied.  The bible certainly does imply that you should never delay being baptized, once you come to believe.  That’s why Ananias told Saul, in  Acts 22:16;  “And now, why do you delay?  Arise and be baptized, calling on His name.”  But the bible sure doesn’t imply that we shouldn’t preach the word, just because there’s no water in the immediate vicinity.

Paul told Timothy, in  2 Timothy 4, verse 2;  “Preach the word, be instant in season, and out of season..”  So then, preach it all the time!  It doesn’t matter if there’s any water around.  I’m sure we could find some water, if someone wants to be baptized.

Here’s an example of the bible actually implying something, but the majority of people not understanding what’s been implied.  The word “believe” is at the heart of this misunderstanding.  A lot of times, when the bible uses the word “believe”, it’s implying a lot more than just believing.  But people don’t understand the implied meaning.  Possibly the most popular verse in the bible, is misunderstood, because people aren’t able to see the implied meaning of the word “believes”.  The verse is  John 3:16;  “For God so loved the world, that he gave His only begotten Son, that whoever BELIEVES in Him, should not perish, but have eternal life.”

The implication that’s not understood, is the fact that the word “believes” in that verse, implies obedience to God’s word, as well as belief in His word.  When we understand the whole teaching of the bible concerning salvation, How that Jesus “..became the author of salvation to all those who obey Him”  (Heb 5:9),   then we understand the implication there.  But people who don’t have a good foundation in bible teaching, don’t understand that implication.  The last verse in  John  chapter 3,  actually tells us what’s being implied.

Do you see the implication?  The word “believes”, is being contrasted with the words “does not obey”.   You either believe, or you do NOT obey.  The obvious implication is that, in this verse, and in so many other verses as well, the word “believe”, implies obedience to that which you believe.  To believe is also to obey, and to NOT believe, is to NOT obey.  He who BELIEVES, has eternal life, but he who does NOT OBEY, will never see life.  The implication is clear, but yet most people don’t see it, or they refuse to see it, because they refuse to believe in the necessity of obedience.

I wish that the King James, and other versions, would’ve gotten this translation correct.  But those versions simply say;  “He who believes has eternal life, but he who does not believe shall never see life..”  And so the implication of the word “believe”, and the importance of understanding that implication, is hidden.  So then, failing to correctly understand, or failing to infer, what has been obviously implied, causes people to believe a lie, and to remain lost.  That lie being, that all you have to do to be saved, is to believe.

Here’s an example of someone inferring something, that is NOT implied.  And the result is going to be the same.  A lie is going to be believed, and people are gonna remain lost.    This example is from  1 Corinthians 12:13;   “For by one Spirit, we are all baptized into one body, whether we be Jews or Gentiles, whether we be bond or free;  And have been all made to drink, into one Spirit.”

1 Corinthians chapter 12  begins with Paul explaining how the various spiritual gifts, given in the first century church, were all given by the same Spirit of God.  And Paul concludes that thought with these words, in  verse 11;  “But one and the same Spirit, works all these things, distributing to each one individually, just as He wills.”

Now  verse 13  says;  “Also, by one spirit, we were all baptized into one body.  Whether Jews or Greeks, whether slaves or free..”

So Paul speaks of one Spirit, and he speaks of being baptized into one body.  And he says;  “Thus also is Christ”;  So then Christ also, is one.  One Christ, one Spirit, one body.  Does that remind you of  Ephesians chapter 4?   One Lord, one Christ, one Spirit, one body..   And how many baptisms are there, according to  Ephesians 4, verse 5,  There is “one baptism”.   Therefore, the baptism spoken of here in  1 Corinthians 12, verse 13,   must be, that one baptism.  If there’s only one, then this must be the one, right?  Remember, we can’t infer something from one verse, that’s going to contradict another verse.  So then we can’t infer that this is another baptism being referred to here in  1 Corinthians.  It must be the same, “one baptism”.

Verse 13  says;  “..we were all baptized into one body.”   Galatians 3:28  says;  “..all of you who were baptized into Christ..”   Romans 6:3  says;  “..all of us who were baptized into His death..”   Acts 2:41  says;  “So then, those wo had received his word, were baptized, and there were added that day, about three thousand souls.”   Now those aren’t contradictions, are they?  No, they’re all simply describing different aspects of what takes place upon baptism.  And here’s another aspect of what happens;  Acts 22:16  says;  “And now, why do you delay?  Arise and be baptized, and wash away your sins..”  And here’s another aspect of it;  Galatians 3:28  not only says that you were “baptized into Christ”, but it also says, “you have clothed yourselves with Christ.”

So then we’ve got six different aspects, of what happens upon just one baptism.  You’re baptized into one body, into Christ, into His death, you clothe yourself with Christ, your sins are washed away, and you’re added to the number of the saved.  Any contradictions?  No. Anything to indicate that the one baptism isn’t necessary?  No, quite to the contrary;  without the one baptism, you’re not in the body, your not in Christ, your not added to the saved, you’re not clothed with Christ, and you’re sins aren’t washed away.  Wow, you talk about necessary!

But let me ask you a question;  The bible says baptism is an immersion in water, symbolizing our death to sin, and the burial of the old sinful self, and our resurrection to walk in newness of life.  So my question is;  Who baptized you?  Was it another person, or was it the Spirit of God?  In every example in the bible, of someone being baptized, it was another person doing the baptizing.  So then what does it really mean, in  1 Corinthians 12:13,  when it says;  “By one spirit, we were all baptized into one body”?   Does it mean that it was really the Spirit of God who was baptizing us, and not another person?

What really is being implied in that verse?   There’s one small little word in that verse, that will help us understand what’s being said.  Most translations say “BY one spirit, we are all baptized..”  And that gives the impression that it’s the Spirit doing the baptizing.  It would be like saying;  “One Spirit, baptizes all of us.”.  But we know from the rest of the scriptures, that it isn’t literally the Holy Spirit of God, who baptizes us into the body, and into Christ, and into the forgiveness of our sins, and so forth.  We know that it’s always another person who baptizes us.  So then, is it some kind of a figurative statement, when the bible says “BY the spirit, we are all baptized..”?

Actually, it’s not a figurative statement.  First of all; The word “By”, is not a good translation.  The words “in” or “with”, are much more accurate for our understanding.  As I said, using the word “by” gives the impression that it’s the Spirit doing the baptizing.  The words..  by, with, within, among, and in;  are all proper translations of the word originally used here.  But which one of those words is the best one to use in a given verse, is determined by the context of the verse.

Here’s an example of the same word in a couple other verses;  Mathew 1:18  speaks of Mary, and the original wording is;  “..she was found IN womb, having child..”  The word “child” is implied.  She had a child IN her womb.  She didn’t have a child “with” her womb, or “by” her womb, but she had the child “IN” her womb.  Some versions say;  “She was with child”.  So they change the words around a little bit, but it means the same thing.

Remember what Jesus told Nicodemus, in  John 3, verse 5?  “Unless one is born of water and the Spirit, he cannot enter into the kingdom of God.”   The Spirit is the word of God.  And the Spirit is the attitude of God, and it’s the essence of God.  And if we don’t possess that same attitude, and that same spirit, that the word of God teaches us to have, then our baptism would be in vain.

“With one spirit, we were all baptized into one body..  and we were all made to drink, of one spirit.”  We “drink” so to speak, of the one spirit of God, and we’re baptized, all with that one spirit within us.

So, it’s important to understand, what’s implied by the words we read, and what’s not implied.  And that’s why we need to keep studying the bible.  “Study to show thyself approved unto God, a workman who needs not to be ashamed, correctly discerning the word of truth.”  (2 Timothy 2:15)