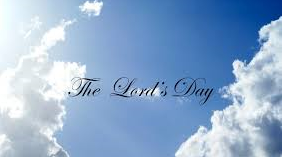 Was John out of his body on that day?  I don’t think so;  There’s nothing in that verse to indicate that.  You could say, that we are always “in the spirit”, simply because we are spirit.  We are a spirit, temporarily housed in a physical body.  Therefore, you might say that if you were deep in prayer, or deep in meditation, that you were “in the spirit”.  In other words, when you’re engaged in prayer or meditation, you are exercising your “spiritual side”.

Is that what John meant when he said that he was “in the spirit”?  Was John saying that he happened to be deep in prayer at this particular moment?  I used to think that’s what was meant here, but when we consider the wording of the verse, and the whole verse, and even the next few verses, we’ll see that’s not what is meant here..

Let’s read the whole verse,  Revelation 1, verse 10;  “I was in the Spirit on the Lord’s day, and I heard behind me, a loud voice, like of a trumpet.”  Now let me read  verse 12;  “And I turned to see the voice that was speaking with me, and having turned, I saw seven golden lampstands, and in the middle of the lampstands, one like the Son of Man, clothed in a robe reaching to His feet, and girded across His breast with a golden girdle.”   So John not only “heard”, but he also “saw”.  John saw a vision, and he heard a voice like a trumpet.  He saw a vision of Jesus Christ, and heard Christ’s words.

John’s vision, what he saw and heard, were the direct result, of him being “in the Spirit”.  Let me give you an example of something similar to this.   Acts chapter 2, the day of Pentecost.   Verse 4  says;  “And they were all filled with the Holy Spirit, and began to speak with other tongues, as the Spirit was giving them utterance.”

The Holy Spirit, came upon the apostle John, on that Lord’s day, and caused him to see a vision of Jesus Christ, and to hear His words.

What day has enough significance, in relation to the Lord, that God would call it the Lord’s day?  Ask your self this;  How many days are there, that the bible specifically mentions by name, in relation to the Lord?  There’s only two days mentioned by name, and there’s one more day spoken of, by implication, you might say.  The two days mentioned by name are the Sabbath day, and the first day of the week.  There is one more day specifically mentioned in the bible, that’s related to the first day of the week, and that day is Pentecost.  Pentecost is the fiftieth day after the Passover Sabbath.  You count seven more Sabbath days, which makes 49 days, plus one more day, which makes it the fiftieth day, or, the first day of the week.

For example, here’s what it says in  Luke 23:50 thru 55;  “And behold, a man named Joseph, who was a member of the Council, a good and righteous man (he had not consented to their plan and action) from Arimathea, a city of the Jews, who was waiting for the kingdom of God;  this man went to Pilate and asked for the body of Jesus.  And he took it down, and wrapped it in a linen cloth, and laid Him in a tomb cut into the rock, where no one had ever lain.  And it was the preparation day, and the Sabbath was about to dawn.”

So, the “Sabbath was about to dawn”, therefore, the day Jesus was crucified was a Friday, the day before the Sabbath.  Now, the crucifixion of Jesus was indeed a very significant event, and it occurred on a Friday, however the bible doesn’t mention another thing about that day.  And so that by itself, wouldn’t lead us to believe that Friday could be “the Lord’s day”, even though Jesus was crucified on that day.

That doesn’t sound like the kind of criteria that would cause the Sabbath day, to be honored, by being called “the Lord’s day”.  Think about it;  The only complete day when Jesus’ body was in the tomb, and the only complete day when His soul was in hades;  Would that be something to honor?  The fact that Jesus laid in the tomb for that full day, actually has nothing to do with our salvation.  So then would that be something that would make the Sabbath day worthy, of being called the Lord’s day?  I don’t think so!

What other things happened on the Sabbath day?  Maybe there was something else that would elevate the Sabbath day.  Well for one thing, that was the day when Jesus was in the habit of going to the synagogue.  That’s what we’re told in  Luke 4, verse 16;  “And He came to Nazareth, where He had been brought up, and as was His custom, He entered the synagogue on the Sabbath, and stood up to read.”

So it was the “custom” of Jesus, to go to the synagogue on the Sabbath.  But then, that was also the “custom”, of almost every other Jew alive.  That was simply a Jewish custom.  So that wasn’t anything specific to Jesus.  It certainly isn’t any reason to refer to the Sabbath as “the Lord’s day”, when every other Jew did exactly the same thing.  If anything, the Sabbath is the “Jew’s day”.  And it actually was the Jew’s day.  It was their day of rest.

OK then, what else happened on the Sabbath?  Was there anything else that specifically occurred on the Sabbath, that was related to Jesus?  How about this;  Jesus healed people on the Sabbath.  One such incident is recorded for us in  Mark 3:1 thru 5.   The bible says in  verse 1;  “And He entered again into a synagogue, and a man was there with a withered hand.”  And it says in  verses 4 & 5;  “And He said to them;  Is it lawful on the Sabbath to do good or to do harm, to save a life or to kill?  And after looking around at them with anger, grieved at their hardness of heart, He said to the man;  Stretch out your hand.  And he stretched it out, and his hand was restored.”

But then, Jesus healed everywhere He went, not just when He went to the synagogue.  and I’m sure that He healed every other day of the week also.  So then just because Jesus healed on the Sabbath, that wouldn’t make that day any different from any other day.

There is absolutely no evidence in the bible, that would indicate that the Sabbath day, could be referred to as “the Lord’s day”.

The First Day of the Week

So then Jesus was resurrected, “early on the first day of the week”, and He first appeared to “Mary, THE Magdalene”.   Now that’s pretty significant.  Romans 8:29  tells us that Jesus is “the first-born among many brethren.”  And  Colossians 1:18  says that “He is the beginning, the first-born from the dead, so that he might have first place in everything!”   And the day I which Jesus was “born from the dead” was the first day of the week.

He was the “first-born”, on the “first day”, in order to have “first place”, in everything!  Now that’s significant!

What else happened on the first day of the week?  Remember how Jesus was crucified and died on a Friday?  But the scriptures never mention Friday as being significant.  But the scriptures do mention, repeatedly, the significance of the death of Jesus;  Not the day He died, but His very death itself.  For example, the apostle Paul wrote, in  1 Corinthians 15, verse 3;  “For I delivered to you, as of first importance, what I also received;  That Christ died for our sins, according to the scriptures..”   The significance of Christ’s death, cannot be overstated!

How about the significance of the Lord’s supper?  We’re told in  1 Corinthians 11:26;  “For as often as you eat this bread, and drink this cup, you proclaim the Lord’s death until he comes!”  We proclaim the Lord’s death!  that’s pretty significant!  And which day do we do that on?  Acts 20, verse 7  tells us;  “And on the FIRST of the week, when we came together to break bread..”  The first day of the week, is “THE day” that God has chosen for His disciples to come together for the Lord’s supper, and to proclaim His death.

When was the next time that Jesus appeared to His disciple?   John 20, verse 26  tells us;  “And after eight days, again His disciples were inside, and Thomas with them;  Jesus came, the doors having been shut, and stood in their midst, and said;  Peace be with you.”  So if you count the day that Jesus first appeared, which was a Sunday, then eight days would bring you back again to Sunday;  Sunday, Monday, Tuesday, Wednesday, Thursday, Friday, Saturday, and Sunday;  Eight days.

Now I would have thought that Jesus would have ascended back to heaven on the first day of the week, but evidently He didn’t.   Acts 1:3  says;  “To these He also presented Himself alive, after His suffering, by many convincing proofs, appearing to them over forty days..”  And the bible says in   verse 4;  “And gathering them together, He commanded them not to leave Jerusalem, but to wait for what the Father had promised..”

What they we’re promised, is specified in  verse 8;  “But you shall receive power, when the Holy Spirit has come upon you..”  And immediately after that, Jesus ascended back to heaven;  Verse 9.

Sunday, The Day of Pentecost