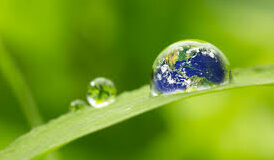 Isn’t that interesting?  That your bones, are 31 % water?  If that’s true, that’s hard to believe.

Water is pretty important when it comes to life, isn’t it?   It’s said that a person can only live maybe three to four days without taking in water.  Water provide LIFE, doesn’t it?

When scientists go around looking for signs of life, elsewhere in the universe, it seems that the first thing they look for, are signs of water.

Water and the Bible

And so I’d like you to think about this question;  How does water, fit in with the bible?   When we read the story of creation, from the bible, it sounds like maybe the first thing that God created, was water.  It was certainly ONE of the first things that He created.  Listen to  Genesis 1, verses 1 & 2..

And then the next three verses talk about how God created light.  But listen to  verses 6, 7, and 8..

And so this “firmament”, this expanse, and this layer, is called “heaven”.   But don’t confuse this heaven, with the heaven where God dwells.  They’re not the same heaven.  Remember how the very first verse said that “In the beginning, God created the heavens (plural) and the earth.”   There’s more than just one area, that God calls “heaven”.

For example,  verses 14 thru 17,  refers to the part of the firmament where the stars are, as the “firmament of heaven”.   And then, God says in  verse 20;  “and let birds fly above the earth, in the open firmament, of the heavens.”

Do you remember when the apostle Paul told the story about how he was taken up to what he called, “the third heaven”?   That was in  2 Corinthians chapter 12.

And that reference agrees with  Revelation 2, verse 7,  which says;  “..To him that overcometh, will I give to eat of the tree of life, which is in the midst of the paradise of God.”   The heaven of God, is the paradise of God.  There’s no mistaking it, that’s what the bible says.

But what are the waters which are ABOVE the firmament?   God says that there are waters, which are ABOVE where the birds fly, and even above where the stars exist and shine.   What waters are these?   Haven’t you ever wondered about that?  I know I’ve wondered.

Revelation 22, verse 1  says;  (And this was the final vision, that was shown to the apostle John)  “And he showed me a pure river of water of life, clear as crystal, proceeding out of the throne of God and of the Lamb.”   Are these “the waters”, which are ABOVE  the created universe?  I believe that they are.

The Role of Water

Let’s take a look in the bible, and see what kind of a “roles”, that water serves.  For example, the bible says that there was quite a bit of water, in the land of Eden, where man first lived.

Genesis 2, verse 10  tells us;  “And a river went out of Eden, to water the garden, and from there it was parted, and became into four rivers.”  And we’re told in  verses 12 thru 14,  that the first is called Pishon, and the second is called Gihon, and the third is called Hiddekel, and the fourth is called the Euphrates.   And those rivers brought water to a vast area of lands.   And they gave life to those lands, and to the people, and the animals that lived in those lands.

We don’t have time to talk about all those waters, but I would like to focus on one of those examples;  The example of the waters of the great flood.  I mentioned how that water provides life..

And if we go to the sixth chapter of Genesis, we see how water provided life, for the family of Noah;   But at the same time, we see how it brought death, to the inhabitants of the earth;  And it provided what we surely could call, a “cleansing” of the earth.

We’re told in  Genesis 6:5 & 6;  “And GOD saw that the wickedness of man was great in the earth, and that every imagination of the thoughts of his heart, was only evil continually.  And it repented the LORD, (it made Him feel sorry) that He had made man on the earth, and it grieved Him at His heart.”  And so God “cleansed” the earth, of it’s wickedness, through the use of water!

Now that was the first time that the Lord used water, to cleanse something, but it wouldn’t be the last time.  As a matter of fact, the Lord uses that example of Noah, and the water that saved him and his family, to help us understand how the water of baptism, cleanses us, and saves us today.

We have an passage of scripture in  1 Peter 3,  that talks about the waters of the flood.  And in that passage, God speaks of that great majority of people in the days of Noah, “who were disobedient,  when once the longsuffering of God waited, in the days of Noah, while the ark was a preparing, wherein few, that is, eight souls, were saved by water.”

And God obviously had a reason, for phrasing it like that.  And God’s reason is, that He was using that phrase, “saved by water” to illustrate a point in regards to our salvation today.   God tells us about those eight souls who were “saved by water”,  in   1 Peter 3, verse 21,   when He says;  “The like figure, whereunto even baptism doth also now save us;  Not the putting away of the filth of the flesh, but, the answer of a good conscience toward God, by the resurrection of Jesus Christ.”

The example of Noah and his family, serves as “a like figure”, to help us understand how baptism now saves us!  Baptism is not a washing of the flesh, that verse says, it’s not a bath.  The act of baptism, is called “the answer of a good conscience toward God..”

God told Noah and his family, to “Get into that ark!”  And knowing, and believing, and trusting, that those words of God were faithful and true, Noah’s conscience told him that he had better be doing, exactly what the Lord told him to do.  And so Noah’s answer to God was, Yes Lord, I’m getting in that ark, and I’m taking my whole family, because I believe You, and I trust You!

Well that is precisely how the water of baptism saves us today.  Jesus said in  Mark 16:16;  “He who has believed AND has been baptized, shall be saved.”   And God’s Holy Spirit said, through the mouth of the apostle Peter, in  Acts 2, verse 38;  “Repent, AND let each one of you be baptized, by the authority of Jesus Christ, for the purpose of being forgiven of your sins..”   And when we read the words of  Acts 22:16,  which say;  “..Arise and be baptized, and wash away your sins..”  we see exactly how that water of baptism, “cleanses us”.  It doesn’t cleanse our flesh, but it’s when God cleanses our spirit!

Hebrews 9, verse 14  says;  “How much more shall the blood of Christ, who through the eternal Spirit offered Himself without spot to God, cleanse your conscience from dead works, to serve the living God?”   Baptism is “the answer of a good conscience toward God.”   And when we have one that, then not only our spirit becomes cleansed by god, and through the blood of Christ, but our conscience also becomes cleansed, because we KNOW in our minds, that we no longer bear the guilt of our sins, and thus our conscience is “clean”.

Knowing, and believing, and trusting, that those words of God are true, our conscience tells us that we had better do exactly what the Lord has told us to do.  And so our answer to God is, Yes, I will get into that water of baptism, and I will try my best to convince everyone I know, to do the same thing.

Just like getting into that ark..  getting into the water of baptism, is “the answer of a good conscience toward God..”  The one, is a “like figure” of the other.  The water didn’t literally save Noah and his family.   And the water doesn’t literally save us.    God saves us!  And he saves us when our conscience tells us to obey God’s instructions, and when we answer our conscience, with that obedience.   What could be simpler than that?

It’s so simple, even a child could understand.  Maybe that’s why Jesus said;  “Forbid not the children to come unto Me.”  (Mathew 9:14)  And maybe that’s why He said;  “Verily I say unto you, Except ye be converted, and become as little children, ye shall not enter into the kingdom of heaven.”  (Mathew 18:3)

Will you do it?  Will you become as a child, and be humble and trusting enough, to simply obey what the Lord has told us to do?