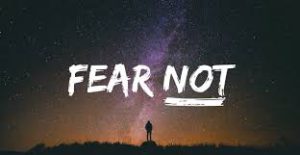 Fear in the Present Day World

I’m going to begin this morning by reading from an article titled,  “Jesus and the Problem of Fear in the Present Day World”

Jesus said, in  Luke 12 ,verse 32;  “Fear not, little flock; for it is your Father’s good pleasure to give you the kingdom”

Fear is in no sense a modern problem.  It’s as old as the history of man.  It’s an instinctive emotion, ranging from vague uneasiness, to shocks that may stop the heart, and paralyze the power to act.

But fear isn’t bad, or evil.  The capacity to fear, is given for the purpose of self-preservation.  It rolls the soldier into his foxhole when the artillery opens up, and the bombs begin to scream.  It keeps people from stepping in front of cars, trying to swim Niagara falls, or even from violating the rights of others.

Some things are rightfully, “to be feared”.  A man lives longer, if he’s afraid to drive too fast, to become a slave to drink, (or drugs) and to do wrong.  Fearing God, in the right sense, is the secret of a long and happy life.

But our problem with fear, is not to let it conquer and enslave us.  People often fear things needlessly, and from their own imaginations, create terrors that never exist.  It’s been said..  “Cowards die many times before their deaths.”  But even when fear has cause, a constant feeling of dread and insecurity, can gradually destroy one’s health, and can produce mental and spiritual depressions, that break down nerves, and fill our hospitals.  But, perhaps worst of all, fear of things that actually should be feared, may so overwhelm us, as to prevent our doing the thing we know to be right, and make moral and spiritual cowards of us all.

But God says, clear back in the old testament, in  Isaiah 41, verse 10;  “Do not fear!  For I am with you;  Do not anxiously look about you, for I am your God.  I will strengthen you;  Surely I will help you;  Surely I will uphold you with My righteous right hand.”

( Do you remember what the “right hand of God” means?  It means.. God’s power!   “I will uphold you with My righteous POWER!” )

In spite of the great progress of civilization we have not yet removed, the causes of fear.  War, through the centuries, has been a perpetual cause for fear.

And now I;m going to leave the article for several minutes here..

It wasn’t too long ago that everyone was afraid that we were going to go to war with North Korea.  But that doesn’t seem like that much of a threat now though, does it?   Now what’s everyone afraid of?  The Covid virus, and the economy, AND the fear of the gross immorality that is attacking our country!  Right?  There’s fear over the whole world right now, not because of the threat of nuclear war, but because of a virus, affection people’s health, and their livelihood, and the gross immorality of the world around us, and it’s trying to suck us all in, to be a part of it.

But a lot of people let fear get the best of them.  They have the habit of going overboard.   Whether it’s a war, or a virus, or whatever, we need to trust God.  Jesus tells us pretty plainly, in  Mathew 10:28;  “Do not fear those who kill the body (and we might add, do not fear, THAT WHICH can kill the body, or destroy your physical life) but are unable to kill the soul;  But rather fear Him who is able to destroy both soul and body in hell.”

Should we take the proper precautions, about those things that we need to have a healthy respect for in this life?  Like this virus?  Of course we should, but we shouldn’t  FEAR!   Should we FEAR the immorality that threatens our very decency?  No, we stand with God, against it!  Do we FEAR financial outcomes?  NO, we trust God to sustain us.  Is God not in charge?  Yes He is in charge, totally!   Once again, Jesus tells us in  Mathew 10:29;  “Are not two sparrows sold for a cent?  And yet not one of them will fall to the ground, apart from your Father.  But the very hairs of your head are all numbered.  (God knows an awful lot about us doesn’t He?)  So do not fear;  You are more valuable than many sparrows.”

We Can Know God !

What do we know about God?  Can we cast ALL our cares on Him?  Of course we can.  If we have cares, and worries, and fears, what do we do about those feelings?   Well, first of all, we understand, that  “in this world, you have tribulation.”   (John 16:33)   And we KNOW, that we can’t always do anything about the tribulations that come upon us.  WE don’t have the power or the ability, to always, do something about those things!   But God does, have both the power, and the ability, to do something!

So then what do we do?  Well, we humble ourselves, and we trust God.   Now this next verse isn’t given in direct connection to trusting in God in times of trouble;  But let’s listen to it anyhow..  1 Peter 5, verse 6  says;  “Therefore humble yourselves under the mighty hand of God, (there’s that power of God again)  that He may exalt you at the proper time.”  And  verse 7  says;  “..casting all your care upon Him, for He cares for you.”

Here’s what we know;  “..we know that all things work together for good to them that love God, to them who are the called according to his purpose.”   (Romans 8:28)   We know that, we trust that, and we depend upon that!   And so when tend to fear something, to worry, to be overly anxious, we just need to be humble, and say, yes, the world is more than I can handle sometimes.  But, it’s NEVER more than God can handle!

“Fear not,  those who (or that which) can kill the body, but are unable to kill the soul;  But rather, fear Him who is able to destroy both soul and body in hell.”

Both spiritual body, AND soul, can be destroyed in hell, by God, if we allow it to happen.  But there’s no need for that to happen is there?   Not if we humble ourselves, and trust in God.   God loves us, everyone of us!   “For God SO loved, the people of the world, that he sent His only begotten SON, that whosoever believes in HIM, should not perish, but have everlasting life!”   (John 3:16)

Why does the bible focus on belief so much?   It’s because to believe, is to TRUST!   To totally rely on God;  Trust Him,  one hundred and ten percent !   And when you TRUST, you DO, what the one you trust, tells you to do.  If someone refuses to DO what the Lord commands to be done, then they must not trust Him.

2 Thessalonians 1, verses 6 thru 12,  gives us this rather vivid account, of what you would call,  ‘falling into thee hands, of the living God”;  “For after all, it is only just,  (the KJV says, “it is a righteous thing)  (it’s not an unfair thing!  It’s not “cruel” of God)  for God to repay with affliction, those who afflict you, and to you who are troubled, rest with us, when the Lord Jesus shall be revealed from heaven, with his mighty angels;  In blazing fire, inflicting vengeance, on those who do not know God, and do not OBEY the gospel of our Lord Jesus;  Who shall be punished, with everlasting destruction, from the presence of the Lord, and from the glory of his power, when He shall come to be glorified in His saints, and to be admired in all them that believe (because our testimony among you was believed) in that day.”

“Wherefore, also we pray always for you, that our God would count you worthy of this calling, and fulfill all the good pleasure of his goodness, and the work of faith with power, so that the name of our Lord Jesus, will be glorified in you, and you in Him, according to the grace, of our God, and the Lord Jesus Christ.”

When I began, I told you that I was going to read from an article.  And the things that the article mentioned that people were so afraid of, were things like, a “cold war” with Russia, a third world war, and a struggling economy;  Not too much different from today.  But this article was written by Lloyd Cline Sears, who served as the first academic dean, and a professor of English, for Harding College, from 1934-1960.  He wrote the article in 1951.

But things really don’t change that much do they?  It might be different countries, that we fear today, and it might be slightly different economic conditions, and different health conditions, but the fear tends to be the same.  And the cure for fear, is still the same.

Proverbs 3, verse 5  tells us;  “Trust in the LORD with all thine heart; and lean not unto thine own understanding.”   Verse 6  says;  “In all thy ways, acknowledge Him, and He shall direct thy paths.”   Verses 7 & 8  say;  “Be not wise in thine own eyes: fear the LORD, and depart from evil.  It will be health to your flesh, And strength to your bones.”

So this article went on to say;  But what does Jesus have to say about the problem of fear?  His answer is simple and makes complete sense:   “Be not anxious . . . for your heavenly Father KNOWETH.”    “Fear not, little flock, for it is your Father’s good pleasure, to give you the kingdom.”

If God is our Father, what need is there of fear?  As God, He has all wisdom.  He knows the future, and understands our needs.  He has all power to do for us what should be done.  As a Father, He has the love to be concerned about his children.  “If ye then, being evil, know how to give good gifts unto your children, how much more shall your Father who is in heaven give good things to them that ask him.”   (Luke 11:13)   If it took the sacrifice of Jesus to give his “little flock” the kingdom, will He not, as the Apostle Paul says, “with him freely give us all things?”  (Romans 8:32)

The fact that God is our Father, once we realize the fullness of its meaning, removes all need of fear.  This applies to everything that might make us anxious, both great and small.  It includes wars, persecutions, world disasters, health concerns, economic concerns, all concerns, all fears.

Near the close of the article, the writer said;   We may fear many things in the world, but there is one thing, more terrible yet — the fear of doing wrong, of failing to meet the responsibilities we recognize in our own hearts.  The failure to live as God directs us to live.  For such failure leads to eternal death.

As Jesus knelt in the garden, his body shrank with fear, from the suffering ahead.  Great drops as of blood, fell from his brow.  But He had come to do his Father’s will.  From this, nothing could terrify him, not even the cross with its slow hours of pain, cutting like knives through every nerve of his body.  For NOT to DO, his Father’s will, was unthinkable, even in the face of the greatest physical suffering, one could imagine.