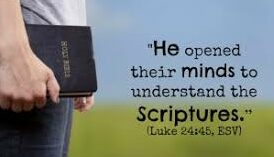 Then He opened their minds to understand the Scriptures

Let me read to you the words of  Luke 24, verse 45;   “Then He opened their minds to understand the Scriptures.”

In  Luke chapter 24,  we have the story of the resurrection of Jesus, and how He first appeared to Mary Magdalene at the tomb.  And how Mary and some of the other women ran back to Jerusalem, and told the apostles and the other disciples what had happened.  And we have the story of how two of the disciples were going down the road from Jerusalem, to the little village of Emma-oos’, about seven miles to the west of Jerusalem.   And we’re told in  verses 14 & 15;  “And they were talking with each other about all these things which had taken place.  And as they talked and reasoned, Jesus Himself came up and walked along with them.”

And  verse 16  says;  “But their eyes were prevented from recognizing Him.”   So then Jesus can open the eyes of the blind, and He can close the eyes of those who would otherwise see.

So Jesus walked along with the disciples, and He asked them in  verse 17;  “What are you discussing so intently as you walk along?  They stood still, with sadness on their faces.”  And let me read to you the next several verses..  Beginning in  verse 18..

“One of them, named Cleopas, asked Him;  Are You the only visitor to Jerusalem who does not know the things that have happened there in recent days?  What things?  He asked.  The events involving Jesus of Nazareth,  they answered. This man was a prophet, powerful in speech and action before God and all the people.  Our chief priests and rulers delivered Him up to the sentence of death, and they crucified Him.”

“But we had trusted that it had been He, who should have redeemed Israel:  And beside all this, to day is the third day since these things were done.  Furthermore, some of our women astounded us.  They were at the tomb early this morning, and not having found His body, they came declaring to have also seen a vision of angels, who say He is alive!  Some of those who were with us, went to the tomb and found it just exactly as the women also had said; But Him they did not see.”

“Then he said unto them;  O foolish ones, and slow of heart, to believe all that the prophets have spoken.  Was it not necessary, for the Christ to suffer these things, and to enter into His glory?   The disciples, as well as all the Jews, had the complete old testament scriptures, that actually prophesied extensively, about the Christ.   How that He should suffer, and die, and be raised on the third day.

As for the resurrection,  Psalm 16, verse 10  says;  “For You will not abandon my soul to Sheol, (and that’s the same as hades in the new testament)  nor will You allow Your Holy One, to see decay.”

And of course we’ve got  Psalm 22, verse 1;  “For the choirmaster. To the tune of “The Doe of the Dawn.” (some versions use the old Hebrew words there)  A Psalm of David;  My God, my God, why have You forsaken me?  Why are You so far from saving me, so far from my words of groaning?”   And  verse 7  says;  “All who see me mock me; they sneer and shake their heads:  He trusts in the LORD, let the LORD deliver him;  Let the LORD rescue him, since He delights in him.”

Verses 16  thru 18  say;  “For dogs have compassed me: the assembly of the wicked have enclosed me:  They pierced my hands and my feet.  I can count all my bones. They look, they stare at me;  They divide my garments among them and cast lots for my clothing.”

No doubt you’re remembering the description of the crucifixion, in  Mathew 27, verse 36;  “And they crucified Him, and parted His garments, casting lots:  That it might be fulfilled which was spoken by the prophet;  They parted My garments among them, and upon My vesture (My clothing) did they cast lots.”

Verse 36  says;  “And sitting down they watched him there.”  And  verse 39  says;  “And those passing by were hurling abuse at Him, wagging their heads.”   And the Jews had just witnessed all of this;  And they had those prophecies for a thousand years!  And then it took place right before their eyes!   But they didn’t understand.   How amazing!

But I suppose, it’s no more amazing than the fact that we’ve got all these scriptures right at our fingertips, and the vast majority still don’t understand.

But let me get back to  Luke 24, verses 25 & 26,  where Jesus had said to the two disciples on the road;  “O foolish men and slow of heart to believe in all that the prophets have spoken.  Was it not necessary, for the Christ to suffer these things and to enter into His glory?”

And  verse 27  says;  “Then beginning with Moses, and with all the prophets, He explained to them the things concerning Himself in all the Scriptures.”

Sometimes we just simply need to be led by the hand, one step at a time, so that we can understand, a bit more clearly.  And so that’s what Jesus was doing.

And then beginning in  verse 28  the bible says;  “And they approached the village where they were going, and He acted as though He were going farther.  But they pleaded with Him;  Stay with us, for it is nearly evening and the day is almost over.  So He went in to stay with them.  Now it came to pass, as He sat at the table with them, that He took bread, blessed and broke it, and gave it to them.  Then their eyes were opened, and they recognized Him;  And He vanished from their sight!”   Can you imagine?   What were they thinking now?

So then here’s what happened..   Verse 32  says;  “They said to one another;  Were not our hearts burning within us while He was speaking to us on the road, while He was explaining the Scriptures to us?”  They thought they felt something, but their eyes weren’t permitted to see.

“And they got up that very hour and returned to Jerusalem, and found gathered together the eleven and those who were with them, Saying; The Lord is risen indeed, and hath appeared to Simon!  Then the two told what had happened on the road, and how they had recognized Jesus in the breaking of the bread.  And as they were telling these things, He Himself stood in their midst, and said to them;  Peace unto you.”

“But they were terrified and frightened, and supposed they had seen a spirit!  (or a ghost)  And He said to them;  Why are you troubled?  And why do doubts arise in your hearts?  Behold My hands and My feet, that it is I Myself.  Handle Me and see;  For a spirit does not have flesh and bones as you see I have.”

“And having said this, He showed to them the hands and the feet.  While they were still in disbelief because of their joy and amazement, He asked them;  Do you have anything here to eat?  And they gave to Him part of a broiled fish.  And He took it and ate it before them.  (It was literally Him, right there with them)  And He said unto to them;  These are my words, which I spoke to you being still with you;  That all things having been written concerning Me, in the Law of Moses and the Prophets and the Psalms, it behooves to be fulfilled.”

And now the verse that we opened our study with,  verse 45;  “Then opened he their understanding, that they might understand the scriptures;  And He said to them;  Thus it has been written:  The Christ was to suffer, and to rise out from the dead, on the third day, and repentance, and forgiveness of sins, to be proclaimed in His name, to all nations, having begun from Jerusalem.  And you are witnesses of these things.”

And now I suppose, they finally understood the words of the scriptures;  The same words that they had had for a thousand years, but now Jesus opened their minds;  He opened their understanding, so they could comprehend.  And I suppose we need might be in need of the same thing today sometimes.

But wasn’t that a “special” occurrence?  That doesn’t happen today does it?   Wasn’t that kind of a miraculous thing that happened back then.  Wasn’t it so that those disciples could be equipped to testify to the resurrection of Christ, and to all the other things that the Holy Spirit was about to reveal to them?  I mean they had to possess the understanding, if they were going to pass that knowledge along to others right?  So then God doesn’t miraculously “open the minds” of people today, does He?

What do you think?  Is that how people come to understand the bible today?  Are we simply not capable of understanding the word of God, unless the Spirit of God, intervenes, and “opens our minds”?

Now I must admit, that one of the things that I pray for, almost every day (and it might be every day) is that God will grant me a better understanding of His word.  so that I can know His will, so that I can live according to His will.  and so that maybe, I can even pass along some of that understanding to others.  I mean, isn’t that exactly what one of the duties of every Christian is?  To spread the gospel to a dying world?  But how can we do it, if we ourselves don’t understand it?

You know, I try to talk to people about the way of salvation.  And I show people the very verses, that speak of faith, and confession, and repentance, and baptism.  And you know what a lot of people tell me?  They say that I simply don’t understand the word of God.  You’re saved by faith only, or “faith alone” as they like to call it.  And that “once saved, always saved”.   I’ll venture to say that it’s at least a hundred to one, the people who have been taught to believe that, as opposed to those who actually believe what the bible says.

And do you know why they say that I can’t understand the scriptures?  It’s because the Holy Spirit hasn’t opened my eyes, and my mind.  And they say;  You’re not being led by the Spirit, you’re still being led by the flesh.  And the mind set on the flesh cannot understand the things of the Spirit.  Those are all things that are found in the bible, right?  And I don’t understand that we’re not saved by works, and that any kind of obedience is simply a work, which is like filthy rags in God’s eyes.   Another scriptural reference.

And I’m going to leave it right there for tonight, and you can think about this, and next week, Lord willing, I’ll pick up right here where I’m leaving off.  And I’ll try to show from the scriptures, exactly HOW, we come to an understanding of God’s word, and His will.  And what part do we play in the whole thing, and what part does God play in it.