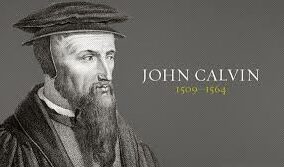 John Calvin (/ˈkælvɪn/;[1] French: Jean Calvin [ʒɑ̃ kalvɛ̃]; born Jehan Cauvin; 10 July 1509 – 27 May 1564) was a French theologian, pastor and reformer in Geneva during the Protestant Reformation. He was a principal figure in the development of the system of Christian theology later called Calvinism, aspects of which include the doctrines of predestination and of the absolute sovereignty of God in salvation of the human soul from death and eternal damnation, in which doctrines Calvin was influenced by and elaborated upon the Augustinian and other Christian traditions. Various Congregational, Reformed and Presbyterian churches, which look to Calvin as the chief expositor of their beliefs, have spread throughout the world.

Calvin was a tireless polemicist and apologetic writer who generated much controversy. He also exchanged cordial and supportive letters with many reformers, including Philipp Melanchthon and Heinrich Bullinger. In addition to his seminal Institutes of the Christian Religion, Calvin wrote commentaries on most books of the Bible, confessional documents, and various other theological treatises.

Calvin was originally trained as a humanist lawyer. He broke from the Roman Catholic Church around 1530. After religious tensions erupted in widespread deadly violence against Protestant Christians in France, Calvin fled to Basel, Switzerland, where in 1536 he published the first edition of the Institutes. In that same year, Calvin was recruited by Frenchman William Farel to join the Reformation in Geneva, where he regularly preached sermons throughout the week; but the governing council of the city resisted the implementation of their ideas, and both men were expelled. At the invitation of Martin Bucer, Calvin proceeded to Strasbourg, where he became the minister of a church of French refugees. He continued to support the reform movement in Geneva, and in 1541 he was invited back to lead the church of the city.

Following his return, Calvin introduced new forms of church government and liturgy, despite opposition from several powerful families in the city who tried to curb his authority. During this period, Michael Servetus, a Spaniard regarded by both Roman Catholics and Protestants as having a heretical view of the Trinity, arrived in Geneva. He was denounced by Calvin and burned at the stake for heresy by the city council. Following an influx of supportive refugees and new elections to the city council, Calvin’s opponents were forced out. Calvin spent his final years promoting the Reformation both in Geneva and throughout Europe.

Isn’t it strange, how people who at one time in history, claimed to be Christians, and who thought they were Christians, would be involved in the burning of other people at the stake!   That’s incredible to say the least.

So then, one of the things that John Calvin believed in, was the absolute sovereignty of God.  And, that’s good, because so do I, and I suppose that you do too.   Sovereignty means..  “supreme power and authority”.    In a secular sense, it means..  “the authority of a state to govern itself, or another state.”  That’s easy enough to understand.  And so it’s easy to see how that God, is totally sovereign, over everything!  God has total power and authority, to do exactly as He wishes, and as He has ordained!

And that last part, “as He has ordained” is an important part of God’s sovereignty, that a lot of people overlook.  God indeed has all power and authority, and has the CAPABILITY to do absolutely anything that He desires, but the fact is, that not anything, and not everything is POSSIBLE to occur.  Why not?  Why is not ANYTHING and EVERYTHING possible to occur, when God has all power and authority to MAKE anything at all occur?

For example;  In the physical realm of this earth, and the immediate sky which surrounds it, God has established the law of gravity.  You’ve heard it said;  what goes up, must come down”.  (except your age and your weight)  Well, that is because of God’s law of gravity, which God has ordained and established.  You can’t change the law of gravity, just because you may want to.  And that’s the way it is with God’s spiritual laws also

Now here’s a “law of nature” that applies to us physically, AND spiritually.   Hebrews 9, verse 27  says;  “And as it is appointed unto men once to die, and after this, the judgment.”   There’s actually two laws spoken of in that verse.  The first one is a law of physical nature, and the second one is a law of spiritual nature.   It is a physical law of nature, that we all will die someday.  Someday, maybe it will be the day that Christ returns, but someday, we WILL be separated from our physical bodies.

And just as sure as that will occur, it is also a spiritual law of God, that we WILL face the judgment.  2 Corinthians 5, verse 10  assures us of this fact.  “For we must ALL appear before the judgment seat of Christ, that each one may receive his due (his recompense)  for the things done in the body, whether good or bad.”   Even though we will be separated from our physical bodies, we will be receiving the recompense, for what we DID while in our physical bodies.  It’s a law of God, and it cannot be a changed!  Though many people would like it to be changed, they cannot change  that law!

But a lot of people think that what God has already ordained as “law”, CAN be changed by God, because He’s God!  Because He is sovereign! People think that because God has total power and authority, that He can change whatever He desires to, at any time.   I suppose they kind of view it like when God performed miracles, which went outside of His ordained “laws of physical nature”.  And we can’t deny, that God has indeed done that.  He has indeed acted beyond, and acted over and above, His pre-ordained laws which govern physical nature.  But I have never read anywhere in the bible, that God has ever intervened in, or changed, even one spiritual law, in any of the covenants, which He has ever made with man.

But let me give you an example of one of the spiritual laws of God, that a good many people think that God not only COULD change, but that they believe He DOES change, at His own discretion.  And what I’m referring to, is the manner in which God Himself has ordained that He would communicate with man, in what the bible calls, “these the last days”.

In  Hebrews 1, verses 1 & 2,  we read this;  “Long ago, at many times, and in many ways, God spoke to our fathers by the prophets.”  In other words, in times past, God choose to communicate with man in various and  different ways.  Right?  Sometimes in dreams, and sometimes in visions, and sometimes, in direct speech, and through the mouths of the prophets.  But now listen to  verse 2;  “But in these last days, (the days that we’re living in right now) He has spoken to us by His Son, (That’s past tense.  That means the speaking is all done.  It’s finished)  So God HAS spoken to us, in His Son, Jesus Christ..  “Whom He appointed heir of all things, and through whom He made the universe.”

And we have those words of Jesus Christ, right here in the bible.  And as Jesus had promised His apostles, in  John 14;26:  “But the Advocate, the Holy Spirit, whom the Father will send in My name, He will teach you all things, and will remind you of everything I have told you.”  And then similar words are recorded again in  John 16:13;  “However, when the Spirit of truth comes, He will guide you into all truth. For He will not speak on His own, but He will speak what He hears, and He will declare to you what is to come.”

And so we’ve got all these words;  The words of Jesus Himself from when He lived on this earth;  and then the words of the Holy Spirit, whom Jesus promised to send to His apostles, for the express purpose of guiding them into ALL truth.  Even the truths that Jesus Himself didn’t have the time to reveal with His own mouth.  And it seems totally obvious to me at least, that those words of the Holy Spirit, who wasn’t even speaking His own words, but He was speaking the words of God the Father;  It seems obvious that those words are equated by God, as being the words of His Son, Jesus Christ.  Because as the scripture says;  “In these the last days, (He) has spoken to us in His Son!”

Now the comparison made, between  verse 1,  how that in times past, God spoke to men in various and sundry ways, and  verse 2, where in these days, God has spoken to us in Hs Son,  seems to me to be perfectly clear.  The meaning of course being, that God doesn’t communicate with us in all those other various manners any more.  It seems to be perfectly clear, that in THES days, God has ordained ONE manner in which He has chosen to speak to us, that being through His Son Jesus Christ, and the Holy Spirit who Jesus sent.  By the way, Jesus Christ the Son, and the Holy Spirit, are virtually one and the same, as I’ve proven through the scriptures, time and time again here.

But that’s something that many, many people think that God has changed.  Are you familiar with the stories that have gone around, about Muslims, receiving visions, and visitations form Jesus, telling them to become Christians?   I’ve read about it recently, and there’s actually a lot of people that believe this.  I don’t know what’s supposed to be so special about Muslims, but they firmly believe that Muslims have received special visions and messages from Christ.  And I suppose that someone could say;  You see, God is speaking to them though His Son”.  But it seems pretty peculiar to me.

Would that make God a “respecter of persons” ?   Remember what Peter said when he saw that God had accepted the Gentiles into the kingdom, by offering them the same salvation that the Jews had first been offered?   The bible says in  Acts 10:34-35;  “And Peter, having opened the mouth, said;  “Of a truth I understand, that God is no respecter of persons,  (other versions say, God is not one to show partiality)  But in every nation, he that feareth him, and worketh righteousness, is accepted with him.”

And so Yes, the Muslims are just as equally accepted as everyone else.  But that doesn’t mean that God is going to override His ordained method of communication with man, and treat those Muslims differently from everyone else!   One of the things that surprised, and shocked Peter, was that God had treated the Gentile household of Cornelius, in exactly the same manner as He had treated the Jews!   And so Peter said in  Acts 10, verse 47;  “Can anyone withhold the water to baptize these people?  They who have received the Holy Spirit, just as we have!”   God is no respecter of persons.  When it comes to salvation, God treats everyone the same.

I’ll have to continue this study next week, Lord willing, and I’ll get back to John Calvin, and his beliefs, and how even though Calvin believed in the total sovereignty of God, we’ll see how he actually tried to apply that fact, in ways that contradict the teachings of the bible.