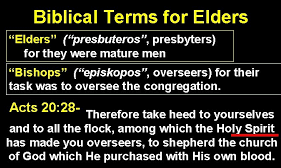 In the New Testament scriptures, the words Bishop and Overseer, mean the same thing.  They’re synonyms.   The original Greek word that they come from, is the word “Episkopos”.   That’s where the word “Episcopal” comes from, as in the “Episcopal church”.  And the basic meaning of the word “episkopos” is..  “a superintendent, or an overseer”.   Someone who has been put in charge of something.  And here’s a little more extensive definition..  “an overseer, a supervisor, or a ruler;  Especially used with reference to the supervising function, exercised by an elder or presbyter of a church or congregation.”

Therefore, in the New Testament, the words “Bishop” and “Overseer” most commonly refer to the persons who have been given the supervising role, of an elder or presbyter.  But then, what is an “elder” or, a “presbyter”?   Well again, an elder or a presbyter, refer to the same person, they mean the same thing;  Those words are synonyms.  And those words come from the Greek word “pres-boo’-ter-os”, more commonly pronounced..  “presbuter’os”.   And the word literally means..  “a mature man having seasoned judgment (and experience);  Thus, an elder.”

So when you put all of these words together, we see that an “elder” (the word that we in the church are most familiar with) or a “presbyter”, as some people call it, refers to an older man, with experience and sound judgment, who has been selected (along with at least one or more other such men) to have the oversight, and the supervisory role, in a congregation of Christians.

The words “presbyter” and “elder” refer to the age, experience, and subsequently, the sound judgment of the man placed in that position;  And the words “Bishop” and “Overseer” refer to the actual duty performed by those men.;  They oversee, and care for, a congregation of Christians.  That’s not too difficult to understand, is it?  I don’t think so.

Listen to these verses of scripture, which tie together the words “episkopos” and “presbuter’os”    The apostle Paul wrote these instructions to Titus, in  Titus 1, verses 5 & 6;   “This is why I left you in Crete, so that you might put into order, what remained, and appoint elders (“presbuter’os”) in every town (or city), as I directed you.”   And then in  verse 7  he wrote;  “For, an overseer, (an “episkopos”) as God’s steward, must be above reproach..”   The KJV says;  “For a bishop must be blameless..”   Of course that doesn’t mean that an overseer must be 100% sinless, because no one is sinless.  But an overseer must be of a high degree of faithfulness.  Not prone to sinning.  But you can easily see, how the word “elder” (presbyter) and the word “overseer” (Bishop) are being used interchangeably.   And that’s because they refer to the same person.  An elder IS an overseer.  And a presbyter IS a Bishop.  They’re simply different descriptions, for the same man, and for the same position.

A Shepherd and (a Pastor)

Now there’s one more word that’s used in the bible in regards to the duty and role of an elder, and that word is “shepherd”.   The apostle Paul wrote these words to the elders at Ephesus,  in  Acts 20, verse 28;  “Take heed therefore unto yourselves, and to all the flock, over  which the Holy Spirit hath made you overseers, to shepherd the church of God, which he hath purchased with his own blood.”

So you can see that the word “shepherd” is used in this verse to describe the role of the overseers.  The Overseer has the role of “shepherding the sheep” so to speak.  And in the KJ Version, instead of using the word  “shepherd”, it uses the phrase “feed the church of God”.   Think about the responsibilities of a literal shepherd, taking care of a herd of sheep.   That shepherd would be responsible for leading the sheep to where they can find proper food and water.  And so he “feeds” the sheep.  And he’s responsible for providing safety for the sheep.  He guards them and protects them.  I don’t know how many of you have actually spent much time around sheep, (My wife and I have actually spent a considerable amount of time around sheep)  But sheep aren’t very good at providing anything for themselves.  It’s pretty much all got to be provided for them.

And you know what?  When it comes to our spiritual survival, you and I aren’t much different from those sheep.  God has created us, to NEED Him!   We absolutely cannot survive spiritually, without God.  The way of man is simply not in himself, spiritually speaking.  (Jeremiah 10:23)

And all of this is exactly why, God says what he says, in the  23rd Psalm.   I know you know it, but let’s listen to it again;  Psalm 23,  “A Psalm of David;  The LORD is my shepherd; I shall not want. (He supplies everything)  He makes me lie down in green pastures. He leads me beside still waters.  (He gives us the “bread of life”, and He gives us “living water”)  He restores my soul.  He leads me in paths of righteousness for his name’s sake.”

“For you were like sheep going astray, but now you have returned, to the Shepherd and Overseer of your souls.”   (1 Peter 2:25)

Now back to  Psalm 23;  “Yea, though I walk through the valley of the shadow of death, I will fear no evil, for You are with me;  Your rod and Your staff, they comfort me.  You prepare a table before me in the presence of my enemies;  You anoint my head with oil;  My cup overflows.  Surely goodness and mercy shall follow me all the days of my life, and I shall dwell in the house of the LORD forever.”

What more could the Lord do for us, as the “shepherd of our souls”   He’s done it all!

And so what does a “shepherd” of the congregation do?   Well, they make sure that the congregation is well fed, with the pure word of God.  And they protect the congregation, against false teaching.  And I’m sure they should also see to it that other needs of the members are met;  Whether those needs be spiritual, or material, or emotional or whatever they may be.

Now, in  Acts 20:28,  where the “overseers” were told to “shepherd the church of God”, that word “shepherd” is used as a verb.  But there is one verse of scripture, but only one, where the word “shepherd” is used as a noun, to refer to a man within the congregation.   That verse is  Ephesians 4, verse 11.  And this is also the only verse in the new testament, where in some English versions, you’ll find the word “pastor” used, instead of the word “shepherd”.   And the reason for that, is because “pastor”, is the Latin word, for “shepherd”.  They mean the very same thing.  Shepherd is the English word, and pastor is the Latin word.  And many protestant denominations have adopted that Latin word “pastor”, for whatever reason, I don’t know.  Possibly, since these denominations originally broke away for Catholicism, and since Catholicism uses so many Latin words, maybe that’s the reason why the protestant denominations like to use the word “pastor”.  But that’s also the reason why you won’t usually hear a member of the church of Christ use the word “pastor”, because we don’t typically use Latin words.  We use English words in this country.   And so we use word “shepherd”, because “shepherd” is the English translation for the original Greek word in the new testament.   But at least now you know where that word “pastor” came from.

But let me read  Ephesians 4, verses 11 thru 13,  so you can see how the word “shepherd” is used there.  This passage is going to be referring to four different classifications of men, who all had been given some sort of miraculous ability, by Jesus Christ, or by His Holy Spirit.   So here’s what the bible says in  Ephesians 4: 11 thru 13..

Now, since  Acts 20:28  says that an Overseer (or elder) is to “shepherd” the congregation, (meaning to feed, and thus to teach) and since  Ephesians 4:11  refers to some men in the congregation as “Shepherds and Teachers”, it would seem only logical that  Ephesians 4:11  is referring to the position of an overseer, or an elder.  And if that be the case, then  Ephesians 4, verse 11 would be saying that God gave some the ability to be apostles, and some to be prophets, and some to be evangelists, and some to be overseers;  To equip the saints for the work of ministry, for the building up of the body of Christ..”

And that would agree very well with the words of  1 Corinthians 12:28,  where Paul wrote;  “And God has appointed in the assembly, first apostles, second prophets, third teachers..”    Now it sure seems like the word “teachers” in this verse, would correlate with the words “shepherds and teachers” spoken of in  Ephesians 4:11.   And both of those verses are speaking of God Himself appointing these men to these positions, through miraculously equipping them to fulfill those positions.

And so in the very beginning years of the kingdom, in the infancy of the church, Jesus Christ gave miraculous abilities to some men, so they could serve as apostles;  Namely, the twelve apostles, and also the apostle Paul.  Jesus specifically promised the twelve that the Holy Spirit would come upon them, giving them both miraculous knowledge, and miraculous abilities.

And Jesus also gave to some, the ability to be prophets;  Again, clearly a prophet possessed miraculous ability, otherwise, how could he prophecy?  And then Jesus gave to some to be evangelists;  (An evangelist was typically someone who travelled around from place to place, preaching the gospel.  as opposed to a “located preacher”)  And if the apostles had to be given their knowledge of what to say, and of what to teach, miraculously, then it would be foolish to think that evangelists in that same time period, didn’t also need to be given miraculous knowledge, of what to preach.

And then the last category is “shepherds and teachers”.  Jesus gave to some, the ability to be shepherds and teachers, within the first century congregations.  And again, in the beginning years, in the infancy of the kingdom, when the word of God was first being revealed, before they had the written word at their fingertips, how on earth could anyone properly “shepherd and teach” a congregation of Christians, without first being equipped by God, with the knowledge of what to teach and of how to “shepherd”?   Quite frankly, it would have been absolutely impossible to accomplish such a task, without God’s hand in the matter.

Now like I said earlier, this verse is the only verse in the new testament, that refers directly to any men in the church, as “shepherds”.   The word shepherd is used another seventeen times;  Eighteen times total.   However, ten times, the word is used in reference to literal shepherds, out in the fields.  And the remaining seven times that the word “shepherd” is used, it is used in reference to Jesus Christ, “the Good Shepherd”.

And we’re reminded of the verse that I already read, from  1 Peter 2:25;  “For you were straying like sheep, but have now returned, to the Shepherd and Overseer of your souls.”

So hopefully that gives you a real good understanding of exactly what an overseer, and an elder, and a presbyter, and a shepherd is, within a congregation of the body of Christ.