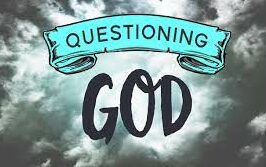 Are You ever Tempted to Question God’s Word ?

According to  1 John 2, verse 16,  temptations come in 3 “flavors”, you might say.  The first “flavor” that we’re tempted by, is “the lust of the flesh”.  And that’s a very popular “flavor”.  Wasn’t it back in the seventies or eighties, that the phrase, “if it feels good, do it” was popular?  Most everyone wants to feel good, and so we want to do the things that make us feel good.  And so that not only became a very popular saying, but it became a very popular “principle” by which a lot of people lived.  A “lifestyle” I guess you would say.  If it feels good, just go ahead and do it.  I’m simply going to please myself.  And of course that attitude, that mindset, is the epitome, of “the lust of the flesh.

The second “flavor”, that we’re tempted by, is “the lust of the eyes”.   And that’s pretty much akin, to “the lust of the flesh”.  But maybe it’s a little easier to succumb to, since all you’ve got to do is “look”, and not “do”.  But really, it’s not so much a matter of what the eyes are seeing, as it is what the heart and mind is feeling and thinking.

And the third “flavor” that temptation comes in, is “the boastful pride of life”.  And that really has nothing to do with what we do, or with what we see, but rather, it’s all about what we feel inside.  “Boastful pride” is a feeling, and an attitude, and a mindset, an arrogance, and maybe a few other words that you could think of.  But what it boils down to, is that it’s sinful.

All three of those means of temptation might indeed be “flavorful”, but they’re all sinful, and they’re all deadly.

I just recently read a little article about how Eve was tempted in the garden of Eden.  And the writer was making the point, that when Eve was tempted, she wasn’t tempted to do anything like to murder, or to steal, or to lie, or to behave in any other sinful way.  But instead, she was simply tempted to question, God’s word.  Have you ever questioned God’s word?  Have you ever been “tempted” to question God’s word?

Listen to  Genesis 3, verses 1 & 2;  “Now the serpent (the serpent is of course satan, the devil.  And the devil is the very “spirit” of disobedience to God)  And I didn’t just dream that up.  That’s what God’s word clearly tells us, in  Ephesians 2, verses 1 & 2.  Listen if you would;  Ephesians 2:1 & 2  says;  “And you were dead in your trespasses and sins, in which you formerly walked, according to the course of this world, (now listen to this part) according to the prince, (that means the “ruler”) of the power of the air, (Who is, the “prince” (or the “ruler”) of the power of the air?  The “air” simply refers to this world, this physical realm..  this world?   And so obviously, the “prince” the “ruler” is satan, the devil)  “..according to the prince, of the power of the air, of the SPIRIT that is now working, in the SONS of disobedience.”  All those who disobey, are under the influence, of the “spirit” of disobedience.  Satan is the “father” of disobedience (and the father of lies..  John 8:44)  And so those who harbor and exhibit, that same “spirit” of satan, are naturally referred to as the “sons of disobedience”.   The sons of satan.

When we disobey the word of God, and when we stand in “opposition” to the word of God, it’s because we have “questioned” the veracity, or the truthfulness, of the word of God.  And we’re all guilty of that, at times.  And at times, we may not even KNOW that we’re doing it.

Let’s use the apostle Peter as an example.  I’m going to turn to  Mathew 16, and read a few verses, beginning with  verse 13;   And Jesus is going to teach some “truths” here in these verses.   So then here’s what the scriptures say, beginning in  Mathew 16, verse 13  and following..

“When Jesus came to the region of Caesarea Philippi, He questioned His disciples, saying;  Who do people say the Son of Man is?  And they said;  Some indeed say, John the Baptist, and others, Elijah, and others, Jeremiah or one of the prophets.  He said to them;  But who do you say that I am?”  (And that’s the question that everyone has always had to ask themselves.  Who do YOU say that Jesus is?)

Back to our text..  “And Simon Peter answering said;  You are the Christ, the Son of the living God!”  Exclamation point!  “Jesus replied; Blessed are you, Simon son of Jonah.  For this was not revealed to you by flesh and blood, but by My Father in heaven.  And I also say to you, that you are Peter, and on this rock (upon this bedrock truth, that Jesus is the Christ, the Son of the living God) I will build My church, (My called out assembly of the saved)  and the gates of Hades not will prevail against it!”  (some versions say..  “will not prevent it”)

“The gates of hades” refers to the “confines of hades”.  Or in other words, the “confines” of physical death.  What does one “accomplish”, after their physical death?  Absolutely nothing, is accomplished, or is done, by anyone, after their physical death.  And so the Jews thought, that if they killed Jesus, He wouldn’t be able to “accomplish anything.  They thought that this “movement” that He started, would simply fizzle out and also die.  THEY thought, that they could “prevent” Jesus from becoming the KING, over His kingdom!  But they were wrong!

Well, Jesus was basically saying..  Though they slay Me, yet you can still trust ME!   “I will build My church, and the gates of Hades NOT will prevail against it!”

Then Jesus said to Peter, in  Mathew 16, verse 19;  “I will give you the keys of the kingdom of the heavens;  And whatever you bind on earth, shall have been bound in heaven, and whatever you loose on earth, shall have been loosed in the heavens.”  And  Verses 20 & 21  say;  “Then He strictly charged the disciples, to tell no one that he was the Christ.  From that time, Jesus began to show his disciples, that He must go to Jerusalem, and suffer many things from the elders and chief priests and scribes, and be killed, and on the third day be raised.”

But that wasn’t something that His disciples wanted to hear.  And so this brings us to the example of “questioning” and of “standing in opposition”, to the word of the Lord.  Remember, that’s what brought us to this point.  The scriptures says that at this point, Jesus began teaching His disciples more truths, about the things that must be.  But now listen to Peter’s reaction to these truths..

Verse 22;  “And Peter took Him aside, and began to rebuke Him, saying;  Far be it from you, Lord! This shall never happen to you!”  Now the word “rebuke” here, most likely doesn’t mean what you typically think of as “rebuking”.  Can you imagine rebuking the man you’ve just confessed to be the Christ, the Son of the living God?  The fact is, the use of the word “rebuke” here, has a softer and more honorable meaning.  A word study says that it means..  “to place due weight/honor upon”, and to stand as “a warning to prevent something from going wrong.”

And thus the words.. “Far be it from you, Lord!  This shall never happen to you!”   So you can almost “hear” the concern, and the honor, in the words of Peter.   But be it as it may,, no matter how “good” the intentions were, Peter was openly opposing the clear words of God!  He was standing in opposition to what Jesus said must occur.

And so how did Jesus respond to this “opposition”?   Well, here’s what He said..  Verse 23;  “..Get behind Me, Satan!  You are a stumbling block to Me.  (You’re a hindrance;  You’re in opposition)  For you do not have in mind the things of God, but the things of men.”

Did Jesus call Peter “satan”?  Not exactly.  Jesus called Peter’s attitude, “satan”.  He called the very “spirit” of Peter’s words, “satan”.  The words which were in direct opposition to Jesus’ own words, and to God’s will.   Peter was opposing God, without even realizing he was doing it.  Is it possible that we, could sometimes do the same thing?

Let me go back to  Genesis 3:1 & 2;  “Now the spirit of disobedience to God, was more crafty than any beast of the field that the LORD God had made, and said to the woman;  Did God really say, ‘You must not eat from any tree in the garden? ”

So Eve’s having an “internal struggle” here.  She’s being tempted to question God’s word.  And it wasn’t because God’s word was unclear.  It was perfectly clear.   Genesis 2:16 and 17  says;  “The LORD God commanded the man, saying;  “From any tree of the garden you may eat freely;  BUT, from the tree of the knowledge of good and evil, you shall not eat;  For in the day that you eat from it, you will surely die.”

Sounds pretty clear to me.  And we have no indication that what God so clearly commanded the man, Adam, was passed on word for word, to the woman, to Eve.  But that’s what people do even to this day.  They take a perfectly clear statement from God, and they begin to question it, and try to MAKE it unclear.

And of course we could use any command of God as an example.  Because it seems that man is not too particular;  He’ll question anything and everything that God has said.

And it’s really no different from  Eve, questioning God’s command, concerning what she could and couldn’t eat.  Did God say that I can’t eat of ANY tree of the garden?  NO, God said that you can eat FREELY of any tree in the garden, EXCEPT for the tree of the knowledge of good and evil.  That’s what God said!  There’s no need to question it.

Remember those three “flavors” of temptation, that our fleshly appetite sometimes can’t resist?  Which one did Eve seem to have the appetite for?   The scripture answer that question, in  Genesis 3, verse 6;  “When the woman saw that the tree was good for food, (the lust of the flesh) and that it was a delight to the eyes, (the lust of the eyes) and that the tree was desirable to make one wise, (the boastful pride of life) she took from its fruit and ate;  And she gave also to her husband with her, and he ate.”

So it seem that Eve liked all three flavors.  And aren’t we pretty much just like Eve?  Isn’t that the fleshly nature of all of us?

May we all have the dedication, to never question God’s word. Even when our appetite tempts us.