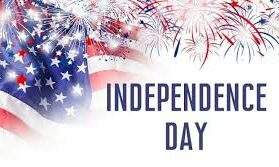 Tomorrow, as you all know, is the 4th of July, the day that we celebrate as “Independence Day”.   It’s typically a day for picnics, and barbecues, and cookouts.  And for a lot of people, (maybe most people) it’s a day off work!  Now that’s the way to start a work-week, with a day off!

It’s a day to relax, and a day to have fun, and a day to just enjoy summer.  It’s a national holiday!  A day to enjoy all the freedoms we have, to do all these things that we enjoy.  But I wonder how many people stop and think about the fact, that “freedom” is exactly what the day is all about?  Sure, it’s a day to go out and enjoy summer.  Or a day to stay home and enjoy summer.  But the reason that we have this particular holiday, isn’t JUST because it’s summer.  And it isn’t just because we need a day off work.  (even though we might feel like we need a day off work)  (But we might feel that way every week)

But as it’s name clearly states..  It’s about “independence”.   If you look up the meaning of “Independence Day”, on-line, here’s what you might find..  “Independence Day, also called Fourth of July or July 4th, in the United States, the annual celebration of nationhood. It commemorates the passage of the Declaration of Independence by the Continental Congress on July 4, 1776.”

The United States of America, was founded, for the very purpose of acquiring freedom.  But not only political freedom, but economic freedom as well.  And don’t forget the importance of religious freedom.

How many of you truly appreciate your freedoms?

Most of us take our freedom very seriously.  Especially with what seems to be, a very determined governmental agenda, of taking many freedoms away from us.  And so the idea of “freedom”, is a very important subject, isn’t it?

But now let me ask you something;  While I’ve been talking about “independence Day” and freedom, have any of you thought to yourself about making a spiritual application, to the idea of freedom?  And I’m not talking about our so called “freedom of religion”, where you’re free to choose whatever religion you choose to believe in and follow.

The spiritual application that I’m thinking about, is the freedom that we have as the result of one very specific religion.  And of course that one religion is what we call “Christianity”.  It’s the one religion of God;  The religion of the bible.

And what is it about this one religion, that provides us with the opportunity to be freed from the grasp of sin?  It’s something that only this one religion has 100% of.  Other religions try to “steal” some of what “bible Christianity” has, but they seem to not even want, too much of it.   So what is it that “bible Christianity” has complete possession of?  It’s truth..  God’s truth.

It’s God’s truth, that can set us free from sin.  Not free from ever sinning;  But free from the consequences of sinning.

“So Jesus said to the Jews who had believed him, “If you abide in my word, you are truly my disciples,  and you will know the truth, and the truth will set you free.”  They answered him, “We are offspring of Abraham and have never been enslaved to anyone. How is it that you say, ‘You will become free’?”   Jesus answered them, “Truly, truly, I say to you, everyone who practices sin is a slaveb to sin.  The slave does not remain in the house forever; the son remains forever.  So if the Son sets you free, you will be free indeed.”

Now  verses 37 thru 43;  “ I know that you are offspring of Abraham; yet you seek to kill Me because my word finds no place in you.  I speak of what I have seen with my Father, and you do what you have heard from your father.  They answered him, “Abraham is our father.” Jesus said to them, “If you were Abraham’s children, you would be doing the works Abraham did.  But now you seek to kill Me, a man who has told you the truth that I heard from God. This is not what Abraham did.  You are doing the works of your father.” Therefore they said to Him, “We have not been born of sexual immorality. We have one Father, God.  Jesus said to them, “If God were your Father, you would love Me, for I came from God and I am here. I came not of My own accord, but he sent Me.”

Some people just don’t like the truth do they?  But the truth, is what freedom is all about.  “You shall know the truth, and the truth shall set you free”.

But does just KNOWING the truth, set you free from the consequences of sin?  No, it’s not quite that easy is it?  Knowing the truth is just the beginning isn’t it?   Those words, “you shall know the truth, and the truth shall set you free”, is a saying, that speaks of the MEANS by which we are freed from sin.  God has given us His truth, as the means by which to be forgiven.

Let’s go back to  verse 31  for a second..   That verse begins with these words..  “If you ABIDE in my word, you are truly my disciples..”   So you’ve got to do more than just NOW the words of truth;  You’ve got to ABIDE in them.  And then, after abiding in the truth,  THEN the saying is fulfilled, that..  “you will know the truth, and the truth will set you free.”

And let’s look again at  verse 34,  where Jesus says..  “Truly, truly, I say to you, everyone who PRACTICES sin is a slaveb to sin.”  In other words, you’ve got to DO what is sinful, THEN you’re a slave to sin.  Well, the very same thing holds true for the truth.  You’ve got to practice the truth;  You’ve got to DO what the truth tells us to do, and THEN the truth will set you free from the slavery of sin.

We’re told in  Hebrews 5, verse 9,  that Jesus “has become the source of salvation to all who obey Him.”  In other words;  If we obey Jesus, then He’ll set us free, and if “the Son sets you free, you will be free indeed.”

And listen again to  John 8, verse 39, speaking of doing and obeying..  Jesus said;  “If you were Abraham’s children, you would be doing the works Abraham did.”

Do you remember when James wrote about Abraham, in  James 2:21 thru 24..  “Was not Abraham our father justified by works, (another word for “works” there, would be obedience)  “Was not Abraham our father justified by works of obedience, when he offered up his son Isaac on the altar?”  God commanded him to offer Isaac, in  Genesis 22, verse 2;  “Take your son, (God commanded) your only son, whom you love—Isaac—and go to the region of Moriah.  Sacrifice him there as a burnt offering, on a mountain which I will show you.”

“You see that faith was working with his works, and as a result of the works, faith was perfected;  And the Scripture was fulfilled that says, “Abraham believed God, and it was reckoned to him as righteousness,”  and he was called a friend of God.”

The saying, in scripture, was fulfilled;  “Abraham believed God, and it was reckoned to him as righteousness,”   That’s a lot like the saying..  “And you shall know the truth, and the truth shall make you free.”  Once your faith starts working with your works (with your obedience to God) then that saying is also fulfilled, and you become freed from the consequences of your sins.

Jesus told His apostles, in  John 16, verse 13;  “When the Spirit of truth comes, He will guide you into all the truth;  For He will not speak on His own authority, but whatever He hears, He will speak, and He will declare to you the things that are to come.”   And “what was to come” was freedom from the “hold” that sin had on everyone.

1 Corinthians 15:55 thru 57  says;  “O death, where is your victory? O death, where is your sting?  The sting of death is sin, and the power of sin is the law;  But thanks be to God, who gives us the victory through our Lord Jesus Christ.”   (When the son sets you free, you will be free indeed)

2 Timothy 2:15  encourages us to.. “Be diligent to present yourself approved to God as a workman who does not need to be ashamed, accurately handling the word of truth.”

The apostle Paul encouraged the elders in Ephesus, with these words, in  Acts 20, verse 32;  “And now I commend you to God, and to the WORD of his grace, (the Word of truth) which is able to build you up and to give you the inheritance among all those who are sanctified.”

How much do you appreciate, and treasure, the Word of God?

Do we appreciate what the Lord has done.   James 1:18  says;  “In the exercise of His will, He brought us forth by the word of truth, so that we would be a kind of first fruits among His creatures.”

“But God demonstrates His own love toward us, in that while we were still sinners, Christ died for us.”   (Romans 5, verse 8)

And  verse 9  says;  “Since, therefore, we have now been justified by his blood, (that means we’ve been set free) much more shall we be saved by Him (By Jesus) from the wrath of God.”

1 Peter 1, verses 18 & 19  tells us this truth;  “Knowing that you were not redeemed with perishable things, like silver or gold, from your futile way of life inherited from your forefathers, but with the precious blood of Christ, as of a lamb without blemish, and without spot.”

We could think of several days, as “Independence Day”.  There’s the day that Jesus shed His blood, because “without the shedding of blood, there is no remission of sin.”  (Hebrews 9:22)   And there’s the day Jesus was resurrected, because as the scripture says;  “..if Christ has not been raised, your faith is futile and you are still in your sins.”  (1 Corinthians 15, verse 17)

So then, Happy Independence Day, to all of us who are enjoying our “freedom” in Christ.