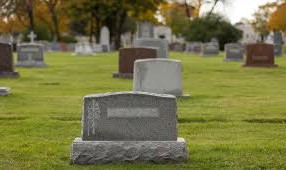 What Does the Bible Say About Burial and Cremation ?

Actually, the bible gives very few specifics about burial and it says nothing about what we know as cremation.  So to gain an understanding of how God feels about these subjects, we need to look at the few examples that we are given, and also look to what God tells us about the physical body and about death.  We also need to consider whether God has given His approval of certain practices, or has He shown disapproval for any particular practices.

First we should look at what God has said about the human body.  God tells us in  Genesis 2:7,   “God formed man from the dust of the ground, and breathed into his nostrils the breath of life.”   And then we are told in  Ecclesistes 12:7,   “Then the dust will return to the earth as it was, and the spirit will return to God who gave it.”

When the bible says that God “formed man of the dust of the ground”, it simply means that man’s body is composed of the same elements that are found in the earth.  There are only so many elements that all physical things are made up of.  Our bodies came from the earth, and they will return to the earth.  After Cain killed his brother Abel, God said in  Gen 4:10,   “The voice of your brother’s blood is crying to Me from the ground.”

The word “buried” is used approximately 95 times in the Old Testament, but only 9 times in the New Testament, and two of those times it was used in a figurative sense comparing baptism to a “burial” in water.

The word “sepulcher, or tomb”, is used 8 more times as the place of burial, and “under the oak” is used one more time, and “in the grave” is used once.  The remaining times that the word “buried” is used, only the name of the city is given where the burial took place. 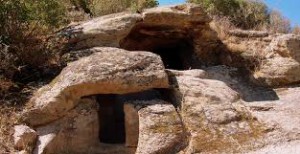 As we’ve already seen, the word sepulcher, or tomb, is used describing a place of burial.  A sepulchre was most often a cave in the rocks or in a hill, where a body would be safe from animals who might be attracted.  And the opening was sealed with rock.  The word sepulcher is used 31 times in the Old Testament, and 39 times in the New Testament.  We’re told that Jesus raised His friend Lazarus from a tomb of this kind, in  John 11:38.  Also Jesus Himself was also buried in a tomb of this kind,   John 20:1.

You can see that care was taken by depositing a body in a safe place, and that the body was treated with respect.  Concerning the body of Jesus, we’re told in  John 19:40-41,  “And so they took the body of Jesus, and bound it in linen wrappings with the spices, as was the custom of the Jews.  Now in the place where He was crucified, there was a garden; and in the garden a new tomb, in which no one had been laid.  Therefore, on account of the Jewish day of preparation  (this was the preparation for the Passover),  because the tomb was nearby, they laid Jesus there.”

So it was the “custom” of the people and of the times, to treat a body with care and with respect, and God allowed the body of His Son, to be treated in exactly this manner.  Therefore we know that this is only proper and right before God.  I believe that any other treatment of a human body would have to be viewed as improper and displeasing to God.

A Coffin or A Casket

There’s a passage of scripture in  Luke 7:11-15,  which talks about a young boy who had died, and how Jesus brought him back to life.  Here’s the passage..

“And it came about soon afterwards, that He went to a city called Nain, and his disciples were going along with Him, accompanied by a great multitude.  Now as He approached the gate of the city, behold a dead man was being carried out, the only son of his mother, and she was a widow; and a sizable crowd from the city was with her.  And when the Lord saw her, He had compassion for her, and said to her; Do not weep.  And He came up and touched the coffin, and the bearers came to a halt, and He said;  Young man, I say to you, Arise!  And the dead man sat up and began to speak.  And Jesus gave Him back to his mother.”

Here is an example of what we would call, “a funeral procession”.  Men carrying the dead body in a coffin;  the young man’s mother and a crowd of people accompanying them.  They were already outside the city gate when Jesus met them.  It was obviously outside the city where the burial place was.  And so again we see the dignity and care that was given to the burial of the deceased.  And since it’s mentioned that this woman was a widow, and this had been her only son, she probably had no other means of providing for herself, and so Jesus had compassion on her and raised her son back to life.

Care and planning had gone into the “funeral” of this young man.

However when Jesus had been crucified, there wasn’t time for planning.  Jesus was arrested one night, He was “tried” the next morning, then He was scourged and crucified that same day.  Keep in mind that there was a mater of “convenience” that took some precedence with the burial of Jesus’ body.  The scripture said,  “Therefore, on account of the Jewish day of preparation  (the Passover),  because the tomb was nearby, they laid Jesus there.”   John 19:41

The friends and family of Jesus may have wished that they had more time to deal with Jesus’ body.  And they may have wished that He could have been buried elsewhere, but the situation didn’t allow it.  So we can see that the location wasn’t really what was important, nor was the type of tomb an issue, but rather the respect given to what God had created, is what was important.  I don’t see any reason that we shouldn’t feel the same way. 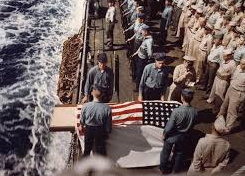 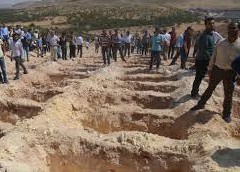 In certain situations, a “burial at sea” has been the only alternative to the respectful handling of bodies.  Such as was the case in certain military situations throughout history.  At other times in history, and because of certain circumstances, “mass graves” have been the only choice people had.

Where Did the Burning of Bodies , or Cremation, Originate?

I doubt that anyone could say for certain, but it is known that the burning of bodies has been a practice since at least around 1700 BC or even before.  It is a fact that various cultures practiced this method of disposing of dead bodies based on their beliefs concerning the afterlife.  Some ancient cultures, such as the Hindus, believed that the spirit had to be freed from the body so that it could continue on it’s journey to the spiritual realm.  The practice of burning the body seems to be, in their eyes, a way to ensure the release of the spirit from the body.

I’m sure that you’ve heard how many people who refused to denounce their opposition to Roman Catholicism during the middle ages, were burned at the stake.  The Roman Catholics of that era, truly hated these people who opposed their religion and it was thought that by burning the body, they would somehow hinder the future resurrection of those people.  And those who were thought of as being “witches” suffered the same fate.

It could also be that cultures that historically have not believed in a physical resurrection, have practiced burning, or cremation.  I do know that some people who are of the Christian faith, who DO believe in a physical resurrection, do NOT agree with cremation for that reason.  They feel that the cremation of a body that is destined to be resurrected, is against God’s will.  However, even though the very foundation of Christianity is based on the assurance of the resurrection, the bible clearly states that it will NOT be the physical body that is resurrected, but rather it will be a “spiritual body”.

This fact is borne out very plainly in a couple of verses from  1 Corinthians chapter 15.   In  V-37  our burial and resurrection, is being likened to the planting of a seed, and the crop that results.   It says in that verse,  “And that which you sow, you do NOT sow the body that will be, but a bare grain, perhaps of wheat or of something else.”

But regardless of how plain the bible is, there are still many people who believe in a physical resurrection.   And this belief influences how they feel about cremation.  Just like the belief that the spirit needs some kind of “help” to be freed from the body at death, and so consequently this belief has caused some to practice cremation, while the other belief has caused some to refuse to practice cremation. 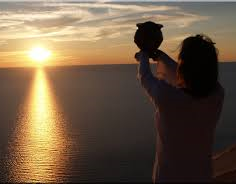 So you can easily see how the religious beliefs of a person, or a culture,  can influence how they feel about cremation, and whether they believe it to be right or wrong.  But as with any religious belief, we need to go to the bible for our teaching.  If the bible has something specific to say about this subject, then we are obligated to believe it and to practice it.  But if the bible is silent on the subject, then what we practice is a matter of personal opinion and personal preference.

As we have already seen, the bible clearly gives it’s approval of burial as a means of depositing the bodies of the deceased.  Whether that burial is in a tomb, or in the earth, it doesn’t matter.  And where a body is buried is also not the important issue.  The important issue is that we have the proper respect for how we return back to the earth, the body that God had created.

In our next lesson, we’ll look at some actual bible examples of people burning the bodies of the dead.

I hope that this lesson has wet your interest and that you’ll go ahead and read  BURIAL AND CREMATION PART 2,  where we will focus on what the bible says about the burning of dead bodies.

Until next time, thanks for being here, and may God bless you in the study of His word.