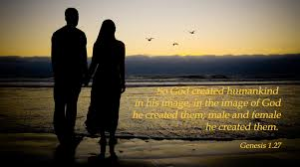 The title of this study is taken from  Genesis chapter 1, and verse 27;  “And God created man in His own image, in the image of God, He created man.  Male and female, He created them.”

The word “man” in this verse, and in many other verses, is used in a generic sense, and it refers to “mankind”.   God created mankind, in His own image.  The word “them”, in the last part of the verse refers to those who make up “mankind”.  So then mankind is made up of both male and female.   And of course, we know WHY God created both male and female.  Because if God had only created one or the other, the species would have died out very soon.

But God decreed in  verse 28;  “Be fruitful and multiply, and fill the earth and subdue it..”

God could have created an entire race of immortal beings, of neutral gender, or of no gender at all, to fill the earth and subdue it, but He didn’t.  Instead, God created a race of mortal beings, that had the ability to multiply, over and over again, and fill the earth.

Now, the subject of this study ISN’T whether man was created mortal or immortal.  But since that subject was mentioned in a recent bible study, I thought I’d just say a few words about it.

We’re told in  Genesis 2, verse 7;  “Then the Lord God formed man of the dust from the ground, and breathed into his nostrils the breath of life, and man became a living being.”  Some versions say;  “a living soul”.   The very definition of a soul, is a living being.   So then God formed a body, out of the dust from the ground, and then He “breathed” into that body the breath of life, which is man’s spirit.  And that spirit caused that body come to life.  The body, which at first was lifeless, BECAME a living being, or a soul, when the spirit was joined to it.

Jesus affirms the truth of that concept, in  John chapter 6, verse 63,  when He said;  “It is the spirit that gives life, the flesh profits nothing.   The flesh by itself is just dust, nothing more.  It profits nothing.  The bible never suggests that the flesh ever had any immortal qualities, it simply says that it’s dust.

We’re told in  1 Corinthians 15, verses 47 thru 49;  “The first man (that’s Adam) is from the earth, earthy.  The second man (that’s Christ) is from heaven.  As is the earthy, so also are those who are earthy;  And as is the heavenly, so also are those who are heavenly.  And just as we have borne the image of the earthy, we shall also bear the image of the heavenly.”

So we can see that Adam’s body was of the earth, it was earthy, just like our bodies.  But we also see that this earthy body is not who we are.  That verse says;  “And just as WE have borne the IMAGE of the earthy, WE shall also bear the image of the heavenly.”   Our being is not simply the IMAGE that we bear.  Because that image is going to change.  Our being is more than just that image.  Who WE are, is not our body at all, but rather, WHO we are, is our spirit, because our spirit will exist forever.

That is a “Law” of God, and there is absolutely nothing said in the bible, that would indicate that it has not ALWAYS been a law of God;  That physical things are mortal, or temporal, and only spiritual things are eternal, or “immortal”.

It is completely consistent then, with ALL of scripture, that God formed the mortal body of man, from the dust of the ground, and then He breathed into that mortal body, an eternal spirit, “the breath of life”, as the scriptures say.  And that immortal spirit will last forever, returning to God, as it says in  Ecclesiastes 12:7,  when the body dies and returns to the earth.

You might have read or heard the news story this past week, about a Canadian woman who had a child, and has requested that the hospital list the gender of the child on the birth certificate, as “unknown”.  The woman has already been given some kind of Identification card for the child, from the hospital, that lists the gender as “unknown”.

This probably sounds a bit unbelievable to a lot of people, but it’s the truth, this is really happening.  Of course, everyone knows that by simply holding that little newborn baby up to look at, is all that it takes to determine it’s gender.  Even the mother of that baby KNOWS, that it already has a gender that’s been given by God.  That’s perfectly obvious.  But the problem is, that the mother doesn’t want to ADMIT that her baby’s body has been created with a specific gender.  The mother claims that she wants her child to be able to grow, and to decide for itself, what gender it really is, as if our growing mental capacity will reveal what the body doesn’t already reveal.

Did Nature Make a Mistake

Some people have come to the conclusion, that nature can somehow make a “mistake”, and that the body they’ve been given, doesn’t match their true gender.   That’s why we have people claiming that they’re a woman “trapped” in a man’s body, or that they’re a man “trapped” in a woman’s body.  Well they’re right about one thing;  Our spirit, does NOT match the gender of our body.  What people don’t understand, is that our spirit doesn’t HAVE any gender.  Our spirit is simply housed in a physical body during this life, and it’s the body that has the gender, not the spirit.  And the spirit will be housed in a different body, after the resurrection.  Then, we will receive a “genderless” spiritual body, to last throughout eternity.

And since our physical life, “is but a vapor that appears for a little time, and then vanishes away”  (James 4:14)  the time our spirit spends in this male or female body is really very insignificant.

Jesus said in  Mathew 22, verse 30;  “For in the resurrection, they (the spirits that have been separated from their physical bodies) neither marry, nor are given in marriage, but are like angels in heaven.”    The truth that Jesus is telling, is that when our spirit is resurrected, there won’t be husbands or wives. There won’t even be male or female, but rather, we will be without gender, like the angels.

Our bodies ARE either male or female, there’s no doubt about that.  So then if there’s neither male or female in Christ, what part of me is IN Christ?  It can’t be my body can it?  So it must be my spirit that’s IN Christ.  Our spirit is WHO we are.  “And just as WE have borne the image of the earthy, WE shall also bear the image of the heavenly.”

A Chance to Know the Truth

It makes me wonder what kind of life that poor child is going to have.  The one who’s mother wants the gender to be listed as “unknown”, on the birth certificate.  Do you think it’s possible, that he or she will never even have a fair opportunity to understand the truth, because of what the mother will expose him to?  And how many other kids are going to be in the same situation?

There’s an epidemic of psychological illness in the world, and people don’t even have any desire to know the truth anymore.   People actually believe that they have “risen above” the prejudices of gender.

Of course, what people need to realize is that it’s God who decided to introduce gender into the world.  And I suppose like all things that God has created, mankind has done his best to turn the “good” into something “bad”.  And so people think that your gender is a “bad” thing, and that they have to “fix” it.  I suppose that societies all over the world, have created stigmatisms, and prejudices associated with gender, that too many people felt they couldn’t live with.

In the same news article that told of the Canadian woman, it also told how schools are being forced to comply with new “standards” where Lesbian, and Gay, and Transgender practices, MUST be taught, as normal and acceptable.   One Jewish school is involved in a lawsuit to defend it’s right to stand up for the morality of the bible, instead of condoning this “social morality”.  But I’m afraid the school will probably lose it’s religious rights.

What can we do as Christians?  How can we turn things around?  I guess I really don’t think we can, “turn things around”.  It might be the case, that this is something that has to run it’s course throughout the world.  Obviously, if the practice of this kind of morality were to become too widespread, and continue long enough, then the human race would simply die out, because the death rate would continue to “out-pace” the birth rate.

There was a sect of Jews in Jesus days and afterwards, called the Essenes.  The Essenes believed strongly in celibacy.  But the Essenes didn’t last very long, in part, because of the very fact that they practiced celibacy.  If a population of people don’t reproduce, then obviously that group will eventually become extinct, unless it can convert enough people from outside their ranks.

Of course, God’s word doesn’t say that the human race will become extinct, but rather He says that the heavens and the earth will be destroyed by fire.   (2 Peter 3 verse 7, and also verse 10 & 11)

My point is, that since this certainly isn’t the first time in human history, that immoral sexual practice has consumed the people, this belief and practice might jus have to “run it’s course” until it’s replaced by a more appropriate attitude.  One more in line with God’s word.

But what do we do in the meantime?  Well, we just go on preaching and teaching the word of God.  And we keep on trying to be a proper example and influence on the people around us.  What else can we do?  It’s like I mentioned before;  God said in  Isaiah 55, verse 11;  “So shall My word be that goes forth from My mouth;  It shall not return to Me empty, without accomplishing what I desire, and without succeeding in the matter for which I sent it.”

Thanks for being here for this study.  Please be sure to leave your comments or questions in the space provided below.