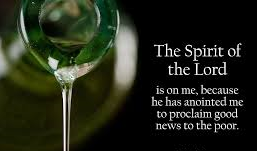 Last week in bible class, the subject of anointing was brought up.  AndWe talked a little about it, but I thought that I saw some questions on some of the faces in the class, and so I thought that maybe I should talk about anointing, in more detail today.

Anointing someone with oil, was a religious practice that we read about in the bible, and mostly in the old testament. It was a symbolic practice, which symbolized the appointment, or the consecration of someone, to a specific position. The oil used was typically olive oil, and Exodus 25, verse 6 talks about mixing spices with the anointing oil. And then, speaking of Aaron the high priest, Exodus 29, verse 7 says; “Then shalt thou take the anointing oil, and pour it upon his head, and anoint him.”

Now as I said, the practice of anointing someone in this fashion, was a symbolic practice, which symbolized the appointment of that person to a special position. In the case of Aaron, he was being appointed, and consecrated as the high priest over the sons of Israel.

But what was really being symbolized, was God’s blessings being poured out upon Aaron, because it was God Himself who chose Aaron, and Aaron’s sons, to be the priests over Israel. And so the oil represented the blessings of God. In a figurative sense, the oil, represented the “fat” of God, in other words, the richness of God, which is bestowed upon man, through the blessings that God gives us. The oil is the “fat” of God

Now, having made those preliminary statements, let me read to you the 23rd psalm..

“The Lord is my Shepherd, I shall not want.  He maketh me to lie down in green pastures, He leadeth me beside still waters.  He restoreth my soul, He guides me in the paths of righteousness for His name’s sake.  Yea though I walk through the valley of the shadow of death, I fear no evil, for Thou art with me.  Thy rod and Thy staff they comfort me.  Thou dost prepare a table before me in the presence of my enemies.  Thou hast anointed my head with oil, my cup overflows.  Surely goodness and loving kindness will follow me all the days of my life, and I will dwell in the house of the Lord forever.”

In all the things that are mentioned in that Psalm, we see one theme, illustrated over and over again.  And that theme is, the providence of God.  We see the sustenance of God, in providing everything that we need, and we see the protection of God.  It’s summed up quite well in  verse 5,  when it says;  “Thou hast anointed my head with oil, my cup runneth over.”

You can imagine what “my cup runneth over” means.  It means that God blesses you so much, and that He provides so much for you, that you’re simply full, and even overfull with blessings from God.  You can’t hold any more blessings, they’re running over!

But do you know what it means for God to have “anointed my head with oil”?   That’s another figurative phrase, just like “my cup runneth over”.   The literal meaning of the Hebrew word “anointed”, means..  “to be fat, to grow fat, or to be fattened”.   The word “oil” means “fat”.   A lot of natural oils come from the fat of animals.  Some oils come from plants though.  Olive oil, comes from the “fat” of the olive.

When  Psalm 23  says that the Lord has “anointed my head with oil”, it means that God has figuratively, poured His blessing over our head, so that those blessings run down over us, much like “my cup runneth over”, and therefore God has “fattened us” with the “fat” of His blessings.

The Blessings of God are Rich Ointment

Oil was always considered to be an ointment to treat sickness and disease.  So then “ointment” is another one of the meanings of the word “oil”.  And it can also mean “fertile” and “lavish”.   Don’t all those words fit in with the idea of blessings from God?   The lavishness, and the fertileness, and the ointment and oil, of God’s blessings.  We’re “fattened” with the fat from God!

Here’s some verses where that very word is translated “fat”, instead of  “anointed”.

Proverbs 15:30  says;  “Good news puts fat on the bones.”   Remember Ezekiel’s vision of the valley of dry bones, in  Ezekiel chapter 37?   God took old dead dry bones, and He made them alive again, and He put “fat” on them.  God made those dry bones, come alive with His blessings.

Here’s an interesting way in which that word is also used though.  Listen to this verse, and see if you can figure out the connection.   Numbers 4:13  says;  “Then they shall take away the ASHES from the alter..”   What does the word “ashes” have to do with prospering and being made fat?   The answer to that, is that most of the meat from the animals that were sacrificed, was used for food.  But, it was the fat portions that were left to be completely burned up.  Therefore the ashes that were removed from the alter, were from the parts of the animal that had consisted of the “fat” of the animal.  Therefore, the “ashes” were the “fat”.

Now, here’s still one more way that the word is used in the old testament, and I’ll use  Psalm 20, verse 3,  as our example, here’s what it says;  “May He remember all your meal offerings, and find your burnt offering, acceptable.”   “Acceptable” is the word used here, instead of “fattened” and instead of “anointed”.    To be “anointed by God” means to be “accepted” by God, and to be “fattened” with the blessings of God.

Just our acceptance alone, is a blessing, that makes us “fat” with the richness of God!  Our “acceptance” by God, is an “anointing” by God, and a “blessing” by God.

The Anointing of Christ

Now let’s look into the new testament.  There are several words which are translated “anoint”, or  “anointed” in the new testament.  But one of those words is often used to mean..  “to appoint, or to consecrate”.   This seems to go along with that old testament meaning of being “accepted” by God.  If God appoints someone, or consecrates them to do a specific work, then that person would be “acceptable” to God,  as the one whom He has chosen for the work.

For example;  Jesus said in  Luke 4:18;  “The Spirit of the Lord is upon Me, because He anointed Me to preach the gospel to the poor.”   In other words, God has appointed, and consecrated, and accepted Jesus as the one to preach the gospel to the poor.  Jesus goes on to say, in this same verse,  “He has SENT Me, to proclaim release to the captives..”   God chose Jesus for the job;  He accepted Him, He blessed Him, He appointed Him, He consecrated Him, and He sent Hm.  God  “anointed”  Jesus, in all those ways.

Here’s another way that the word “anointed” is used in the new testament;  Hebrews 1, verse 9,  is speaking about Jesus, and it says;  “Thou (Jesus) hast loved righteousness, and hated lawlessness, therefore God, Thy God, hath anointed Thee, with the oil of gladness, above Thy companions.”

Once again in this verse, the word “anointed” carries with it the idea of being accepted, and consecrated, and appointed.  Because Jesus loved righteousness, and because He hated lawlessness (or sin) God consecrated Him, and appointed Him, to a very special position.

The scripture says in  Acts 2:36;  “Therefore let all the house of Israel know for certain, that God has made Him both Lord and Christ, this Jesus whom you crucified!”   The position that God appointed Jesus unto, and consecrated Him unto, was that of  “Lord and Christ”.   As  Hebrews 1, verse 9  had said;  Jesus was anointed “above all Thy companions”.  He was placed above everyone, and everything, in heaven and on earth!

But consider if you would, the phrase;  “..with the oil of gladness”.   Once again, “oil” represents the blessings of God;  The “fatness” of God.  Now think about this for a minute;  Would it be a blessing, for God to put His stamp of approval on you?  Would it be a blessing, to know that the God of heaven was overjoyed, and full of gladness, over you?  It sure would be!  It sure would be!

Do you remember the story of when Jesus was baptized, by John the Baptist?   John chapter 3, verse 13  says;  “Then cometh Jesus from Galilee, to the Jordan, unto John, to be baptized.”   Then  Verses 16  & 17  say;  “And Jesus, when He was baptized, went up straightway from the water, and lo, the heavens were opened unto Him, and He saw the Spirit of God descending as a dove, out of the heavens, and coming upon Him.  And lo, a voice out of the heavens saying;  This is My beloved Son, in whom I am well pleased.”

“The oil of gladness”, anointing Jesus Christ.  Listen to the passage in  Hebrews chapter 1,  leading up to  verse 9,  which speaks of the “oil of gladness”..  Actually, let me read  verses 5 thru 10..

“For unto which of the angels said He at any time;  Thou art My Son, this day I have begotten Thee?  And again, I will be a Father, and He shall be a Son?  And when He again bringeth the firstborn into the world, He saith;  And let all the angels of God worship Him.  And of the angels He saith;  Who maketh His angels winds, and His ministers a flame of fire;  But of the Son He saith;  Thy throne, O God, is for ever and ever;  And the scepter of righteousness, is the scepter of Thy kingdom.”

“Thou hath loved righteousness, and hated iniquity, therefore God, Thy God, hath anointed Thee with the oil of gladness, above Thy fellows.  And Thou Lord, in the beginning, didst lay the foundation of the earth, and the heavens are the work of Thy hands.”

All of that, is an example of God the Father, “anointing” Jesus Christ, with the “oil of gladness”.  The testimony of the God of heaven, testifying that Jesus is the Christ, the Son of the living God.  That, is “the oil of gladness”.

Anointed With the Holy Spirit

The bible says in John 3, verse 34; “For He whom God hath sent, speaketh the words of God; For He (God) giveth not the Spirit, by measure.”  Although the word “anointed” isn’t used in that verse, the idea of an anointing is certainly there.  Jesus was blessed, and fattened, with the very Spirit of God;  and not sparingly, but completely!

God didn’t give Jesus only a portion of the fatness of the Spirit, in other words, of the blessing of the Spirit. But rather, God gave Jesus Christ the absolute fulness, of the Holy Spirit of God, “without measure” as some versions say.  No measuring, no holding back, but he full and complete Spirit of God, was in Jesus Christ.  You might say, God anointed His head with oil, and His cup runneth over.

The bible says, in  Colossians 2, verse 9;  “For in Him (in Jesus) dwelleth the fulness of Deity, bodily.”  In other words, the fulness of being God, yet in the flesh.  Jesus was as fully “anointed” with the Spirit of God, as a body could be!

How are Christians Anointed ?

And so in closing, I’ll simply offer the invitation to hear God’s word, and to believe every word of it.  To believe that Jesus is the Christ, and to confess that faith openly.  To repent of your sins, and to be baptized for the forgiveness of those sins.  And to remain faithful unto death.  There’s a crown of life, waiting for the faithful;  Let’s all make sure that we’re among that number.