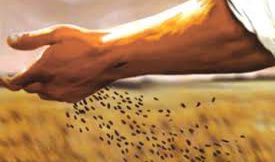 The Seed is the Word of God

We’re told in  1 Peter 1, verse 23;  “For you have been born again, not of seed which is perishable, but imperishable, through the living, and abiding word of God.”   Remember what Jesus said in  Mathew 24:35..  “Heaven and earth shall pass away, but My words shall not pass away.

And God’s word is powerful.   Hebrews 4:12  tells us;  “For the word of God is living, and active, and sharper than any two-edged sword.  And piercing as far as the division of soul and spirit, of both joints and marrow, and able to judge the thoughts and intents of the heart.”   The word pierces, it divides, it judges!

Everything that lives, was spoken into existence by God.  It’s really quite incredible how the bible describes the word of God.   The word is “active”.   It’s not passively “just there”.  don’t think of God’s word as simply a word printed on a page of a book.  God’s word is “actively” producing life in people’s hearts.

1 Peter 1:23  said that the word is “abiding”.   What does that mean?   Well, to “abide” means to remain, or to stay with.  So then, think of it this way;  The word is compared to seed that is sown in the ground.  I think some seeds will die if the conditions for germination aren’t met within a certain length of time.  But I was reading how some seeds can remain dormant for years.  In some cases, for many years.  I  guess you could say that those seeds were “abiding” in the soil.

And the “seed” from God, also abides in the soil that it’s sown in.  But God’s “seed”, is an “imperishable seed”.  There’s absolutely NO time limit at all, on how long God’s word could remain alive, in someone’s heart.  But it’s “dormant”,  “it’s active”.  It’s always working in the heart of the one who hears it.  Very few people obey the word when they first hear it, although some probably have.  But the point is;  God’s word is alive, and it is active, and it abides.

Don’t you get a little disappointed when you sow the seed, but don’t get any positive response?  I know I do.  But really, we shouldn’t.  As long as that seed is in someone’s heart, there’s always the chance of that person obeying what the word teaches.  Just about all of us are aware of the fact, that we had a gentleman in this congregation, who attended services faithfully with his wife, for many, many years.  But he didn’t obey the word, even though he had heard the “whole counsel of God”, many times over.

But the word was there in his heart and in his mind.  And that word was living there, and it was abiding there, and evidently it was active, because after all those years, shortly before his death, he did obey the gospel.  “But thanks be to God, who gives us the victory, through our Lord Jesus Christ.”  1 Corinthians 15:57.

So we shouldn’t be disappointed and discouraged, if no one seems to be responding to our efforts to teach the word.  Instead of being discouraged, we should just spread the word some more!  And we should KEEP spreading the word, because of the FAITH that we have in God’s word.

Here’s the assurance that God gives us..

God says, in  Isaiah 55: 10 & 11;  “For as the rain and snow come down from heaven, and do not return there without watering the earth, and making it bear a sprout, and furnishing seed to the sower and bread to the eater;  So shall My word be, which goes forth from My mouth.  It shall not return to Me empty, without accomplishing what I desire, and without succeeding for which I sent it.”

When we sow the seed of God’s word, that word WILL accomplish the purpose for which God has sent it.  That doesn’t mean that everyone we talk to about God, will drop everything and obey the word.  But it does mean that if we will at least be faithful enough to SOW the seed, then God will see to it that His purpose is accomplished.

I think that we all typically think of God’s word, as having just one purpose;  That being to save our soul.  The scripture does say..  “For you have been born again, not of seed that is perishable, but imperishable, the living and abiding word of God.”  Being born again of course of being saved.

But yet the Lord says that His word will NOT return to Him empty, but that it WILL accomplish that which it was sent for.  The word actually serves a two-fold purpose.  Not only does the word save the faithful, but it will also judge the unfaithful.

Jesus Himself said, in  John 12:48;  “He who rejects Me, and does not receive My sayings has one who judges him.  The word that I have spoke, is what will judge him at the last day.”   God doesn’t DESIRE for anyone to be judged and condemned by His word.

1 Timothy 2:4  tells us that God,  “..desires all men to be saved, and come to the knowledge of the truth.”  And Jesus assures us in  John 3:18;  “He who believes in Him, is NOT judged!”  But the truth is, many WILL be judged.  Jesus says in that same verse;  “He who does NOT believe, has already been judged, because he has not believed in the name of the only begotten Son of God.”

God’s word is NOT passive, and idle.  It is living, and it is active, and it’s either going to save us. or it’s going to judge us!   And it’s our choice, which one it’s gonna be.  But either way, God’s word, is going to accomplish, God’s will.  It’s just like Jesus said;  “Heaven and earth shall pass away, but My words shall not pass away.”

But let’s get back to the idea of God’s word “abiding”.  Just like some physical seeds can abide in the soil for many years, so can the “living an active word of God” abide in someone’s heart.   So then, if we sow the “pure” word of God, we need to learn to be patient, and trusting, knowing that the word we have sown will accomplish it’s purpose.   I don’t know about you, but I’m always anxious to see someone respond with obedience to the word.

But do you remember what the apostle Paul said, in  1 Corinthians 3, verse 6;  “I planted, and Apollos watered, and God gave the increase.”   So then even if we are faithful to plant the seed, it could very well be, that someone else is going to have to come along after us and water that seed, before it sprouts.  But we know that the word we planted is alive, and it’s active.  And as long as that person who’s heart we planted the seed in, doesn’t let satan come along and completely pluck that seed OUT of their heart, the word is going to be there.

The bible does say though, that the spirit of evil CAN take the word right out of someone’s heart.  That’s what Jesus says in the parable of the sower.  He said in  Luke 8:5;  “The sower went out to sow his seed, and as he sowed, some seed fell beside the road, and it was trampled under foot, and the birds of the air DEVOURED it.”  They completely ate it up, that’s the meaning there;  There was nothing left of that seed.

Jesus explains in  verse 12,  that,  “Those beside the roadside, are those who have heard the word, then the devil comes and TAKES AWAY the word from their heart, so that they may not believe and be saved.   Verse 4  said that the seed had been “trampled under foot”.  That phrase “trampled under foot”, is used figuratively in scripture, to mean..  “to spurn, and to treat with rudeness and insult”.

That’s exactly how that phrase is used in  Hebrews 10:29.  Here’s what it says;  “How much severer punishment do you think he will deserve, who has trampled under foot, the Son of God, and regarded as unclean, the blood of the covenant, by which you are sanctified, and has insulted the Spirit of Grace?”

Remember how the word will serve a second purpose?  Listen to  verse 30;  “For we know Him who said;  Vengeance is Mine, I will repay, and again;  The Lord will JUDGE His people.”

It’s true that sometimes when we sow the word, someone will regard it as trash, and they’ll “trample it under foot”.  And that’s all the more reason to be sowing even more seed!  There’s no shortage of the seed, we just need to keep spreading it around that’s all.   It will accomplish God’s purpose, one way or the other.

I don’t know about you, but I’ve seen a lot more people who want to do good, than who want to do bad.  And so there’s always a good chance, that when we talk to someone about God, the words we say will abide in their heart, and that they WON’T just trample it under foot.  And if we can just get a little seed in their heart, then it can abide, and live there.  We may never see them converted, but there’s always the chance that someday, that seed might begin to grow.

And if that seed does sprout and grow, it’s because God is giving the increase.  You might think that some fancy speaker has an advantage over you and me in sowing the seed.  But in reality, we are ALL on equal footing.  If we have faith in the fact that it is the word of GOD that causes someone to be converted, then it doesn’t mater one bit, who is sowing the seed.  Just as long as it’s being sown, God will take it from there.

So then, is there really any reason at all that you and I shouldn’t be sowing the seed, every chance we get?  You don’t have to think that you’re going to convert someone on the spot.  I don’t think anyone can do that.  Unless the hearer is just so close to obeying anyway, and you just happen to catch him at that precise moment.  But if that were to happen, then you’d just be watering the seed that already had been planted somehow.  And it would still be God who was giving the increase.

You know, Jesus described the kingdom as a tiny mustard seed, in  Mark 4:31 & 32.  He said that the kingdom, “..is like a mustard seed, which when sown upon the soil, though it is smaller than all the seeds that are upon the soil, yet when it is sown, grows up and becomes larger than all the garden plants, and forms large branches, so that the birds of the air can nest under it’s shade.”

How did you became a Christian?  It was because someone sowed a little bit of seed in your heart, wasn’t it?  Won’t you do that same thing for someone else?

The word must be preached.  But who’s gonna do the preaching?  Me?  Yes.  How about You?  Yes.  If you know how to be saved, then you should be telling others how to be saved.  The word “preach” simply means to proclaim.  If you know the truth, then you can proclaim the truth.  That’s all preaching is;  It’s telling someone else, what the bible tells you.

And tell people that if they are a Christian, but they’ve become unfaithful, that all they need to do is truly repent, and ask God for forgiveness, and God will forgive them.

Think about who you’re going to tell first.