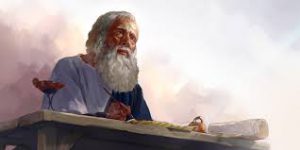 Verse 1;  “See how great a love the Father has bestowed upon us, that we should be called children of God.  And such we are.  For this reason the world does not know us, because it did not know Him.”

How great a love, the Father has bestowed upon us!   King David once wrote;  “What is man, that Thou dost take thought of him?  And the son of man, that Thou dost care for him?”  Yet, Thou hast made him a little lower than angels, and dost crown him with glory and majesty.  Thou dost make him to rule over the works of Thy hands.  Thou hast put all things under his feet.”   Psalm 8:4 thru 6.

We’re made in God’s image, and we’ve been given the rule over His creation.   God has without a doubt, bestowed a great love upon us.   1 Peter 5:6 & 7  says;  “Humble yourselves therefore, under the mighty hand of God, that He may exalt you at the proper time, casting all your cares upon Him, because He cares for you.”   It’s no wonder that David asked;  “What is man, that Thou dost care for him?”

God created us in His own image, and we failed Him.  So what does He do?  He sends His Son to die for us.  “For God SO loved the world, that He gave His only begotten Son, that whoever believes in Him, should not perish, but have eternal life.”   John 3:16.

You can take that verse a lot more personally though, than it’s written.  It says;  “For God so loved the WORLD”, but you can take that to mean;  “For God so loved YOU.”   He loves each and every one of us, so much, that He’s done everything except FORCE us to be saved.  But hasn’t He made it easy though?  Just believe His word, and do what it says, and we have the promise of heaven.  And all the while, as we go through this life, we can cast all our cares on Him, because He cares for us.

Do you trust God?  I do.  So let’s not worry about things that God hasn’t revealed.  Because here’s what He has told us;  “We know that when HE is revealed (that’s Jesus) we shall be like Him, for we shall see Him like He is.”   That’s enough for me.  Isn’t that enough for you?

Jesus Christ is going to be revealed form heaven, “and every eye shall see Him”.   And we will see Him like He is, and we, will be like Him!  If God were to try to tell us, right now, what exactly what we’ll be like, we probably couldn’t understand it anyhow.  Trust God; God cares for us, and He knows what’s best.

Verse 3  says;  “And everyone having this, the hope in Him, purifies himself, even as He is pure.”  Do you know what “the hope in Him” is?  The “hope in Him”, isn’t just a wishing and a hoping.  “The hope in Him” is a complete trust, and a confident expectation.  It’s KNOWING the promises of God, which cannot fail!

Romans 5:5  says;  “And hope does not disappoint, because the love of God has been poured out within our hearts, through the holy Spirit, which is given to us.”   There is nothing “unsure” about “the hope in Him”!

And when you practice sin, you also practice lawlessness, because sin IS lawlessness.  God has given us laws to live by, and when we fail to follow even one of those laws, we’ve sinned.  James 2, verse 10  says;  “He who keeps the whole law, and yet stumbles in one point, has become guilty of all.”   And the apostle John wrote, in  1 John 1:8;  “If we say we have no sin, we are deceiving ourselves, and the truth is not in us.”   We will ALL sin!  That’s simply a fact.

When we “stumble in one point” and become guilty of sin, does that mean we’re “practicing sin”?  It doesn’t, does it?   We know the difference between “stumbling” because of our own weakness, and “practicing” something as a way of life.  One of the meanings of that word “practice”, is..  “to make a pathway”.  Another meaning is..  “to provide for one’s self”.  In other words, when someone “practices” sin, they “make a pathway, and provide the very means by which they can sin.  Have you ever created the opportunity for yourself, so that you could sin?   That’s what “practicing” sin is.

Listen to  1 John 3, verses 5 & 6;  “And you know that He appeared, in order to take away sins, and in Him is no sin.  No one who abides in Him sins.  No one who sins, has seen Him, or knows Him.”   There is only one reason that God came to this earth in the form of Jesus.  And that is to take away sins, so that we could be saved.  Remember what Jesus said in  Luke 19:10;  “For the Son of Man is come to seek and to save that which was lost.”

If we are going to give any honor at all, to the very purpose for which Jesus came, we will abide in Him, and NOT abide in sin!   That’s all there is to it.  But if we’re complacent, and are satisfied with sinning, then we dishonor the very purpose that Jesus came for, and we dishonor all the suffering that He went through, and we dishonor the blood that He shed, and the death that He endured.  Have you thought of it like that?

“No one who abides in Him, sins.”  And the idea there is still, the “practicing of sin”.  That’s not saying that you won’t stumble and commit a sin.   1 John 1:8  says;  “If we say we have no sin, we deceive ourselves, and the truth is not in us.”  But if you “abide in Him”, you won’t provide a pathway for yourself, to enable yourself to sin.

Let me read three more verses from  1 John chapter 3.  Here’s  verses 7, 8, & 9;  “Little children, let no one deceive you;  The one who practices righteousness, is righteous, just as He is righteous.  The one who practices sin, is of the devil;  For the devil has sinned from the beginning.  The Son of Man appeared for this purpose, that He might destroy the works of the devil.  No one who is born of God practices sin, because His seed abides in him, and he is not able to continue sinning, because he is born of God.”   Your version might say;  “He cannot sin”, but that’s a wrong translation.  The proper translation is, that you are not able to CONTINUE sinning, IF you abide in God.

Those are some pretty strong words, actually.  “ANYONE, who does NOT practice righteousness..  in other words;  “ANYONE, who does not obey God’s commands, is NOT of God!”  “Nor the one who does not love his brother.”   Loving your brother IS one of the commands of God, isn’t it?   Verse 11  says;  “For this is the message which you have heard from the beginning, that we should love one another.”   John stresses that over, and over again, doesn’t he?

What if we obey SOME of the commands of God?  Are we righteous if we obey SOME of God’s commands?   If there are some commands of God, that we don’t obey, can we still consider ourselves to be righteous?    I just read a quote the other day;  It said;  “Most people want to be good, but not too good, and not all the time.”   Do you think that’s a pretty accurate statement?  Unfortunately, I think it is pretty accurate.  I think that most people believe that Christianity is a really good thing, but they wouldn’t want to get too carried away with it.

One of our older church members who has now passed away, used to tell about how some denominational people around town, referred to the church members here, as “the kooks up on the hill”.  Do you know why they called the church here, a bunch of “kooks”?  It’s because the church here was obsessed, with keeping every command of God!   And that’s exactly the way we need to be today.  We need to be obsessed!   Obsessed with God!

We are NOT supposed to fit into that world out there.  We’re supposed to “come out from among them, and be ye separate”.   2 Corinthians 6:17.   Do you know what it says in  Revelation 18:4 & 5?   Here’s what GOD says;  “Come out of her, my people, that you may not participate in her sins, and that you may not receive her plagues!”  There’s a warning right from God!  We don’t want to have a part of the judgment that God ahs in store for the world.  “For her sins have joined together as high as heaven, and God has remembered her iniquities!”

Do you want YOUR sins, to be joined together with the sins of the world, as they pile up as high as heaven?   Do we want God to remember OUR iniquities?   If we don’t want that to happen, then we had better be obsessed with God, and with obsessed with obeying His commands.

“DO NOT BE CONFORMED TO THIS WORLD”, but be transformed by the renewing of your mind, that you may prove what the will of God is, that which is good and acceptable and prefect.”   Romans 12:2.

I don’t care if the world does think I’m a “kook”, I care about what God thinks!

I want to mention something again, which I’ve mentioned numerous times before.  I want to talk for a minute or two, about the sin, of not assembling together on the Lord’s day, to worship God.  We as Christians, are obligated to God, to assemble on the first day of EVERY week, to partake of the Lords supper.   1 Corinthians 11:18 thru 22  makes that abundantly clear.  And when we assemble together, we also sing, and pray, and give, and hear God’s word.  And if we fail to do it, we have sinned.   Hebrews 10:25  say;  “Do NOT forsake the assembling of yourselves together, as is the habit of some..”     God’s words..  Do NOT forsake the assembly!

I’ll only say this once, because it’s easy to understand;  When you make plans to not assemble with fellow Christians, you are providing a pathway for yourself, and enabling yourself to sin.  And that is the very definition of “practicing sin”.

The gospel of Christ, provides for us a “plan” for being forgiven of our sins, and being saved eternally.  But that plan involves obeying God’s commands.  We need to hear His word in order to acquire faith  (Romans 10:17).  We need to repent of our sins, in order to be forgiven of them  (Luke 13:3).   We need to confess the name of Christ, in order to be confessed before God in heaven  (Mathew 10:32-33).   And we need to bury our old sinful life in baptism, so that we can be “born again”, as Jesus said, not of flesh and blood, but of water and the Spirit,  John 3:5.

Then we can “walk in newness of life”,  as it says in  Romans 6:4.   And then we can practice righteousness, by continuing to obey every command of God.