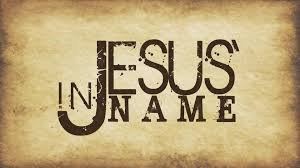 By The Authority Of Jesus

Recently I received a notebook from someone in the mail, and in the notebook, the man detailed his beliefs on salvation through baptism into Christ, and his beliefs on the Holy Spirit.

One of the many misunderstanding that he has, is that he believes Jesus was glorified on the day of Pentecost, when the apostles were miraculously filled with the Holy Spirit, and spoke in various languages, or “tongues” as the bible calls it.  He doesn’t realize that Jesus was actually glorified when He ascended back into heaven, 10 days before Pentecost.  Here’s one of the verses that he cites, and misunderstands..

John 7:39;  “Moreover, He said this concerning the Spirit, whom those having believed on Him, were about to receive;  Indeed the Spirit was not yet, because Jesus not yet was glorified.”   The writer of the notebook thinks this refers to the day of Pentecost, and the giving of the gift of tongues.  But the actual meaning of this verse, doesn’t have anything to do with miraculous gifts, but rather, it has to do with us inheriting eternal life from the Spirit of God.  Jesus had just said, in  verse 38;  “He who believes in Me, as the scripture said;  From his innermost being shall flow rivers of living water.”

The “rivers of living water” refers to the Spirit who gives life.  And that’s exactly what  verse 39  says;  “He said this concerning the Spirit..”

I read to you a very literal translation of  verse 39,  but let me give you the literal meaning of the words;  “..He said this concerning the Spirit, (the Spirit refers to the Life)  “..the LIFE, which those who believed in Him were about to assertively lay hold of.  For the LIFE was not available yet, because Jesus was not glorified yet.”

Our translations say;  “The Spirit, whom they who believed in Him were about to RECEIVE.”  But I want to show you what the exact meaning of the word translated “receive” is.

First, here’s what it does NOT mean;  It does not simply mean that someone has given you something, because this word emphasizes the volition, in other words, the assertiveness of the receiver.  Listen to the exact definition of the word translated “receive”..

“To lay hold of, by aggressively, and assertively, accepting what has been made available, and what has been offered.”   Now that says a whole lot more than you would commonly think of, when you hear the word receive.

I’m going to give you an illustration;  Suppose that I walked up to someone, and handed someone a bible.  You can say that he has just received that bible.  But that’s not what God means, when He uses the word that is typically translated “received”.   Here’s what the God means by that word..

Now suppose I take that bible, and lay it down on the table.  And then I ask someone to get up, and come here, and “receive” the bible that I have offered, and made available to them.  If you wanted this bible badly enough, you’d probably take the initiative, and come over and receive it.

For example;  It says in  Acts 2:39;  “..And you shall receive the gift of the Holy Spirit.”  The people on the day of Pentecost had to “assert” themselves, in order to receive that gift.  It says in  verse 41;  “So then those who had received his word, were baptized..”   Those people on that day, had to assert themselves, they had to DO something.  Namely, they had to repent and be baptized as Peter had told them to do, in  verse 38.

Let’s say that this bible represents the forgiveness of sins.  In a way it is, because the words in this bible teach us how to be forgiven.  If I were to lay this forgiveness on this table, and offer it to you free of charge, would you get up and come over here and receive it?   That sounds pretty easy doesn’t it?   But what if I told you that on your way up here, I want you to confess your faith in the fact that Jesus is the Christ, like it says to do in  Mathew 10:32?   Would you do it knowing the stipulation about confessing faith in Christ?

What if you knew, that inside this bible, there was a check made out to you, for a million dollars, and it was from the richest bank in all the world, and you knew they had the money to cover the check?   Now would you get up, and come here, confessing your faith that Jesus is the Christ, and receive that bible?  You would, wouldn’t you?

Now what if I said that as you were confessing your faith in Christ, that I also wanted you to be sincerely repenting, in your heart and in your mind, for everything you’ve ever done, that was contrary to what the bible says, just like we’re told to do in Luke 13, verse 3, and in  verse 5,  and in  Acts 17 verse 30?  Would you still take the initiative to come here and receive this bible?   You would, wouldn’t you?

Let’s just make that check for 10 million dollars, instead of one million, just to give you a little more incentive.   So now, there’s forgiveness waiting for you, just like it says in this bible, and there’s also a check for 10 million dollars.  But  you’ve got to take the initiative, and come here, confessing your faith in Jesus Christ, and repenting of your sins.  But when you get here, I want you to do one more thing.  I want you to step into a big tub of water, and someone will completely immerse you in that water, (you’ll be “baptized” as we call it) to simulate a burial.  And then you’ve got to come up out of the water, to simulate a resurrection, and once you’ve done that, you will have received the forgiveness of your sins, because that is exactly what God has ordained that all people must do, in order to be forgiven.  And then you can also take hold of the bible, with the check in it for the 10 million dollars.   Would you do it?   I’m guessing that you would.

What if God were to give you His promise, of eternal life in heaven?  Wouldn’t that be worth a whole lot more than just 10 million dollars?  Think about it..  How many years would it take you to spend that 10 million?  Would it take 20 years?  Maybe you’d have it spent in only 10 years.  Lots of people have spent 10 million even quicker than that.  And then it’s gone.  It was fun while it lasted, but then it’s gone.

Now, how  long would eternal life last you?  Well, it would last for eternity, wouldn’t it?  So then, what would you rather have?  You can have all the fun that money can buy, for as long as it lasts, or, you can have more enjoyment than you can even imagine, for eternity?

I started to tell you about this person who sent us this notebook.  How he or she, misunderstands about what it means to receive salvation.  Let me show you what else he or she misunderstands.  Just so YOU never misunderstand it.

A lot of focus is put into the words “in the name of Jesus”.   Acts 2:38  says;  “Repent, and let each one of you be baptized, in the NAME of Jesus, for the forgiveness of your sins.”

Acts 4:12  says;  “And there is salvation in no one else.  For there is no other NAME under heaven, that has been given among men, by which we must be saved.”

This person is preoccupied with the word “name”.   In his or her, own words, “It is the specific NAME of Jesus that saves.”   Is that even possible?  For a NAME to save someone?  So then, could we simply write that name on our forehead, or somewhere, and be saved?   Sounds a little silly doesn’t it?  But that’s the position taken in this notebook.

Listen to these verses..

Acts 10:43;  “Of Him, all the prophets bear witness, that through His name, everyone who believes in Him, receives forgiveness of sins.”   (There’s that word “receive” again)

Now listen to this person’s words;  “In light of these passages, we have gravely misunderstood, and underestimated, just how important specific NAME of Jesus is, to our salvation.”

Now here’s what else is said;  “The argument is made, that the new testament examples of baptism in the “name” of Jesus, simply mean that the converts were baptized “in the manner” that Jesus had authorized.”  And here’s an example that’s given, of what the “manner” is.

Jesus said in  Mathew 28:19;  “Go ye therefore, and teach all nations, baptizing them in the NAME of the Father, and the Son, and the Holy Spirit.”   But that’s really not describing a “manner” of baptizing, is it?  That’s simply telling us to teach people before baptizing them.

Here’s the “manner” that the bible gives of baptizing someone.   It says in  Romans 6:4;  “Therefore we have been BURIED with Him through baptism, into death, in order that as Christ was raised from the dead by the glory of the Father, so we too might walk in newness of life.”   That’s the “manner” of baptism;  The person being baptized is “buried” in water, and “raised” out of the water.

But do you know what?  I’ve never heard anyone claim that to do something in the NAME of Jesus, means to do it in a certain “manner”.  I’ve never even heard of that.   Here’s what I’ve always heard, that “in the name of Jesus” means..  It means by the AUTHORITY of Jesus.  Jesus is the one who gives us the COMMAND to baptize.  “Go ye therefore, and teach all nations, baptizing them, by the authority of the Father, and the Son, and the Holy Spirit”.  In other words, by the authority of GOD!

“Repent and let each one of you be baptized”, were the words of Peter, in  Acts 2:38,  inspired by the Spirit of God!

You know what a bible dictionary says the word “name” means?   Someone’s “name” refers to their “character, and their reputation, their very essence.”   Thayer’s Greek Lexicon says that it refers to “one’s rank, and authority, and interests, and commands, and excellences, and deeds.”

You’ve heard us talk about the little Greek word “eis”, haven’t you?  “Eis” spelled E I S.   And pronounced “ice”.    After believing in Jesus, and after repenting of our old sinful behavior, we are commanded by god, to be buried in baptism, on the basis of the authority of Jesus Christ, FOR the forgiveness of our sins.   The word “for” is our English translation for “eis”.   Do you know what that little word means?

It means..  “into, or unto, or among, or towards.”   So then we are baptized, into, or towards, the forgiveness of our sins.   But listen to this, there’s more.   A word study of this little word says;  “Eis” properly means.. “into” denoting motion into.  It implies penetration into union with a particular purpose and result.”   That’s pretty specific.  Listen to exactly what it means..

If you have never been baptized, on the basis of the authority of Jesus Christ and of His command, then you have not been brought into “union” with the forgiveness of your sins.   And that means you’re still in sin, and you need to get out of those sin, now!  God forbid that you should die, while still in sin!