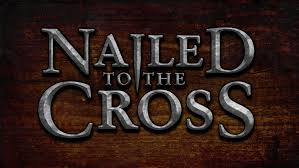 Nailed To the Cross

Think about the idea of a sin being judged.  What would you judge, or what would God judge, pertaining to a sin?  Would God judge that one sin was worse then another, or that one was not as bad as another?  That would be contrary to God’s very own word.  God tells us in  James 2:10;  “For whoever keeps the whole law, and yet stumbles in one, has become guilty of all.”   So there you have it.  It doesn’t matter what sin you commit.  The outcome is always the same;  Guilty.

For example;  He who named dissentions and factions as “deeds of the flesh”, in  Galatians 5:20, also named envying and drunkenness, as “deeds of the flesh”, in  verse 21.   So then, which sin is worse, drunkenness or factions?  Which sin is worse, envying, or murder?   Do you see the point that God is making?  There is no judgment of sins.  Sin is sin!  Sin is the transgression of the law, and that’s all there is to it.  1 John 3, verse 4  says;  “Sin is lawlessness”, or in other words, sin is “the disobedience to the law”.

Now listen to  James 2, verse 12;  “So speak, and so act, as those who are to be JUDGED by the law of liberty.”  It’s not sin that is judged.  Sin is disobedience to the word of God, there is nothing to judge, pertaining to sin.  Sin is sin, and there’s not sin that’s any worse than another, and there’s no person who is ay worse than another, “we have all sinned, and fallen short of the glory of God.”   Romans 3:23.

So what’s wrong with that?  What makes sin a part of our nature, simply because we’re made of the dust of the earth?  Well, listen to Galatians 5, verse 17;  “For the flesh sets it’s desires against the spirit, and the spirit against the flesh.  For these two are in opposition to one another, and as a result of that, you may not do the things that you desire.”

Here’s an analogy, that make it easier to understand.   What if I said that sickness was a part of our nature?  Is there anyone here who has never been sick?  Probably not, right?  Is there anyone here who truly believes that they will never again be sick in any way?  Probably not.  So then you would understand what I meant, if I said that we have sickness in our lives, right?  Just because we have sickness in our lives, that doesn’t mean that we’re sick right now does it?  And it doesn’t mean that we’re sick all the time, right?  It means that sickness is an inevitable part of part of our human existence.  Well that’s exactly what God means when He says that “If we say we have no sin, we deceive ourselves..”  God has already decreed that because of our physical nature, sin is a part of our life.  It’s no more complicated than that.

I’ve told some of you about the fella I worked with who is of the Pentecostal faith.  He believes that he will never be sick again.  he believes that when he feels like he is going to get sick, he just prays to God for healing, and God heals him.  so I said, well then you’ll never die right?  And he said; “Oh sure I’ll die someday, but it won’t be because of sickness, it will be from “natural causes”.   Do you know what a “natural cause” of death is?  It’s sickness or disease.  It’s perfectly natural for the body to get a disease, or a sickness, and take our life.  This fella seems to think that he’s just going to die from “old age”, and not from a sickness, or a disease.

He’s deceiving himself isn’t he?  A person doesn’t die simply because they’re old.  If that was the case, we’d probably all die at exactly the same age.  A person dies because their body has become sick, or diseased.  Are we prone to more sickness and disease, as we get older?  Of course we are, because our bodies aren’t as strong as they were.

Now with sin, it should be exactly the opposite.  As we get older, our spirits should get stronger, not weaker, and consequently, we should sin less, than when we were younger.  That’s why the bible refers to “youthful lusts”, in  2 Timothy 2:22.   As we get older and more mature spiritually, we usually gain more strength to RESIST  “youthful lusts”.

The phrase “nailed to the cross”, is a metaphor.  What do you think it means for something to be “nailed to the cross”?   God used that phrase once in His word.  It’s found in  Colossians 2, verse 14.  Here’s what it says;  “Having blotted out the handwriting of the decrees against us, which was adverse to us, He has taken it out of the way, having nailed it to the cross.”

Hebrews 7:18  says that the old law was “nullified, abrogated” which means it was done away with.  It was no longer in effect, it was taken out of the way, it was blotted out.

When Jesus died on the cross, were our sins blotted out?  Were they taken out of the way, and nullified, and abrogated, done away with?  Because if they were, then you’ve got nothing to worry about.  All our preaching about believing, and repenting and being baptized, and all that stuff, is a bunch of bologna, because your sins were completely done away with, even before you were born.

That’s not true is it?  Our sins weren’t “nailed to the cross” where they?  Our sin is present, it’s a part of our fleshly nature.  “If we say we have no sin, we deceive ourselves, and the truth is not in us.”  How thankful we should be, every day of our lives, for the gift of Jesus Christ, so that we can be forgiven of the sin that accompanies us, as we live here on the earth.

Do you see what a dangerous doctrine that is, to teach other people that their sins were “nailed to the cross”.  That your sins have already been taken out of the way.  That there is nothing you need to do, to have eternal life, when this life is over.  What could possibly be any more dangerous, except for maybe teaching someone that there is no God, or that there is no Jesus Christ?

Do you know what people so often tend to do?  They tend to go to extremes.  One person will go to one extreme, and another person will go to the opposite extreme.  For example, here’s what one person said pertaining to the Christian, and to sin.  These aren’t his exact words, but this is the gist of what he said;  “I can’t imagine not having the blood of Christ to continually cleanse my sins.”

So there’s the one extreme, that you need constant cleansing.  And I sure hope that would never be the case with a Christian.  That they would have fallen so far from God, that they would need to be forgiven constantly.

But here’s the other extreme.  I was actually talking with a guy this past week, who actually claims that he never sins.  And that’s exactly the attitude that God speaks of in  1 John 1:8;  “If we say we have no sin, we deceive ourselves..”   This fella just can’t seem to accept that verse, without going to extremes.  He thinks that if that were true, that we HAVE sin, then we would always be in sin.  But as I explained, that’s NOT what God is saying.

It was the apostle John who wrote that we do have sin.  But that of we confess our sins, God will be faithful and righteous to forgive us our sins.  John wrote in  1 John 2:1 & 2;  “My little children, I am writing these things to you, so that you do not sin.  And WHEN anyone sins, we have an advocate with the Father, Jesus Christ the righteous.”

Most bible versions actually say; “And IF anyone sins..”  But the proper translation really is; “When anyone sins.”  It’s not a matter of IF we sin, it’s just a matter of WHEN we sin.  Is it a definite fact, without a doubt, that you will sin again in your lifetime?  No it isn’t.  There’s always the chance that we won’t live long enough to sin again.

But if God allows us to live, will we sin?  Yes we will.  Will it be today, or tomorrow, or the next day?  I don’t know.  That depends on how strong each of us can be, when it comes to temptation and trial.

Let me just leave you with these words from the scriptures.  We’re told in  Romans 6:10 thru 14;  “For the death that he died, He died to sin, once for all.  But the life that He lives, He lives to God.  Even so, consider yourselves to be dead to sin, but alive to god, in Christ Jesus.  Therefore, do not let sin reign in your mortal body, that you should obey it’s lusts.”

“And do not go on presenting the members of your body to sin, instruments of unrighteousness.  But present yourselves to God, as those alive from the dead, and your members, instruments of righteousness to God.  For sin shall not be master over you, for you are not under law, but under grace.”

Believe in God, and in Jesus Christ, and obey the word of God.  That’s what we need to do.