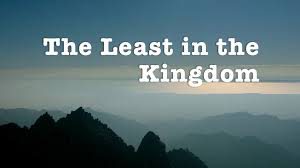 Are You One of the Least?

Have you ever felt insignificant?  Like maybe you’re not as important, or as valuable as other people?  If you have ever felt like that, don’t!  Don’t ever feel like that.  Because there’s no one, more valuable than you.  Do you know why Jesus said, in  Luke 15:7;  “..there will be more joy in heaven over one sinner who repents, than over ninety-nine persons who need no repentance”?  It’s because the lost are just as valuable as the saved!   And when one who was lost becomes saved, there’s rejoicing in heaven, and in the kingdom of heaven, which is the church.

When Jesus said in  Mathew 6:26;   “Consider the birds of the air, that they do not sow, nor do they reap..  But yet your heavenly Father feeds them..”  He was comparing the rather insignificant value of the birds, with the great value of you and I.  Jesus said;  “Are you not worth much more than they?”

There’s a story in the bible about a man who was the “least” in a couple of different ways.  Remember Zaccheus, the Jewish tax-collector who climbed up in a tree to see Jesus, because, as  Luke 19:3  says;  “He was small in stature.”  Because he was one of the least in height, he had to work a little harder to see Jesus.  But even though he was small in stature, Jesus still saw him, and Jesus acknowledged him.  No one is too small, or too unimportant, for the Lord to not notice them, and to not acknowledge them.

Jesus said to Zaccheus, in  Luke 19, verse 5;  “Zaccheus, hurry and come down, for today I must stay at your house.”   Little Zaccheus was important to Jesus.  There was a big crowd of Jews there also, and it says in  verse 7;  “And when they saw it, they all grumbled saying;  He has gone to be the guest of a man who is a sinner.”   So Zaccheus wasn’t only small in stature, but he was also small in the eyes of the Jews.  But again, he wasn’t too small for God, and he wasn’t too small for salvation, because  Jesus said in  verses 9 & 10;  “Today salvation has come to this house, because he too is a son of Abraham.  For the Son of Man has come to seek and to save that which was lost.”

Zaccheus was a Jew;  Jesus said;  “He too is a son of Abraham.”  But the rest of the Jews didn’t him as their brother, because he worked for the Roman government as a tax-gatherer.  They didn’t consider him as one of their own.  And they viewed him as a sinner.  Of course they were all sinners, they just weren’t “big enough” to admit it.  So Zaccheus was small in their eyes, they definitely thought he was one of the “least”.

Do you know what Jesus said about those who are the “least”?  He said in  Luke 9:48;  “For he who is least among you, this is the one who is great.”  Strange isn’t it?  We don’t see things the way God sees them do we?  Do you ever look down on yourself, as if you’re not as important as someone else.  Don’t ever do that.  And don’t ever look down on someone else, as if they’re not as important as you.

Do you remember the lessons that Joe Ruiz had for us while he was visiting here?  One of them was about seeing things through God’s eyes?  We need to start seeing other people, the way God sees them.  Another lesson Joe had for us was about John the Baptist.  And one of the verses he quoted concerning John,  was  Mathew 11:11.  Here what it says;  “Truly I say to you;  Among those born of women, there has not arisen any greater than John the baptist.  Yet, he who is least in the kingdom, is greater than he.”

Why did Jesus say that?  Why is the least in the kingdom, greater than the greatest prophet that ever lived?  (That’s not counting Jesus of course)

Here’s why.  Jesus said;  “Among those ‘born of women’, there has not arisen any greater than John the baptist..”   John was born of a woman, meaning he was a physical man.  But even the least in the kingdom of God, is born of the Spirit of God!  Jesus is contrasting the physical, with the spiritual.  Those who are born of women, are physical, but even the greatest physical man or woman that ever lived, is nothing, compared to a spiritual man or woman, born of God.

The physical, and the spiritual;  How we need to understand the difference. And how we need to understand the value, of things spiritual!  And the value of a soul.  You are a soul, a living being.  You don’t have a soul, you ARE a soul.  You are the greatest of all God’s creations;  Your body is only dust from the earth, but YOU are an eternal spirit from heaven.   So then think about who you really are.  Don’t worry about what you’re not, in this life, but rejoice over what you are, in spirit.

Verse 21  says;  “For where your treasure is, there will your heart be also.”  You don’t have to own a single thing in this world, to have treasures stored up for yourself in heaven.  As a matter of fact, the greatest person who ever walked the earth, someone even greater than John, owned absolutely nothing.  That was Jesus Christ.  Jesus said, in  Luke 9:58;  “..The foxes have holes, and the birds of the sky have nests, but the Son of Man has nowhere to lay His head.”  Jesus owned nothing, except maybe the clothes that He wore.   Was Jesus one of the “least” in this world?  I guess He was.  But even if He was the “least”, He was still the greatest.

“For where your treasure is, there will your heart be also.”    That’s why Jesus said in  Mathew 6:33;  “But seek FIRST the kingdom of God, and His righteousness..”

Listen to this verse,  James 1:9 & 10;  “But let the brother of low degree, rejoice in that he is exalted, and the rich, that he is made low, because like the flower of the grass, he will pass away.”

That verse is contrasting, the spiritual and the physical.

But the person who is “rich”, and the word “rich” there, IS talking about being rich with the provisions of this world.  And there’s nothing wrong with being rich.  God made Job rich, more than once.  And He blessed Abraham with abundant riches.  But this verse is talking about fixing your hopes on your riches.  Let the person who has this world’s riches, and fixes their hopes on them, glory in his humiliation, because all those riches are going to wither and die, just like the flower of the grass, and he’s going to be humiliated because he won’t have anything left!

Let the brother who is humble in spirit, glory, because God has exalted him.  But all the rich man has to glory about, is the humiliation that will come, when all his riches decay, and vanish.  Then what’s going to save him?

So then, it CAN be a blessing from God to be rich.  Consider Job again;  It says in  Job 1:10;  “Hast Thou not made a hedge about him and his house, and all that he has, on every side?  Thou hast blessed the work of his hands, and his possessions have increased in the land.”

But, it might just be a greater blessing, not a smaller blessing, to have little.  Do you remember what Jesus said about the poor widow who had very little?   She had put two small coins into the treasury, and Jesus said, in  Luke 21:3 & 4;  “Truly I say to you, this poor widow put in MORE, than all.  For they all, out of their surplus, put into the offering, but she, out of her poverty, put in all the living that she had.”

And Jesus said in  Luke 18:29?  “Truly I say to you, there is no one, who has left house, or wife, or brothers, or parents, or children, for the sake of the kingdom of God, who shall not receive many times as much at this time, and in the age to come,  eternal life.”   That widow didn’t have all those things, but what she did have, she gave it to God.

Jesus said;  “The last shall be first”, “The least shall be the greatest”, and “The one who humbles himself shall be exalted”, and the least in the kingdom, is greater than the greatest on this earth.

God said, in  Isaiah 55, verse 9;  “For as the heavens are higher than the earth, so are My ways higher than your ways, and My thoughts than your thoughts.”   And that’s because God’s ways, are spiritual ways, and God’s thoughts are spiritual thoughts.  And that’s exactly what our ways and thoughts need to be.  We need to be led by the Spirit, and not the flesh, just like we’re told in  Galatians 5:16.

Jesus said in  Mathew 13:31 & 32;  “The kingdom of heaven is like a mustard seed, which a man took and sowed in his field.  And this is smaller than all seeds, but when it is full grown, it is larger than the garden plants, and becomes a tree, so that the birds of the air come and nest in it’s branches.”

Here’s what the prophet Daniel said about Christ’s kingdom, in  Daniel 2:44;  “And in the days of those kings, the God of heaven will set up a kingdom, which will not be destroyed, and that kingdom will not be left for another people.  It will crush and put an end to all these kingdoms, but itself will endure forever.”

That sounds like a pretty great kingdom doesn’t it?  And you can be a part of it.   Even if you think of yourself as being “insignificant”, in this world, you will be great in the kingdom.  But your greatness has to begin with being humble.  Being humble enough to believe that Jesus is your King, and your Master, and your Lord.  “If you believe not that I am He, you will die in your sins.”  That’s what Jesus said in  John 8:24.

And you’ve got to be humble enough to repent of your sins.  You and I, and everyone hearing this, have all got sins, and we need to turn away from them.  “Unless you repent, you will all likewise perish.”  That’s what Jesus said, in  Luke 13:3.

Are you’ve got to be humble enough to simply say out loud;  Jesus is the Christ, the Son of God”?  And you’ve to be brave enough to say it, when it’s not the popular thing to say?  “If you deny Me before men, I will deny you before My Father who is in heaven.”  That’s what Jesus said in  Mathew 10:33.   But if we confess Him, well, then He’ll confess us, before our Father in heaven.  That’s what he said in  verse 32.

Are you humble enough to allow yourself to be immersed in water, “buried in baptism”?  That’s what the bible calls it in  Romans 6:4.  “Therefore we have been buried with Him, through baptism, into death, in order that as Christ was raised from the dead, by the glory of the Father, so we too might walk in newness of life.”   Jesus said you’ve got to do it;  “He who believes and is baptized shall be saved..”  He said, in  Mark 16:16.

Isn’t that the least, that you can do for God, considering the great things He’s done for you?

We’re going to sing our invitational song now, “To God be the Glory”.  (#238)  And as we sing, think about what you need to be doing, to be great in the kingdom of God.   What are you humble enough to do for God, so that he can make you great in His kingdom?