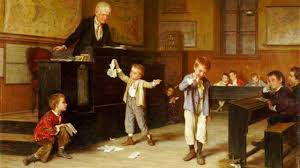 The Schoolmaster That Led To Christ.

Last week’s lesson ended with  Galatians 3:24,  which says;  “Wherefore the law was our schoolmaster to bring us unto Christ, that we might be justified by faith.”   The word “schoolmaster”, as it’s used here in this verse, doesn’t specifically mean a teacher, but rather, it refers to one who is in charge of the total oversight of someone, or of a group of people.  So then the “schoolmaster’s” job was more of an overseer, or a guardian, as well as a teacher.  And so the purpose of the law of Moses was really to be a “guardian” over Israel.

Galatians 3:19  told us that the law was added because of transgressions, or in other words, because of sin.  But as we studied last week, the law wasn’t added to bring forgiveness of sin, because it wasn’t capable of doing that.  “It is impossible for the blood of bulls and goats to take away sins.”  (Hebrews 10:4)

So then what did the law have to do with sin? It was added because of man’s inclination to sin, and his lack of knowledge of what sin is.  The law of Moses served as a temporary “schoolmaster, or overseer, or guardian”, so that at a later time, Israel could have salvation made possible to them.  We don’t know exactly why God has selected certain times, for certain things to be done.  But God did say in  Ecclesiastes 3:1;  “There is an appointed time for everything.  And a time for every purpose under heaven.”  And God said in  Galatians 4:4;  “But when the fulness of time came, God sent forth His Son, born of a woman, born under the law.”  And the law was the “schoolmaster” of the people, until that time came.

But it’s interesting to listen to the bible, and see exactly HOW the law of Moses served as this schoolmaster, or this guardian”.  The law definitely taught the people about sin, that’s certainly a part of it.  But the third and fourth chapters of Galatians tell about something else that the law did.

Chapter 3, verse 18  says;  “For if the inheritance is based on law, it is no longer based on a promise.  But God has granted it to Abraham by means of a promise.”  So we have the promise, and we have the law.  Now listen to  verse 21;  “Is the law contrary to the promises of God?  May it never be!  For if a law had been given which was able to impart life, then righteousness would indeed have been based on law.”

So then again, we have it right from God, that the law of Moses could not impart life.  Nothing within the law could accommodate for the forgiveness of sins.   Verse 22  tells us that the law accomplished the exact opposite of forgiving sins, and imparting life.  Listen to what it says;  “But the scripture, has enclosed every one under sin, that the promise might be given to those who believe.”

Now just to be sure that we understand that verse perfectly, let me define a few things.  The word “scripture” in this verse, refers specifically to the law of Moses.  The previous verse had said;  “For if a law had been given which was able to impart life, then righteousness would indeed have been based on law.  But the scripture.. (in other words, “..but the law which WAS given”, the law of Moses) ..has enclosed everyone under sin.”  So instead of bringing forgiveness of sin, and instead of imparting life, the law of Moses “enclosed” people, or “imprisoned the people” under the power and authority of sin.

The KJV says that the scripture has “concluded all under sin”.   To “conclude” means to come to the end result;  It’s like when a jury concludes it’s deliberations.  The deliberations have ended, and a verdict is the result.  And so the conclusion that resulted, when the law of Moses was given, was that every one, every individual, to whom that law was given to, was “enclosed” under sin;  “Imprisoned” in sin.

That’s exactly what the apostle Paul was explaining in  Romans 7, verses 7 thru 11.   Here’s what he said;  “What shall we say then, is the law sin?  May it never be!  On the contrary, I would not have come to know sin, except through the law.  For, (in other words, for example) I would not have been conscious of covetousness, if the law had not said; Thou shall not covet.”  So here Paul is talking about the law teaching them about sin.  And then he goes on;

Now going back to what Paul said about “sin taking opportunity through the commandment”, he said in Romans 7, verse 8;  “For apart from law, sin is dead.”  Now that’s a clear reference back to  Romans 5:13,  where Paul said;  “..But sin is not imputed, when there is no law.”   Sin is still there, even when no law has been given.  But when there’s no law given, the sin that’s present is dead, and it has no effect on the one sinning.  That sin isn’t imputed, it’s not counted against anyone, because there’s no law to even tell you what sin is.

Paul said, the only way he even knew about sin, was through the law.  So therefore, when the law of Moses was given, and everyone could see what sin was, it then “enclosed” everyone in sin, because everyone was guilty of sin.  And that’s exactly the same as what Paul said  Romans 5, verse 12, when he said;  “Therefore, just as through one man, sin entered into the world, and death through sin;  And so death spread to all men, because all have sinned.”

Going back to  Galatians 3, verse 22;  “But the scripture has enclosed every one (it enclosed every individual) under sin, so that the promise by faith in Jesus Christ, might be given to those individuals who believe.”  Every individual became imprisoned in sin, they were all in the very same condition, and God kept them in that condition, so that he could save only those individuals who would believe in His Son Jesus Christ.  That is what the law of Moses accomplished.  It made sure that anyone who was saved, would be saved by faith.

God kind of sums it up, in  verses 23 thru 29;  “But before faith came, we were kept under the law..  (the real meaning here is to be guarded, as if by a military guard)  ..we were kept in custody under the law, locked up, until the faith was later revealed.  Therefore, the law has become our schoolmaster (or our guardian) to bring us to Christ, that we might be justified by faith.  But now that faith has come, we are no longer under a schoolmaster.  For you are all sons of God, through faith in Jesus Christ.”

Now I want to make sure that you caught what was said there.  The law, the law in it’s entirety, the one and only law that God gave to Israel, the “schoolmaster” so to speak, is what kept the people in custody.  And remember what “in custody” means.  It means they were “enclosed under sin”.  “Imprisoned in sin”,  in custody.  So then the old covenant law, kept the people in custody, and locked up, UNTIL the faith was later revealed.  Faith in Christ that is.  Now listen;  “But now that faith has come, (now that Christ has come) we are no longer under a schoolmaster.”

There is nothing in the scriptures that would suggest only a partial removal of the old covenant law.  Now I want to point out something that I’ve pointed out several times before.  The new testament scriptures speak of “the” law.  It doesn’t say, one of the laws, or some of the laws, but it says “the law”.  The term “the law” is talking about a law in it’s entirety.  Do you remember what I’ve pointed out several times, about the Greek language, and it’s use of the word “the” in front of noun?  It doesn’t matter if the scripture is talking about “the God and Father”, or “the Christ”, or “the Holy Spirit”, or “the paradise of God”, or “the faith” once delivered for all, or “the first day of the week”, or “THE LAW”.  The word “the” means, that it’s “THE one and only one!

Galatians 3:24  is talking about “The law”, the one and only law that God gave to Israel.  And that law was likened to a schoolmaster, which kept the people in custody, UNTIL faith in Christ was revealed!   Then, after salvation by faith in Christ had been revealed, “THE law” no longer kept the people in custody.  Which people?  “The people” who “the law” was given to.  “The people” was “the nation of Israel”  How many nations of Israel were there?  There was one.  And that one nation of people, was released from the custody of that one law, which served as a schoolmaster.