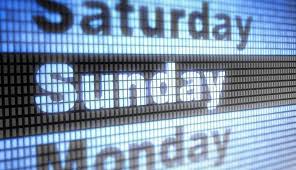 Other Days Of The Week

Let’s deal with the question of whether or not it’s acceptable to God, to partake of the Lord’s supper, on a day other than the first day of the week?  In our previous lesson, we saw clearly from the bible, that God has instructed us, through command and example, to come together on the first day of the week, for the purpose of partaking of the Lord’s supper.  (click here to see that lesson)  But after we do that, is it OK to do it again on other days of the week?

A discussion was being had about the practice of celebrating “Ash Wednesday”, and here is one man’s comment:

Now, what that man is suggesting, is that just because nothing is written in the bible, about “Ash Wednesday”, that doesn’t mean it wasn’t practiced as a religious celebration.  Of course, what the man no doubt isn’t aware of, is the fact that “Ash Wednesday” was originated during the council of Nicaea, in the year 325 AD.  The supposed goal of “Ash Wednesday” was an attempt by the Roman emperor Constantine, to unite pagans and Christians, within the Roman Empire, into one acceptable religion.

And so the truth is, that the celebration of “Ash Wednesday” is a pagan celebration, which ahs absolutely nothing to do with actual Christianity.

However, what that man said, about not everything that has ever happened, has been written in the bible, is perfectly true. That’s exactly what we’re told in  John 21, verse 25;  “And there are also many other things which Jesus did, which if every one of them had been written, I suppose the world itself would not have the space for the books to be written.”

But even though the bible says almost exactly the same thing as that man said, the bible said it for a completely different reason.  The point that the bible is making is summed up in  John 20, verses 30 & 31;  “Many other signs therefore, Jesus also performed in the presence of His disciples, which are not written in this book.  But these have been written, that you may believe that Jesus is the Christ, the Son of God, and that believing, you may have life in His name.”

And that’s in complete agreement with what we’re told in  2 Peter 1, verse 3,  which says;  “Seeing that His divine power has granted to us EVERYTHING, pertaining to life and godliness, through the true knowledge of Him who called us by His own glory and excellence.”

Therefore, if it’s not written on the bible, it doesn’t pertain to our spiritual life, or our godliness.  That is a necessary conclusion.  Peter wrote that EVERYTHING, pertaining to life and godliness, has been granted to us, through one specific means. And the “means” by which everything is granted to us, is “through the true knowledge of Him who called us..”  And of course, the true knowledge of God, and the knowledge of God’s will, comes from only one source.  And that source is the bible.

Therefore, once again, if it’s not written in the bible, it’s does not pertain to our spiritual life, or to our godliness. Another way of saying that, would be;  If it’s not written in the bible, then it is vain, to participate in it.  Where does that leave “Ash Wednesday”?  It leaves it within the category of vanity.  And it’s useless when it comes our spiritual life and our godliness.

What about the practice of playing musical instruments in our worship?  What category does that fall under?  Here’s the simple way to tell;  If it’s mentioned in the scriptures, then it’s a part of everything else, which pertains to life and godliness.  But if it’s not mentioned in the scriptures, then it’s vanity, and it’s useless.
The reality is, that these things which are not mentioned by God, in the bible, but which are practiced by men, (and women) are “doctrines of men”.

And that’s exactly what Jesus said in  Mathew 15, verse 6;  “This people honors Me with their lips, but their heart is far from Me. But in vain do they worship Me, teaching as doctrines, the precepts of men.”  And Jesus was actually quoting an old testament scripture, from  Isaiah 29:13.  And so it’s not a new thing.  People have always been doing that. they always want to do what THEY think would please God, instead of doing what GOD says would please Him.

If it’s not found written in God’s book, then it’s a “precept of men”, and it’s vain!  I’m going to go ahead and read the verse from  Isaiah 29:13;  “Therefore said the Lord; Because as this people draws near with their mouths, and honors Me with their lips, their hearts are far removed from Me; And their reverence of Me, is by commandments taught by men.”

Since that has always been a principle taught by God, wouldn’t that principle apply to all aspects of our conduct in life?  And wouldn’t it specifically apply to our conduct in worship?  Assuming that you agree with that, let’s go ahead and answer the question that we began with..

So then, would the practice of taking the Lord’s supper on some other day, be from God or from man?  Well, the practice would obviously be from man, since God hasn’t mentioned it.  Therefore, if it’s not in the bible, then it’s not from God, and it’s a vain practice, which is of no benefit to our spiritual life or to our godliness.  The question should be;  Why would anyone want to take the Lord’s supper on a day other than the first day of the week?  If it’s of no value, why would you want to do it in the first place?

Suppose you’ve missed partaking of the Lord’s supper on the first day of the week, for whatever the reason may be, you didn’t do it.  You can’t fulfill a “first day” responsibility, on a different day.  And if it’s vain to do it on any other day, then why would anyone want to do it?   Do you see how it’s only when man starts to legislate his own beliefs, and his own precepts, that things like this are done?  If your religion is to please yourself, then your religion is vain anyhow.  And if your religion is to please God, then all you need to do, is practice God’s precepts.  It just depends who you’re trying to please.  And  Acts 5:29;  “..We must obey God rather than men.”

Is It Sinful, To Practice the “Precepts of Men”?

Aside from the fact that practicing things as a matter of religion, and as a matter of worship, is vain and useless, we still need to ask ourselves this question;  If we choose to take part in these vain practices of men, will we be sinning?  And then if the answer is yes, we would be sinning, we’d have to ask ourselves;  If we continue to practice these things, even though they may be sinful, will we lose our salvation as a result?  These are some pretty important questions, that we better be willing to answer, because our eternal destiny might be at stake.

Now remember, it doesn’t make any difference which tradition, or practice, or precept we’re talking about.  If it’s not found in the bible, it’s a precept of men, and it’s vain, period.  That’s simply all there is to it.   Again, people always seem to want there to be more variables involved, and more factors to consider.  But the bible usually doesn’t give us a whole lot of factors to consider.

Like for example, if a “precept of men”, is something that you personally, really like.  And if it sounds like such a good idea;  That’s still not a factor in determining if a practice is of religious value, or if it’s a vain practice.  No matter how much we might “like” a particular precept or idea, or how much we might think it’s going to “help” the cause of Christ, if it’s not mentioned in the bile, it’s a vain practice.  It is simply NOT up to us, to determine what is “good”, or what is “helpful” in religion.  God has told us everything we need to know.

Ok, how do we find out, whether or not taking part in a vain religious practice, that is not found anywhere in the bible, and is consequently vain, is sinful for us?  Like everything else, we need to look to the bible, and see if it says anything about such a situation.  Does God tell us anything about whether these vain practices being sinful?

So then, what is a common verse that speaks about going beyond what is written in the bible?  Well, I’d have to say that  2 John, verse 9  is exactly such a verse.   This is probably a bit too plain for most people, because like I’ve said, people want there to be more variables to consider.  But anyhow, here’s the verse;  2 John, verse 9,  it begins with the word..  “Anyone..”  By the way, anyone means “anyone”.  It means every one, every kind, every part of the whole;  In other words, no exceptions!)  “Anyone going on ahead..”   That phrase “going on ahead” means that you are taking the lead.  We’re not supposed to be “taking the lead”,  when it comes to “following Christ”.   Christ is the shepherd, and we follow Him, we don’t lead Him.

We’re going to quit here for now, but I’ll ask you one more question;  When you leave God behind, and when you “do not have God” as the scripture says, are you then in a saved condition, or are you in a lost condition?

I’ll give you time to think about that, and we’ll continue next time.