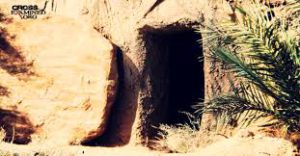 “Raised from the dead, through the glory of the Father”,  as it says in  Romans 6, verse 4.

Jesus was a Man whom God has appointed, “having furnished proof to all men, by raising Him from the dead.”  Acts 17, verse 31.

Acts 2:24  tells us;  “And God raised Him up again, putting an end to the agony of death, since it was impossible for Him to be held in it’s power.”

And  1 Corinthians 15, verse 17  tells us this;  “And if Christ has NOT been raised, your faith is worthless, you are still in your sins.”  And  verse 20  affirms;  “But now Christ HAS been raised from the dead, the first-fruits of those who are asleep.”

It had to be that way;  It couldn’t have been any other way.  Jesus Christ had to die, and He had to be raised from the dead.  There was no other way, that anyone, could be forgiven of their sins.  And so, because God “so loved the world, He gave His only begotten Son”,  to die for our sins.  And Jesus died.  And Jesus was resurrected, but He wasn’t resurrected on April 21st.

Now, listen to what I’m going to say;  When we assemble for worship, on the first day of every week, it has nothing to do with the fact, that Jesus was raised from the dead on that day, does it?  It’s merely “coincidental” that God has authorized our congregational worship, to be conducted on the same day, that Jesus was resurrected from the dead, right?

I really hope you’re wondering that right now, because I’m not saying that.  But I wanted to get you to think about it.

And what else do we honor, and commemorate on the first day of the week?  We commemorate the Lord’s death, as we partake of the Lord’s supper, on the Lord’s day, on the first day of the week, the day that He was resurrected from the dead.  Jesus said as He instructed His apostles to partake of the unleavened bread, which represents His body, and the fruit of the vine, which represents His blood;  “Do this in remembrance of Me”.  (Luke 22:19)   In other words, “commemorate My death”.

As a matter of fact,  1 Corinthians 11, verse 26  tells us;  “For as often as you eat this bread, and drink this cup, you proclaim the Lord’s death till He comes.”  Jesus didn’t say;  Oh just partake of this as often as you feel like it.  No, He said, every time you partake of it, which ought to be every first day of the week, just like Paul and the others did;  Every time you partake of it, you are proclaiming the Lord’s death, and you are commemorating His death.

Now the scriptures don’t tell us to “Remember the first day, to keep it holy”, like it told the Jews to do with the Seventh day of the week.  But rather, the scriptures tell us;  “And on the first day of the week, when we gathered together..”  Instead of giving us a command, God has given us an example.  And God has also given us a command, to follow His examples, which He has given to us in the scriptures.   For example, Jesus said in  John 13, verse 15;  “For I have given you an example, that you should do as I did to you.”

Now that particular example that Jesus spoke of, was an example of humility and servitude.  But we have many, many examples in the new testament, that we need to be following.  And one of those examples is worshipping God on the first day of the week, and commemorating Christ’s resurrection on that day.

Now you might want to know where the scripture is, that says that when we gather for worship, on the first day of the week, we are “commemorating” the resurrection of Christ.  Well, I can’t give you one specific verse that tells us that.  But what I can give you, is what I’ve already given you..

The death and resurrection of Jesus Christ, are commemorated EVERY first day of the week, when we assemble as we’re instructed to do.

But in addition to all of that, isn’t there one very special day of the year, that we should celebrate the risen Christ?  The answer is NO!  There is no other day, besides the first day of the week, in which God has authorized us to commemorate the resurrection of Christ.  Much of the world is celebrating Christ’s resurrection, today, on April 21st, in an extremely secularized fashion, which is completely and utterly, in disregard for the words of scripture.

Last year they celebrated it on April 1st.  Next year they’ll celebrate it on April 12th.  Did you know that when the “Gregorian” calendar, which our present day calendar is based upon, first came out, in 1582, and that the celebration of “Easter” was always held on March 21st?  The reason for that was the fact that march 21st marks the spring equinox.  But then people decided, (I have no idea which people decided this, I think they were Catholic people) but people decided that they would celebrate Christ’s resurrection on the first Sunday, after the first full moon, after the March 21st, spring equinox.  That sounds pretty reasonable I suppose.  I don’t know what in the world a full moon has to do with anything, but whatever.

It’s God’s will that all souls, would hear His word, and believe that Jesus is the Christ, the Son of the living God.  And that we would openly confess that faith.  Here’s what the bible says in  1 John 4, verses 2 & 3;  “By this you know the Spirit of god;  Every spirit that confesses that Jesus Christ has come in the flesh, is from God.  And every spirit that does not confess Jesus, is not from God.  And this is the spirit of the anti-Christ, of which you heard, that it is coming, and now it is already in the world.”

The invitation is yours, to do the will of God today, and every day.