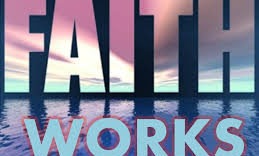 Faith or Works, or Both?

The title of this lesson is ” Justification By Faith, Perfected By works”.  But let me explain exactly what is meant by that..

The justification that God gives to a person, is because of their faith, which has been “perfected”, or “made complete”, through their works.  The word “works” simply refers to deeds that are done.  But I’m not talking about doing just any deeds.  I’m talking about doing the deeds which are done, in obedience to the words of God.  No word of God will ever be given to anyone, except for the words already given in the bible.

That is the claim that the bible itself makes.   The bible says, in  2 Peter 1, verses 2 & 3;  “Grace and peace be multiplied to you, in the knowledge of God, and of Jesus our Lord;  Seeing that His divine power has granted to us, everything pertaining to life and godliness, through the true knowledge of Him who called us through His own glory and excellence.”

Let me reverse that statement, and phrase it a little differently, just to make sure we totally understand it..

Listen to this verse;  Titus 2, verse 11;  “For the grace of God has appeared, bringing salvation to all men.”  (to all persons)

God’s “grace”, is God’s favor towards us.  It’s His kindness, and generosity, and it’s His love.  Galatians 5, verse 8  tells us;  “But God demonstrated His love for us, in that while we were yet sinners, Christ died for us.”   That’s pretty gracious, isn’t it?  Here we are, a bunch of sinners, and God’s grace provides Jesus Christ, to die for our sins!   “God’s grace truly has appeared, bringing salvation to all persons.”

No creed books of man, no “man-made” manuals of faith.  Just one “manual of faith”, the bible.  “Seeing that His divine power has granted to us EVERYTHING, pertaining to life and godliness, through the true KNOWLEDGE of Him who called us by His own glory and excellence.”

Grace Given, but not Received

Without the knowledge of God, which He has revealed to us in the bible, there is NO grace, nor peace, to be had, from God.  Without the knowledge of God, which He has supplied, the only blessings that anyone has, are the common, physical blessings, which come upon all persons.  Such as, the sun and the rain, and other things which nature itself supplies.   The bible says, in  Mathew 5:45;  “For He causes His sun to shine on the evil and the good, and sends rain on the just and the unjust.”

Those physical blessings are given to all people.  Of course, that doesn’t mean that all physical blessings will come upon all people.  For instance, there’s a lot of physical starvation that occurs in the world.  All people obviously don’t receive the physical blessing of enough food to eat.  But yet, God makes this statement, through His prophet, king David, in  Psalm 37, verse 25;  “I have been young, and now I am old, Yet I have not seen the righteous forsaken, or His descendants begging bread.”

That sounds to me, like a virtual “guarantee”, that if you will be faithful to God, and if you will be one of His “righteous ones”, that you will never have to worry about having enough to eat.  I read an estimate, that about 795 million people, or about 12.9 percent of the worlds population, are undernourished.  Many are literally starving to death!   But not God’s children.

But children, and adults, in various parts of the world, are starving, and we’re told that that’s a fact.  And if we couple that fact, along with the fact that the bible says;  “I have never seen the righteous forsaken, or His descendants begging bread”, we see how desperately, Christians need to get the word of God, to everyone alive!

We’re all familiar with  Romans 10:17,  which says;  “So then, faith comes by hearing the word of God.”  But you know, as well as I know, that “hearing” the word, implies “knowing” the word.  You don’t have to literally “hear” the word, you can “read” the word for yourself, and it will still produce the same faith, as if you “heard” someone else read it.

The point is;  You must KNOW the word, in order to acquire faith.  No one has faith simply because the word exists.  Faith comes by “knowing” the word of God!   And Jesus said in  John 8:32;  “..You shall know the truth, and the truth shall make you free.”  Jesus was talking bout being free from sin, wasn’t He?  Is that all there is to it?  Just “know” the truth, and you’re free from sin?

A lot of times, the bible uses one word, to represent something more detailed than the one word actually describes.  In grammar, that’s called a “synecdoche”.   It’s when a part of something, is used to represent the whole thing.  For example;  The phrase “all hands on deck”.  The word “hands” refers to the whole person.  You don’t want just their hands on deck, you want the whole person.

Whether or not we are eternally saved, depends on what we do with our knowledge.  You can have so much knowledge, that you can quote the bible, front to back, and still be lost.

Do you remember what I said in the beginning of this lesson?  “The justification that God gives to a person, is because of their faith, which has been “perfected”, or “made complete”, through their deeds.”

The “faith only” crowd, will always quote  Ephesians 2, verse 8 & 9;  “For by grace you have been saved, through faith, and not of yourselves, it is the gift of God.  Not as a result of works, that no one should boast.”

That’s pretty clear, isn’t it?  Our salvation is a “gift” from God.  Our salvation is not the result, of our own works.  It’s not the result of anything that we could do on our own.  Jesus once said, in  Mathew 19, verse 24;  “..It is easier for a camel to go through the eye of a needle, than for a rich man to enter the kingdom of heaven.”  And the disciples answered and said;  “Then who can be saved?”  And Jesus said;  “With men, it is impossible, but with God, all things are possible.”

So then, once again, our salvation, is not the result of anything that we could do on our own.  “With men, it is impossible..”   But with God, it’s a reality.  All we need to be saved, is knowledge of the truth, and the faith it produces, and the deeds which make that faith complete.

Faith doesn’t just believe, faith does!  If you believed that the ceiling right above your head was going to come crashing down, you’d probably move.  If you didn’t believe that was going to happen, you’d stay right there like you are.  It all depends on what you truly believe.

If you truly believed that Christ was coming today, you’d probably start praying right now!   And you might be doing a little repenting also.   But if you don’t believe that He’s coming today, you might just put off that repentance, for another day.

We’re told in  Genesis 22, verse 3,  that when Abraham was told by God, to offer his son Isaac as a burnt offering, that  “Abraham rose early in the morning and saddled his donkey, and took two of his young men with him, and Isaac his son, and he split wood for the burnt offering, and arose and went to the place of which God ahs told him.”

So then what I want you to understand clearly, is that it was because of what Abraham believed, that he was so willing to DO, what God had told him to do.   Do you remember what Jesus asked in  Luke 6:46?   “Why do you call Me Lord, Lord, and do not DO what I say?”

Why would anyone call Jesus their “Lord”, and not do what He tells them to do?  Well, it’s because they really don’t believe in Jesus, and in what he says.  They don’t trust Him.  That’s why!   But you see, Abraham believed God, and he trusted God.  “He considered that God is able to raise men even from the dead.”   And so when God told him to offer Isaac, as a burnt offering, he did it!

Remember what it says in  Genesis 22:3?   “Abraham rose early in the morning..”  He got up early, and started to do what most people wouldn’t do in a million years, but Abraham  “rose early in the morning”,  to kill his son Isaac!   Because God told him to do it!  And Abraham believed that God would somehow, make it all work out!  That’s quite some faith, isn’t it?

And we sometimes struggle to have enough faith to do the simple things that God has told us to do!   Sometimes it’s hard to believe what little faith we actually have!   “O ye of little faith”, Jesus said, more than once, to His disciples.  You know He thinks the same thing of us sometimes, don’t you?  You know He does.

But when we do “muster” enough faith to actually DO, what God has told us to do, THEN, our faith is made complete!  Then our faith is reckoned to us, as righteousness!  That’s what the bible says about Abraham’s faith.

James 2, verses 22 & 23  tell us;  “You see that faith, was working with his works, and as a result of his works, faith was perfected..  (in other words, his faith was made complete)  ..And the scripture was fulfilled which says;  And Abraham believed God, and it was reckoned to him as righteousness, and he was called, the friend of God.”

What a tribute, to be called “the friend of God”!   I hope that we can be called God’s friends.  I hope that when we read what God tells us to do, that we’ll do it!  No questions asked, and no misgivings about it, but that we just “do it”!