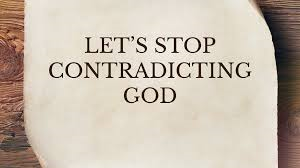 How Dare You Contradict God !

Imagine this;  Imagine you have a child, who comes home from school, and asks if they can go out and play.  (do kids still go out and play?)  But anyhow, they ask if they can go out, and you say;  No, not until your homework is done.  And as soon as you’re not looking, they sneak out of the house anyway.  And when they finally come back in, you look at them and say;  How dare you!

And then you tell them to sit down right here at this table, and do your homework, and don’t you dare get up until it’s done!  How dare you go against my word?

And so I was wondering if God ever feels like that;  How dare you go against My word!  How dare you question My authority, and contradict what I have said!  The scripture says;  “Woe unto him that striveth with his Maker!  A potsherd, among the potsherds of the earth.”   (Isaiah 45, verse 9)

You don’t contradict God and his word.  You don’t read the bible, and say, That’s not true, I’ll tell you what the truth is!

Would you do that?  Would you knowingly, directly contradict what God has said in the bible?  The bible says,  you’ve got to believe in Jesus Christ, in order to be saved;  Would you say;  No you don’t!

I suppose it really boils down to whether or not you believe, that the bible is the word of God.  Do you believe   2 Timothy 3:16 & 17;  “ALL scripture, is inspired by God..”  That means it’s God-breathed.  Every single scripture, God-breathed.

Do you believe  2 Peter 1, verse 21,  when it says;  “For no prophecy ever came by the will of man, but men spoke from God, being moved by the Holy Spirit.”   The words of the prophets, and the words of the writers of the bible,  didn’t come from THEIR minds, they came from the mind of God.

When you believe that the words of the bible, are truly the words of God, you tend to take them pretty seriously.  Do you believe what Jesus said, in  John 12, verse 48?   Here’s what He said;  “He that rejects Me, and receives NOT, My sayings, has one that judges him;  The words that I spoke, the same shall judge him in the last day.”  I believe it, do you?

If His words are going to judge us, then what do you think that judgment is gonna be, if we contradict those words?  Can you imagine, standing before the judgment seat of Christ..  We’ll all be there..  2 Corinthians 5, verse 10  says;  “For we must all be made manifest before the judgment seat of Christ, that each one may receive the things done in the body..  (we’ll receive the recompense)  according to what he hath done, whether it be good or bad.”

So then, can you imagine, standing before Christ on that day, and He looks at you and says;  How dare you contradict the word of God?

And we’ll have no excuse.  Because He’s telling us, right here in His word.  He might as well be saying, Don’t you dare go against My words, because “the words that I have spoken, the same shall judge you in the last day.”

But yet, so many people do, dare to contradict the words of God.  For example, people say;  Salvation is by faith alone.  That’s the exact opposite of what the bible says.  Did you know, there’s only one verse, in the entire bible, that uses the words, faith & alone, in the same verse?   Listen to  James 2, verse 24;  “You see that by works a man is justified, and NOT by faith alone.”  NOT by faith alone!  And people dare to contradict that.  And they’ll be judged by that.

I know what people say.  They say, look at  Ephesians 2, verses 8 & 9;  “For by grace have you been saved, through faith, and that not of yourselves, it is a gift from God.  Not of works, that no man should boast.”   And so people say;  You see there, saved by grace, through faith alone.

Justification; by Faith or Works?

James  says “..by works a man is justified..”,  and  Ephesians  says;  “Not of works..”  That confuses people.  But it’s not that hard to understand.  Ephesians is telling us that salvation does not come from ourselves.  It’s not the product of our deeds.  Salvation is offered by God, because of His grace, and it’s accepted by us, through our faith.

God’s grace is the “UN-merited” favor that He extends to us.  It’s a gift!  We don’t deserve it, and we can’t earn it.  But God offers it anyway.  And our faith, is our belief in God’s word, and our obedience to what that word tells us to do.  Obedience is what’s involved in the kind of faith, that saves us.

And that’s exactly what James is talking about when he speaks of being justified by works.  He’s talking about obeying God.   James 2:21  says;  “Was not Abraham our father, justified by works, when he offered up Isaac his son, upon the alter?”  The answer is, Yes he was.  He was justified when he obeyed the command of God, to offer up Isaac as a sacrifice.  It was a “work” of obedience.  Abraham wasn’t earning salvation, and he didn’t deserve it any more than you or I do.  Salvation will always be “a gift from God”.  But the scripture says, in  verse 22;  “You see that faith, was working with his works (with his obedience) and by works (by his obedience) faith was perfected.”

And thus the conclusion is made in  verse 24;  “You see that by works (works of obedience), a man is justified, and NOT by faith alone.”   Verse 26  says;  “For as the body, apart from the spirit, is dead;  Even so faith, apart from works, is dead.”

But here’s the real test of faith.  If you do misunderstand something, then when someone does explain the scriptures, in a very plain and straightforward manner, as I’ve done this morning, you’ve got to be willing to accept the word of God.  And sometimes that means you’ve got to change your beliefs, so that you DON’T contradict what the bible really says.  And that’s the tough part, changing.  But then, that’s where humility comes in.  If we will simply humble ourselves, God promises that He will exalt us.

It’s about “daring” to believe and obey, no matter what others say.

What about those who refuse to accept the Lord’s word concerning baptism, and dare to contradict Him on that subject?  What do people say about baptism?  Some people say that baptism is completely unnecessary.  Other people say that being baptized is one of the very first things you should do AFTER you become saved, usually by faith alone they say.

But what does the bible say?  What does God say?  Well, God has a lot to say.  For example; God says, in  1 Peter 3, verse 21;  “..Baptism doth also now save us.”  God says that baptism saves us!  Would you dare to say that baptism is unnecessary, when God says that it saves us!  Some people do.  And they’ll be judged it.  “By your words you shall be justified, and by your words you shall be condemned.”  (Mathew 12:37)

Baptism now saves us, but how does it save us?  Look at it this way..  What is the one thing that stands in the way of salvation?  Sin!  Sin is the ONLY thing that stands in the way. Isaiah 59: 1 & 2 says;  “Behold, Jehovah’s hand is not shortened, that it cannot save.  Neither is His ear heavy, that it cannot hear.  But your iniquities have separated, between you and your God.  And your sins have hid His face from you, so that He WILL NOT hear.”

If we were without sin, we’d all be saved, by virtue of our sinlessness. But Romans 3:23 says; “For all have sinned, and fall short of the glory of God.” So then sin, stands in our way, and we’ve got to get rid of it.

But how you gonna do that?  How are you gonna get rid of your sin?  Your sin has to be cleansed.  It has to be “washed away” so to speak.  It has to be forgiven. And how’s that gonna happen?  And when is that gonna happen? Is it gonna happen when you first come to believe that Jesus is the Christ?  No, the bible says that your sins are NOT going to be washed away, just because you believe in Jesus.  We’re told in James 2, verse 19; “The demons also believe, and tremble!”  So then, it’s literally impossible for belief alone to save one.  “The demons believe and tremble!”