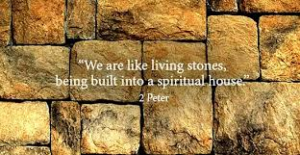 With God, things are quite different than they are with men.  With men, Christ was rejected, and the scripture says;  “Indeed rejected”  That’s like saying, Yes it’s sad but true;  Jesus Christ, the Son of the living God, was indeed rejected, by the very people He came to save.

John chapter 1, verse 10  says;  “He was in the world, and the world was made through Him, and the world knew Him not.”  The world didn’t know Him, they didn’t understand who He was, they couldn’t perceive who He was.  I believe that it was because they simply were not spiritually minded.  They were to preoccupied with fleshly things.

You know, I think we can have that same problem if we’re not careful.  Well, I know that we can get too “fleshly minded” sometimes.  And when that happens, it serves as an obstacle to understanding spiritual things.  That’s why the scriptures call Jesus, a “stumbling block”.  I’m sure that there’s several ways that people “stumble” over Christ, but one way for sure, is that they stumble over the spiritual nature of Christ, and the spiritual nature of His kingdom.

Worshipping in Spirit and in Truth

For example;  Consider when we assemble for worship.  What makes a worship assembly, “uplifting” to you?  Is it the sound of beautiful singing?  Is it a prayer that sounds like it’s “worded” just right?  For a lot of people, it’s a sermon, that says just what they want to hear.

The beautiful sound of singing, the flowing sound of a carefully worded prayer, and a sermon that truly “tickles” my ears.  The truth is, most people worship with a fleshly attitude.  Their purpose, in worshipping, is so they can  be made to “feel” good.

What’s wrong with feeling good, you might ask.  There’s nothing wrong with feeling good.  But it’s simply not the purpose for our worship.  But yet that’s exactly what most religious groups pattern their worship after, because that’s exactly what their members want!  And so, most “churches” are basically, a catering service, catering to your fleshly desires.  And the truth is, I really don’t think that I’m exaggerating.

We, as members of the Lord’s body, need to understand, that our worship is a spiritual activity.  The only thing fleshly about it, is the fact that it’s our fleshly bodies, that carry out the desires of our spirit, as we desire to obey, the pattern set forth by God.  “But the hour cometh, and now is, when true worshippers, shall worship the Father in spirit and in truth.  For such does the Father seek, to be His worshippers.  God is a Spirit, and those who worship Him, must worship in spirit and in truth.”   (John 4, verses 23 & 24)

But yet, people must think, that “those who worship God”, must worship in a way that appeals to the masses.  In a way that satisfies their fleshly desires.

Let All Things be Done for Edification

Our beginning verse,  1 Peter 2, verse 4,  says that you are coming to “a living stone, rejected by men..”   Why was Jesus rejected by men?  It was because Jesus didn’t cater to their fleshly desires, that’s why.  Instead, He provided for their spiritual needs, and that’s not what they were looking for.  And sadly, that’s not what most people today, are looking for either.

Our baptism is not referring back, to the fact that our sins are already forgiven, but rather, our baptism takes us forward, unto and into the forgiveness of our sins.  And likewise, our acts of worship, are not done, because we have already been edified, but rather, our acts of worship are to be done, so that we can move forward, unto, and into, the direction of being edified.

You know what the word edified means right?  It means to be built up, or strengthened, spiritually.  Spiritually!  It has nothing at all to do with anything physical.  You could be in the weakest physical condition of your life, and you could be deaf and unable to speak, but even in that condition, you can be edified.  Why?  Because edification has nothing to do with our physical condition, or with how we feel physically.  It is purely a spiritual thing.

And isn’t that really the beauty of worshipping God?  Our spirits can grow, and become stronger and stronger, even as our bodies get weaker and weaker.  Or even if we’ve reached the weakest physical point of our lives.  “Let all things be done, unto edifying.”

But do you know what the problem is?  Most people, even most Christians, don’t know what the meaning of edification is.  They think that edification is the emotional “high” that they get, when they attend a worship assembly with lots of people, so that they get the feeling that, I’m a part of something big here;  There’s really something going on.  And they think that edification is that emotional “high” they get, when they hear the sound of a room full, or a choir full of beautiful singers, singing,

But that’s not edification;  That’s entertainment.  Do you know HOW, you become edified during a worship assembly?  First of all, you can’t be edified, if your heart isn’t right.  If that entertainment is what you’re looking for, then edification is going to be impossible to achieve.  Because as I’ve already said, edification is purely spiritual.

I know He wouldn’t.  I know, that the instructions that the Lord has given us, are indeed the manner in which we will be edified, if indeed we are ever edified.  We simply will never be edified, by any other means, besides the means that God has provided for us, and instructed us to follow.

1 Peter 2, verses 4 & 5  say;  “Unto whom you are coming, a living stone, indeed rejected of men, but with God, elect and precious.  You also, as living stones, are being built up..  (you are being edified)  ..you are built up, a spiritual house, to be a holy priesthood, to offer up spiritual sacrifices, acceptable to God, through Jesus Christ.”

Remember back in  verse 2,  there is the reference to, “the pure spiritual milk”, referring to the pure and intrinsically good, and divine word of God?  Well, that is a different word than the one in this verse.  The one in this verse is making the clear distinction between the physical and the spiritual.

Christ is a spiritual stone;  We are spiritual stones;  Our service to God is spiritual service, not fleshly service.  And that is what Jesus meant when He said that they that worship God, must worship “in spirit and in truth”.   It’s our spirit that must be worshipping God, not just our bodies going through the motions.  And I’m sure that you know that.  But here’s something that occurred to me..

Considering the fact that it’s our spirits that must worship God, and that we are to be offering up spiritual sacrifices, which are the only kind that are acceptable to God,  Then that would be a very good way of describing the difference between the type of “works” that have no bearing on our salvation, and the type of “works” that must accompany our faith, in order for our faith to be perfected.

That’s seems to be so hard for people to understand.  But what if we explained it this way.  When our spirits are serving God, our bodies are simply being used as tools, as our spirit obeys God.  And so that obedience, is the result of our spirits serving God.  Our body is simply is simply doing the bidding of our spirit, and therefore those “spiritual” works, are what must accompany our faith.

And I’m sure that you remember the words of  Romans 12, verse 1,  which tell us to “present our bodies, a living sacrifice”,  (that would be a “spiritual sacrifice” we would become as “living stones”, as our bodies do the bidding of our spirits)   So then,  “Present your bodies, a living spiritual sacrifice, which is your spiritual service.”  And once again, the word spiritual in that verse means..  divine and intrinsically good.  So then, your spiritual service, is your obedience to the divine, and pure, and intrinsically good, word of God.

And here’s what it says in  verses 6 thru 8, of 1 Peter, chapter 2;  “Because it is contained in scripture;  Behold, I lay in Zion, a chief cornerstone, elect, precious;  And he that believeth on Him, shall not be put to shame.  For you therefore, that believe, is the preciousness.  But for such as disbelieve, the stone which the builder rejected.  The same was made the head of the corner.  And a stone of stumbling, and a rock of offense;  For they stumble at the word, being disobedient, whereas also they were appointed.”

Next week maybe we should talk just a little bit about how those who are disobedient, and stumble, were appointed for such.