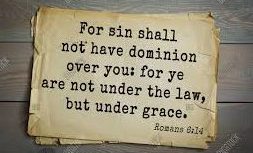 A verse that causes some confusion, is  Romans 6:14,  which says;  “For sin shall not have dominion over you;  For you are not under law, but under grace.”  Obviously “law” and “grace” are being contrasted here;  But there are two specific things, concerning “law” and “grace”, which are being addressed, and we need to understand what those two things are.

Now,  Romans 5, verse 13  makes a clear statement.  It says;  “..But sin is not imputed, where there is no law.”  “Imputed” means that you are held guilty of your sin.  So then, no law, no guilt of sin.  It’s that simple.  Therefore, in order for sin to have “dominion”, or control over you, you MUST, be living under the authority. of some kind of law, which commands you NOT to do, what you have done, or that commands you to DO, what you have not done.  That’s what a law does;  It either tells you to do certain things, or it tells you not to do certain things.

Do you see why it’s so important, to have ALL your sins forgiven, before death arrives?

Why is that?  Why are those who die in the Lord, blessed, even though they have broken the law?  Well, it’s because they don’t LIVE under the law;  They don’t live under the authority of the law.  The law does not have the “dominion” over them, even though the law is there to guide them, and even to regulate them.  Do you understand how this “plan of God” works?  God has given us laws, for the purpose of letting us know, what sin is.

It’s like Paul said in  Roman 7, verse 7;  “I would not have known sin, except through the law.”   The law teaches us what sin is.  And of course the other purpose of the law, besides to teach us what sin is, is to govern our behavior.  “..The way of man is not in himself.  It is not in man who walketh, to direct his own steps.”   Jeremiah 10:23.

Those who “die in the Lord”, have died under the “authority” of grace.  What does that mean?  Well, God’s grace, is God’s kindness, and God’s favor, and God’s mercy.  And because it’s GOD’S grace, it has authority.  God’s grace has the “authority” to dictate, that even though you have indeed transgressed the law which governs you, you will NOT be held guilty, because God’s grace is going to allow you to be forgiven.  And because of the forgiveness of your sins, “sin shall not have dominion over you;  For you are not under law, but under grace.”  Once again, if you are “in Christ”, you are not under the authority of the law, but rather, you are under the authority of God’s grace.