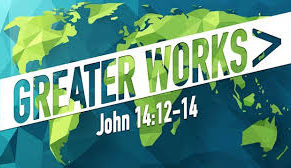 The Gospel Minutes, is a monthly religious paper that is put out by Clem Thurman and his nephew David Thurman.  They typically devote the majority of each edition to a bible lesson on the front and middle pages, and then the back page is devoted to answering questions that readers have submitted.   Here’s one of the questions that was recently submitted and answered..

“Dear David:  Will you please explain what Jesus meant by “greater works” in  John 14:12?   What greater works could be done than the miracles Jesus did?”

And here’s how David Thurman begins his answer..

“Let me put this verse in it’s full context..”  (and he quotes the words of Jesus, from  verses 11 thru 15)  “Believe Me, that I am in the Father, and the Father is in Me.  But if not, believe in Me because of the works themselves. Truly, truly, I say to you; He who believes in Me, the works that I do, he will do also, and greater works than these he will do, because I go to the Father.  Whatever you ask in My name, that will I do, so that the Father may be glorified in the Son.  If you ask Me anything in My name, I will do it.  If you love Me, you will keep My commandments.”

And now David continues with his answer..  He says;  “If you read closely, you will see no mention of miracles, only of works.  These works were the same behaviors and actions that they had seen in Jesus.”  So in other words, David is saying that Jesus is not referring to His miracles, when He speaks of His works.  He’s only referring to His everyday love and compassion that He showed to everyone, everyday.”

Now that makes sense doesn’t it?  We can’t do the miracles that Jesus did.  And so how could Jesus have been referring to His miracles, when He said  “..the works that I do, you will do also”.  Well, David has a good point there, but he’s overlooking something.

The fact of the matter is..  Jesus did do some simple good things for people, but the majority of the things that He did, were miraculous things!  He healed the sick..  People were literally, constantly bringing the sick to Him to heal.  He healed the blind, He healed the lame.  He cast out demons.  He even raised the dead on more than one occasion!  He turned water into wine.  He feed thousands of people, with a few fish and a few loaves of bread.  Miracles were common place when Jesus was there.  Miracles WERE His everyday ‘good works”.

And what was the specific purpose for those miracles?  Certainly Jesus had compassion of all the people, no matter what their problems were.  But there was an even greater purpose for the miracles of Jesus, than simply to heal people physically.  The apostle John tells us exactly what that reason was.  John wrote, in  John 20, verses 30 & 31;  “Many other signs (that means miracles) did Jesus, in the presence of the disciples, which are not written in this book.  But these are written, that you may believe that Jesus is the Christ, the Son of God, and that believing, you may have life in His name.”

Those miracles were performed, and they were written in that book, so that people would have the evidence, and the proof, that Jesus was indeed, God in the flesh;  The Son of the living God.  Jesus was without a doubt referring to His miraculous works, when he said..  “believe in Me because of the works themselves.”

But remember what the original question was?  “What greater works could be done than the miracles Jesus did?”

Jesus spoke personally to His apostles many, many times, and much of what He told them, applied to them alone, and not mecessarily to us, even though we can in most cases, still find a way to apply those words to us.

For example, in  Mathew 28, verse 19, Jesus gives what is commonly referred to as “the great commission”.  Here’s the literal wording of the first part of that verse;  “Having gone therefore, disciple all the nations..”  In other words,  ‘Having gone INTO all the nations..”

And  Mark 16, verse 15  says;  “Go therefore into all the world, and preach the gospel to the whole creation..”  In other words, preach the gospel in every nation, and to every person.   Those two commands were given specifically to the apostles.  They were the ones who were commissioned to go into all the know world.  We do not have that responsibility laid upon us, to go to every nation that there is.  But the apostles had that command given to them, and the bible says that they fulfilled that command!

Now we should all surely take those words to heart, each one of us individually, and preach the gospel to everyone we can.  But the specific commands were given only to the apostles of Jesus.

It’s just like  John 14, verse 26.   Here’s another verse, that applies only to the apostles, and not to all of mankind.  It’s the promise of Jesus, to send the Holy Spirit, to guide the apostles, after Jesus returned to heaven.  Here’s what he said;  “But the comforter, even the Holy Spirit, whom the Father will send in My name, He shall teach you all things, and bring to your remembrance all that I said unto you.”   That doesn’t directly teach us, like He directly taught the apostles.  And the Holy Spirit isn’t going to bring to our remembrance, everything that Jesus taught.  But He did do that for the apostles.

Greater In What Way ?

Now let’s look at  John 14, verse 12  again, and see why Jesus said that His apostles, would do even greater works that Jesus Himself did, while He was with them.

Verse 12  says;   “..  the works that I do, he will do also, and greater works than these, he will do, because I go to the Father.”   The reason that the apostles would do “greater works” than Jesus, was because Jesus was going to leave them, and g to the Father.  That is what Jesus said.  That’s the reason that Jesus gave, for the fact that His apostles, would do even greater works than He.  The apostles were charged with carrying on, and actually finishing the work that Jesus had begun.  And that work was in teaching and preaching the word of God, and in proving that their words were actually God’s words, through the attesting miracles which would accompany their preaching.

That’s the precise purpose for the miracles that Jesus performed..  to attest to the fact that He and His words, came from God.   And the apostles were charged with the exact same work.   But Jesus is saying, that when the apostles would perform those miracles, that it would be even greater than when He did them.  Why?  Why did Jesus say that?

I can think of two ways in which the miraculous works done by the apostles, might be considered to be “greater” than Christ’s works.   One way would be that the apostle’s works, would go on for a “greater” length of time.  The ministry of Jesus, lasted for only about three years.  But the works of the apostles would continue for decades.

And another way in which the apostle’s works might be considered to be “greater” is in regards to the sheer number of people who would witness the works.  The scope of ministry of Jesus, was actually very limited.  His geographical area of impact, was basically the area of Judea and Samaria.  But, the geographical area in which the apostles would be preaching the word, and performing their “attesting miracles” would be the entire know world!   Quite a difference.  And so, although the bible doesn’t specify exactly HOW the apostles would do even greater works, than Jesus Himself, I think these two factors alone, carry considerable weight.

Now maybe you can think of other ways, in which we might say that the apostle’s works would be even greater, and it would be interesting to hear some of your ideas on that.  So, maybe give that some thought, and share it with us some time.

Ask And Ye Shall Receive

And now I just want to say a little something about the next three verses;   Verses 13 thru 15.   Let me read them again;  “Whatever you ask in My name, that will I do, so that the Father may be glorified in the Son.  If you ask Me anything in My name, I will do it.  If you love Me, you will keep My commandments.”

Now we know that “in My name”, means “by My authority”, and so Jesus is promising that if He has given us His authority to pray for something, then that something would be granted to us, thereby glorifying the Father.  And John adds to that idea, in  1 John 5:14,  with these words;  “And this is the boldness which we have toward Him, that if we ask anything according to His will, he heareth us;  And if we know He heareth us whatsoever we ask, we know that we have the petitions which we have asked for.”

And so I really believe that we have to put these things together, and conclude that in order to be assured that God will grant us what we ask, we first must ask by His authority, and then we need to make sure that our asking is according to His will.   I don’t think that we can take the words of  John 14, verse 14,  separate from the words of  1 John 5, verse 14.

And then of course Jesus concludes the thought of asking “in My name” with His words in  verse 15,  which says;  “If you love Me, you will keep My commandments.”

And so maybe we need to take all three things into consideration when asking for something;  Ask by Jesus authority, and ask according to His will, and then make sure that even before you ask, that you are indeed, keeping His commandments.

So, a lot to think about there, in those few short verses.  And a lot to learn, and a lot to understand.

This article has 7 Comments