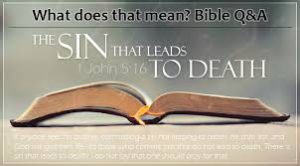 There Is A Sin Unto Death

Pray For One Another

God wants us to pray for one another.  He wants us to “band together”, and to He wants us to be united!  The apostle Paul wrote in  1 Corinthians 1, verse 10;  “Now I exhort you, (I beseech you) brethren, by the name of our Lord Jesus Christ, that you all agree and that there be no divisions among you, but that you be made complete, (that you be made whole)  in the same mind and in the same judgment.”   Band together, and be united!

Imagine if you would, all Christians, worldwide, all traveling UP the road, (not down the road, but UP the road) leading us to heaven.  And it can be a long road, and it can be bumpy at times, and we can get tired.  And sooner or later, every one of us, is going take a fall (we’re going to sin)  So, when someone falls down on that road, what do you do?  Do you just trample right over them, or do you kick them out of the way, so you can go on by?  No, you pick them up, and you get them back on their feet again, and you brush them off, and you strengthen them.  And if necessary, you might even carry them for a while.  Maybe a few of you together, can carry them for a while, until they get their strength back.  And with that help, maybe they can become stronger than they ever were before.  And then later on, who knows, they might be the very one to pick YOU up, or carry YOU!

God tells us to  “Confess your sins, to one another..”   When’s the last time you’ve done that?  Have you EVER done that?   I think we get the impression that our own sins, are too private, to be telling someone else about.  It’s just between us and God, right?  Well evidently, that’s not right.  Because God says;  “Confess your sins, one to another, and pray for one another, so that you may be healed.”  Healed of your sins.  Forgiven of your sins.

Isaiah 59, verse 2  tells us;  “But your iniquities, have made a separation between you and your God;  And your sins have hidden His face from you, so that He does not hear.”   All sin does that, any sin does that.  And we’ve got to believe it and accept it.   And it is God’s desire, that we all be united in that belief.  And if someone refuses to unite together in believing that truth, then that one also refuses to unite with God.

Have I “boxed God in”, by saying that?  Have I somehow limited the power of God, by repeating what He has already ordained, that “sin brings forth death”?   I certainly have not.  If anyone has “boxed in anyone else, it’s God, who has “boxed us in” and has limited us, to believing explicitly, everything that he has told us.

But “boxed in” isn’t even a proper way of saying it, because that’s not how God says it!  Actually God uses a different phrase, other than “boxed in”, to describe how He limits us, in what He wants us to believe.  God uses the phrase, “the straight and narrow way”.   And if we view that as a “limitation”, then we’re totally wrong.  Because God’s “straight and narrow way” is our path to freedom!  Freedom from sin, and from spiritual death!  God’s word has provided for us, a very straight path to heaven, even though, that path can in some ways be considered very narrow.  But the fact remains, that it is GOD, who has ordained the path, and it is US, who must stay on that path of faith, or be lost.

Now here’s foundational truth # 2, for us to acknowledge and believe;  Any sin CAN be forgiven.  Not every sin WILL be, but any sin CAN be forgiven.  And here are some scriptures that tell us that fact;  God tells us, as we just read, in  1 John 1, verse 9;  “If we confess our sins, He is faithful and righteous to forgive us our sins, and cleanse us of ALL unrighteousness.”

Which sin will God forgive and cleanse us of?  Which act of unrighteousness?  The scripture plainly says;  “ALL unrighteousness”   ALL sin, will be forgiven by God, and be cleansed from our very being, from our very soul, IF we confess that sin!  And put an exclamation point there, because that is an unchangeable fact!

ALL unrighteousness (which is sin) can be forgiven, if we confess that sin to God.  And don’t forget, that God wants us to confess our sins to one another also.  It’s simply a part of His plan, and of His will, but I don’t know that we really do that.   When is the last time that you confessed a sin to someone else?

You husbands, and you wives, you certainly need to be confessing your sins to one another.  How much closer can any two people be, other than two people who have become one flesh?   But what about the rest of you who don’t have a husband or a wife, to confess your sins to?  Who are you going to confess them to?  I can’t give you that answer, but what I can say, is that obviously, God wants you to be close enough to someone, so that you indeed can, and will, confess your sins to that person.

I don;t know that I’ve ever heard this preached so plainly, but that’s how plainly that God says it.  ““Confess your sins, one to another, and PRAY for one another, so that you may be healed.”

And of course we know from several other scriptures, that confession, especially confession to God, implies repentance of the sin that you are confessing.  “Unless you repent, (Jesus so plainly said)  you shall all likewise perish.”  Luke 13:3.   And..“..He has now commanded, that all men, everywhere, should repent.”   Acts 17:30

Confession would be of absolutely no value, without repentance, along with it.

1 John 2:1 & 2  says;  “If any man sins, we have an advocate with the Father, Jesus Christ the righteous.  And He is the propitiation for our sins, and not for ours only, but for the sins of the whole world.”      Jesus is the propitiation, and that means that He is the remedy, or the appeasement, or the atonement, of ALL sin, and of EVERY sin, and of ANY sin.   Any sin CAN and WILL be forgiven, if we acknowledge it, and confess it, and repent of it..   Any sin!

NO sin, is unto death, if we handle it properly.  That is the blessing of Jesus Christ.  He is the remedy for it all.  Obedience to the commands of Christ, to confess and repent of our sins, is the ONLY way, to be forgiven of our sins.  Remember, “..He became the SOURCE of salvation, to all those who obey Him.”  Hebrews 5:9.

Oh, we’re not forgetting, that for the non-Christian, a burial in water, (a baptism) is required for “first time” forgiveness.  But for the Christian, who has already been baptized “into” Christ, and into His kingdom, confession and repentance of sins, are the God ordained methods of receiving the forgiveness of sins.  No other methods exist.

Now, have I now limited the power of God?  Have I now “boxed him in”?  I certainly have not.  I have preached unto you the GOSPEL, the “good news” of how to be forgiven of sins.   And let me just quote here, from  Romans 1:16;  “For I am not ashamed of the gospel, for it is the power of God for salvation, to everyone who believes, to the Jew first and also to the Greek.”

People ask;  What about the blasphemy of the Holy Spirit?  If ALL sin can be forgiven, then why does the bible say that THAT sin can’t be forgiven?   Jesus said, in  Mathew 12, verse 31;  “Therefore I say to you, any sin and blasphemy shall be forgiven people.”  You see, that’s what I’ve been saying;  ANY sin shall be forgiven, IF we handle it properly, if we rely on the remedy!   “..But, blasphemy against the Spirit shall NOT be forgiven.”

So why is that sin so different?  Why is there no forgiveness of that?   Verse  32  says;  “..neither in this world, nor in the world to come.”   Why no forgiveness, ever?   Well, quite simply put;  Blasphemy of the Holy Spirit, the Spirit who gave us the remedy for sin;  Blasphemy of the Holy Spirit, completely REMOVES, the acknowledgment, and confession, and repentance of sin, right out of the picture;  Thereby removing, the only remedy for sin, and leaving us with the fact, that ALL sin is unto death!

I suppose you’ve got to understand what “blasphemy of the Holy Spirit” is.   Remember, it’s the Holy Spirit, who gives us the remedy for sin.  “Blasphemy”..  “slander, abusive or scurrilous language.”   Blasphemy.. “switches” right for wrong, and wrong for right.  (I’m reading from a word study here)  It calls what God disapproves, “right“, which “exchanges the truth of God for a lie” (see Rom 1:25).

Blasphemy against the Holy Spirit, effectively removes, the only remedy for sin.  The Spirit says;  You must acknowledge, and confess, and repent,  of ALL sin, and EVERY sin.  And if you refuse, then sin, without exception, brings forth death!   It’s a foundational truth of God.

Have I “boxed in God”, by preaching the exact words of the Holy Spirit?  Not hardly.  This is simply the straight and narrow path, that God has provided for us, so that we all can enter heaven.

Before I close, I want to say a few words about the “scenarios” that we discuss from time to time, concerning being forgiven of a sin.  I just want to ask you please, please don’t try to devise scenarios, that would in effect, provide an exclusion, to the very foundational truth of God, that we must repent of all sin in our life.

The suggested scenario has been;  What if I’m driving down the highway, and I commit a sin in my mind, and the very next second I wreck the car and die in the accident?  Will I be lost because I didn’t repent of that sin?

A scenario like that, is IMPOSSIBLE to happen, because of what God tells us about repentance.  Here’s another very foundational truth of the bible.  When the household of Cornelius was given the gift of tongues, by the Holy Spirit, to confirm that God had accepted them into His fold, the Jews who were gathered there that day said;  “Well then, God has granted to the Gentiles also, the repentance that leads to life.”   Acts 11, verse 18.

So again, please, let’s not go around just looking, to think up scenarios, that would side-step, the foundational truths of God.  ALL sin is unto death.  But ALL sin can be forgiven, if we deal with it, as per God’s instructions.  And God HAS granted us the opportunity to repent!

In closing, I’d just like to re-phrase  1 John 5:16 & 17,  in way that is really easy to understand.  It’s very simple, based on the foundational truths of the bible.  Here’s what those two verse are telling us..

Confess your sins, be always willing to repent, and pray for one another, so that we all may be healed.