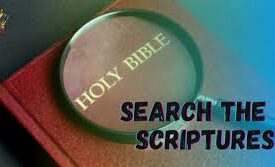 “The brethren immediately sent Paul and Silas away by night, to Berea.  And when they arrived, they went into the synagogue of the Jews.  Now these were more noble, than those in Thessalonica;  For they received the word with great eagerness, examining the Scriptures daily, to see whether these things were so.”

Paul and Silas preached unto the Jews of Berea, and the scripture says that those Jews were eager to hear the preaching.  I would imagine that they had heard about both Paul and Silas.  And these people were “more noble”, than those Jews in Thessalonica, where Paul and Silas had just been run out of town, you might say.

Let me read to you from  Acts 17, verses 1 thru 7;  “Now when they had traveled through Amphipolis and Apollonia, they came to Thessalonica, where there was a synagogue of the Jews.”

This is Paul and Silas who were travelling around, and preaching the gospel.  And it was the custom of Paul, that when he arrived in a city, he would go to the synagogue of the Jews, and he would preach to them.  You know, a lot of people think that the reason Paul was going into the synagogues, was to worship with the rest of the Jews, and to practice the Jewish religion.  And so people say that we all need to be still practicing the Jewish religion, because that’s what the apostle Paul did.

But that’s missing the point of WHY Paul would go into the synagogues.  It wasn’t to continue practicing Judaism, but it was for the specific purpose of finding a ready audience of God’s people, so that he could teach them the new covenant;  The gospel of Christ.  That was obviously what was going on, as you’re going to see from the next few verses.

And so..  Verse 2;  “And Paul, as his manner was, went in unto them, and three sabbath days reasoned with them out of the scriptures.”   Three weeks in a row Paul did this, teaching God’s people, the new covenant.  But obviously, the scriptures that Paul was using, were what we call, the old testament scriptures.  And I would have to believe that the specific scriptures that Paul was using, were the ones that prophesied about the Messiah.  (The Christ)

That’s pretty much what peter had told the Jews on the day of Pentecost, in Jerusalem.  Peter said, in  Acts 2, verse 36;  “Therefore let all the house of Israel know for certain, that God, has made Him, both Lord and Christ– this Jesus whom you crucified.”   This Jesus is the messiah!

That is the very foundation of the Christian religion, that Jesus “is the Christ, the Son of the living God”, as Peter proclaimed in  Mathew 16, verse 16.  And Paul said in  1 Corinthians 3, verse 11;  “For no other foundation can anyone lay, than that which is laid, which is Jesus Christ.”

And Jesus Himself stated clearly in  Mathew 16, verse 18;  “..and on this rock, (this bedrock truth, this bedrock foundation) I will build My called out assembly of the saved (My church), and the gates of Hades shall not prevail against it.”

Jesus is saying that even though the Jews are going to put Me to death, and even though My very soul is going to be in hades, the “gates of hades”, or in other words, the confines of that realm, will not prevent Me from building My congregation.  And once again, Peter said, in  Acts 2:24;  “But God raised Him up again, putting an end to the agony of death, since it was impossible for Him to be held in its power.”   In other words, “the gates of hades” could not hold, the soul of Jesus the Christ.  He burst right through it’s power.  “Raised from the dead, through the glory of the Father!”   Romans 6, verse 4.

Jesus said;  “I will build My church.”  And you know, that word “build”, actually refers to a “house builder”.  Jesus is indeed the builder of “a spiritual house”, a house not made with hands.   And Peter, once again, said in  1 Peter 2, verse 5;  “..you also, as living stones, are being built up, a spiritual house, a holy priesthood, to offer up spiritual sacrifices, acceptable to God, through Jesus Christ.”

We as Christians, right here and right now, are the individual stones, which make up a spiritual house, of which Jesus Christ is the “house builder”.   And at the same time, we are also a “Holy Priesthood” offering up sacrifices to God, through Christ.  Our very lives are the sacrifices that we offer.  Christ offered His life, and we offer ours.

And in  verse 9,  of this same chapter,  1 Peter 2, verse 9,  Peter refers to us as “a chosen generation, a royal priesthood, an holy nation, a peculiar people..”   Do you know what “peculiar people” means?  It means a people possessed by God.  We are owned by God.  We are His possession.  “That we should show forth the praises of Him who hath called you, out of darkness, into his marvellous light.”

He called you, out of this world, out of darkness, and into His kingdom, His “called out assembly”.  His church.

A lot of people get that confused, and they think that there’s going to be some thousand year period, yet to come, in which Christ will “reign over the earth”.  But Christ isn’t ever going to reign over the earth.  God already has all power and authority over everything in heaven and on earth.  But Christ’s reign isn’t over this earth.

Just like He said;  “My kingdom is not of this realm, it is not of this world.”  It’s a spiritual kingdom, and it is a spiritual “house”, and all Christians are the “living stones” which make up that “spiritual house”.  And we reign as priests, with Christ, right now, for “a thousand years”;  Till the end of time.

But you know, way back at the beginning of this lesson, we were reading from  Acts chapter 17.  And we had read through  verse 3.  And so let me continue with that reading..

Do you remember what was happening?  Paul and Silas had arrived in Berea, where those very “noble” Jews lived.  Most of the time, the word “noble” refers to being of “high” or “noble” birth.  Like a prince, or a king or queen.  But in this verse, the word means “noble-minded”.  That’s the wording used in the It means that they were of the mind, to be thinking of those “higher things” of God.

Well, those Jews of Berea, were in the very good habit of focusing on those “higher ways” of God.