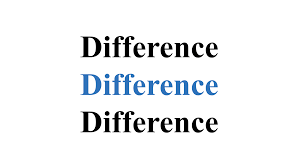 All Scripture..  Inspired and Profitable

And so let’s see what kind of profit you might be able to gather from the verses that I’ve chosen for today.

How Can You Tell the Difference ?

And of course that doesn’t only apply to women, but it can apply to anyone.  But as it applies to women in particular, God instructs us, in  1 Timothy 2, verse 9;  “In like manner also, that women adorn themselves in modest apparel, with shamefacedness and sobriety; Not with braided hair, or gold, or pearls, or costly array.”

The word “modest” conveys the idea of bashfulness.  In other words, when you clothe yourself, do it with a sense of bashfulness, not with a sense of flaunting yourself.  The whole idea there, is to NOT have as your desire, to be seen and admired, by others.   So then whether it’s how you dress, or how you behave, modesty is the word of the day.  It’s not much different from the condemnation that Jesus gave of the Pharisees, when He said in  Mathew 25, verse 5;  “But all their works, they do, to be seen of men..”     Hey everyone, Look at me!

Now here’s a verse that we might say, is “an exception” to the rule of not doing things to be seen by others.   I think you’ll understand my point when I read the verse.  It’s  Mathew 5, verse 16,  and in this verse, Jesus says;  “In the same way, let your light shine before others, so that they may see your good works and give glory to your Father who is in heaven.”  Our life is GOING to be seen by others.  And so let’s make sure that what people see, is that which will “glorify our Father who is in heaven”.

Paul wrote in  Titus 2, verses 4 & 5,  that the older women of a congregation, should  “..teach and admonish the younger women;  (and here’s actually seven things that the older women should be teaching)  “.. To love their husbands, to love their children, to be self-controlled, pure, (I think modesty would certainly come into play there) a keeper of the home, kind, subject to their own husbands, so that the word of God should not be profaned.”

So then there’s two differences that we’ve seen so far, between a Christian, and a non-Christian.  How you dress, and present yourself, and how you act;  With good deeds, good works.  James 2:24  tells us;  “You see that a person, is justified by works, and NOT by faith alone.”   Our good works, is an essential part of what justifies us, and what saves us from our sins.  It’s just like what we just read from  Ephesians 2:10;  We’ve been saved in the kingdom of Christ, for the very purpose of doing good works.

Here’s are the words of that verse;  ““We are His workmanship, created in Christ for good works, which have been prepared beforehand, that we should walk in them.”

But what other differences are there, between a Christian, and a non-Christian?   Here’s some things that the bible tells us that you’ll see, in a Christian’s behavior;  And if you don’t see these things, then you’re probably not looking at a Christian at all;  Or at least you’re not looking at a faithful Christian.

And those seven things are named in  Proverbs 6, verses 16 thru 19;  “There are six things which the LORD hates, Yea seven, which are an abomination to Him;  A proud look, A lying tongue, And hands that shed innocent blood.  A heart that devises wicked plans, Feet that are swift in running to evil,  A false witness who speaks lies, And one who sows discord among brethren.”

You simply won’t see a faithful Christian doing any of those seven things.  Oh you’ll see those things all the time, in the people of the world, but not in a faithful Christian!  You know, I’m quite sure though, that sometimes, you’ll even see some of those things, within a congregation of the Lord’s people.   But not among the faithful ones though.  Not among the strong ones.

And so again, you who ARE among the strong ones, you’ll need to be doing some teaching, and some encouraging, if you see those things happening.  That’s the way God has ordained it to be.  The strong, need to be encouraging the weak.  Not just criticizing, and tearing them down;  But building them up, though teaching, and through example.

And here’s something that ALL Christians need to be like;  And it’s definitely something that’s going to set you apart from a non-Christian;  And that something is..  We ALL need to be “easily entreated”.  We’ve talked about that quality in bible class.  In  James 3, verse 17,  here’s how the KJV phrases it;  “But the wisdom that is from above, is first pure, then peaceable, gentle, and easy to be entreated;  Full of mercy and good fruits, without partiality, and without hypocrisy.”

In some of the other versions, the phrase “easy to be entreated”, is translated as..  “open to reason, willing to yield, and compliant.   And one of the definitions of the word, is..  “ready to obey”.   “Easily entreated, and ready to obey the Lord’s word.   That’s one thing that really sets a Christian apart, from a non-Christian;  Ready always, to obey the word of the Lord.

Ephesians 4:13  says it like this;  “Until we all attain to the unity of the faith, and of the knowledge of the Son of God, to a mature man, to the measure of the stature which belongs to the fullness of Christ.”

But now, let’s get back to the idea of, What’s the difference, between a Christian, and a non-Christian?   I’ve talked about several very good traits that you’ll definitely see in a faithful Christian.  And I’ve mentioned several bad traits that you won’t see in a faithful Christian.  But here’s a question that I want you to think about, concerning those godly traits, and those sinful traits..

Well, the answer is NO, none of those things will make a person a Christian.  Yes a Christian must have those traits, those qualities;  But that’s not what makes you, a Christian.   There are lots and lots of people of the world, who faithfully live by those godly traits, and who faithfully shun those sinful traits.  And I’m quite sure that each and every one of you, know some people like that.  Good people, kind people, considerate people.  People who have been raised to embrace Christian morality, and Christian values.

First, of all, a Christian, is a saved person.  A person who has been forgiven of their sins, (forgiven by God) and “saved” from the consequences of their sin.  Now let me show you from the bible, that those things that we were talking about, are NOT what saves a person, and makes one a Christian.   Ephesians 2, verses 8 & 9,  clearly tells us that the deeds that we do, are NOT what saves us.  Here it is, right from the bible;  “For by grace you have been saved, through faith; And that not of yourselves, it is the gift of God;  Not as a result of works, so that no one may boast.”

Those “good deeds” that we do, do not make us a Christian,  and they do not save us.   And here’s one more scripture, just to back up that first one.   Titus 3, verses 4 thru 6,   says this;  “But when the kindness of God our Savior, and His love for mankind appeared, He saved us.  Not on the basis of deeds which we have done in righteousness, but according to His mercy, by the washing of regeneration, and renewing by the Holy Spirit, whom He poured out upon us richly, through Jesus Christ our Savior.”

I’d like you to take note of a few specific words from that verse.  And the words are..  “not on the BASIS of deeds that we have done..”   Those words correspond very well with the words of  Ephesians 2, verse 8,  which say..  “and that not OF yourselves..”   So then the BASIS of our salvation, is not the deeds that we do, and salvation is not OF ourselves. In other words, salvation doesn’t ORIGINATE from us.   Salvation ORIGINATES from God, and it’s on the BASIS of God’s mercy and grace.

Hebrews 6, verses 1& 2,  puts it this way;  “Therefore, leaving the elementary teaching about the Christ, let us press on to maturity, not laying again a foundation of repentance from dead works, and of faith toward God;  Of instructions of baptisms, and of laying on of hands, and of resurrection of the dead, and of eternal judgment.”

The “elementary teachings about the Christ”;  The “foundation of repentance from dead works”;  “Faith toward God” (remember, faith, means obedience!)  “Instructions of baptisms”;  The “resurrection of the dead”;  And “eternal judgment”.   THESE, things, are what makes the difference, between a Christian, and a non-Christian!

That’s the difference, between a Christian, and someone else, who lives a good moral and virtuous life, but has never understood the BASIS of salvation.  And the BASIS of obedience, to the elementary teachings, and commands of Christ, concerning the forgiveness of our sins, and being added to the kingdom, which is the church, the congregation and assembly of the saved.

And it’s our job to teach, these elementary and foundational facts, about salvation, to those who we interact with, from day to day.  These good people, who are already living the life of a Christian, (for the most part) but have never been forgiven of their sins.

It’s up to us;  It’s up to each one of us individually, and also, it’s up to us together, as a congregation, to bring the simplicity of salvation, to the world around us.