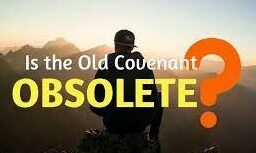 As I previously read, from  Galatians 3, verse 19;  “Why then the law?  It was added because of transgressions, UNTIL the seed should come (until the offspring should come) to whom the promise had been made..”   And of course we know that “the seed” or “the offspring” was the offspring of Abraham, and  verse 16  of this very chapter names that offspring, to be Jesus Christ.

So, God’s plan of salvation for man, was decreed from before man was even created.  And it was according to plan, that the old covenant, mad with the nation of Israel, and with no one else, was to remain in effect, governing Israel, UNTIL Christ should come.  But the old covenant didn’t end at the birth of Jesus, the seed of Abraham.  That’s not exactly what that verse is saying.

The word “until” can mean..  “as far as, up to, until, and during”.   And I’d like to suggest to you, that in talking about how long the old covenant was ordained to remain in force, that word translated “until”, means all of those things.  It means that the law of Moses, the old covenant, was designed to remain in effect..  as far as, and up till, and DURING the life of Jesus Christ.

We know that it was in effect all throughout the life of Jesus, because Jesus KEPT the law, and He instructed His countrymen, to keep that law.  Jesus spoke of the old law repeatedly, and He taught from the old law, repeatedly, He kept the old law, perfectly.

Right after Jesus said those words about not coming to abolish the law and the prophets, but instead, coming to bring them to completeness, He said this, in  Mathew 5, verse 18;  “For I tell you truly, until heaven and earth pass away, not a single jot, not a stroke of a pen, will disappear from the Law, until everything is accomplished.”   And so again, I’m not going to abolish the old law, but rather, I’m going to make sure that it all gets accomplished, and completed!  And not a jot nor a stroke of it will disappear, until I do bring it to completion.

And so listen to  verse 19;  “Whoever then shall set at naught, even one of the least of these commandments, and teaches others to do the same, shall be called least in the kingdom of heaven;  But whoever keeps and teaches them, he shall be called great in the kingdom of heaven.”  So Jesus indeed taught everyone to keep the old covenant, while He lived.

But Jesus even went beyond the laws of the old covenant, as is illustrated in this same chapter,  Mathew chapter 5, verses 21 thru 48,  which is the end of the chapter.

For example, Jesus said in  verses 21 & 22;  “You have heard that it was said to the ancients; (of course He’s referring to the ancient Israelites)  Do not murder.  And.. Anyone who murders will be subject to judgment..”   That’s the law of Moses.  But Jesus is going to go beyond the law of Moses, as he begins to instruct the people in what would be the new covenant law of Christ.  In the new covenant law of Christ, not only is the action dealt with, but the intent of the heart is dealt with.

And so Jesus says;  “But I tell you, that anyone who is angry with his brother will be subject to judgment.  (The anger spoken of here is what you would call “fixed anger”!  In other words it’s a different kind of anger, than what’s spoken of in  Ephesians 4:26, where the scripture says;  “Be angry, yet do not sin.  Do not let the sun set upon your anger”,  In other words, don’t allow what might be rightful anger, to become “fixed anger”.  Because the next thing you know, you’re holding a grudge, and you’re hurting yourself, much more than the one you’re angry with!

And now Jesus continues..  “Again, anyone who says to his brother, ‘Raca,’ will be subject to the Sanhedrin.”  The word “Raca” means..  “worthless one”.   That’s the feeling that you have in your heart, coming out of your mouth.  Jesus said in  Mathew 15, verse 18;  “But the things that come out of the mouth, come from the heart, and these things defile a man.”   So then, “name calling” is not a good thing, because it’s more than just words, isn’t it?

But Jesus still isn’t done with this subject.  And so he says;  “But anyone who says;  You fool!  Will be subject to the fire of hell!”  And that word “fool”, is just as derogatory as you can get, and it’s kind of hateful too.  It means..  You stupid one,  you are mentally inept!   Now that’s just downright hateful.  And so it’s no wonder you’d be in danger of “the fire of hell”.

So in other words, if we allow our anger towards another person, to become “fixed anger”, fixed in our hearts, we might as well have committed murder.  Out of the mouth, come the issues of the heart.  And when our heart is affected, our soul is affected.  And so here’s what else Jesus has to say about it, in  verses 23 & 24;  “Therefore, if you are presenting your offering at the altar, and there you remember that your brother has something against you, leave your offering there before the altar and go;  First be reconciled to your brother, and then come and present your offering.”

Bringing an offering to God has always been a command, from even before the old covenant;  And it’s still a commands for us today as Christians.  But you can’t fulfill that command, or any other command for that matter, if your heart isn’t right with your brethren.  Oh, you can give the offering, but you won’t be fulfilling the command.  Because your offering will be in vain.

How important our hearts are, to God.  And Jesus actually goes on even further with His advice, in  verses 25 & 26;  “Reconcile quickly with your adversary, while you are still on the way to court.  Otherwise, he may hand you over to the judge, and the judge may hand you over to the officer, and you may be thrown into prison.  Truly I say to you, you will not come out of there until you have paid up the last cent.”

You know, we might just rephrase that a little bit, to make it more applicable to us all.  Jesus said;  “Reconcile quickly with your adversary, while you are still on the way to court..”    But we might say;  “Reconcile with your adversary quickly, while you are still on your way, to stand before the judgment seat of Christ.”  (2 Corinthians 5:10)   Because once we get there, our time for reconciliation will be over.   And we may just get handed over to the Judge.

So then Jesus really expanded on that “thou shall not murder” commandment, and He expounded quit elaborately on it also.

But now Jesus makes a second comparison, between another one of the laws of the old covenant, and His expanded version of that law, in the new covenant.  And so Jesus says in  verse 27;  “You have heard that it was said;  You shall not commit adultery.”  There’s the very simple old covenant law, dealing with a physical act.  But in giving His listeners a glimpse of the new covenant, Jesus says in  verse 28;  ” But I say unto you, That whosoever looketh on a woman to lust after her, hath committed adultery with her already in his heart.”

The word “hell” in those verses, is literally “Gihinnom”, referring to the valley of Hinnom.  It was evidently a deep draw, south west of the city of Jerusalem.  It’s where refuse was burned continually.  And so the idea of one’s body being cast into this burning pit, or draw, was not a pleasant picture to visualize.  And of course the valley of Hinnom, also called Gehenna, came to be associated with the place of eternal punishment for the ungodly.  That word is used 12 times in the new testament.  And I believe that 11 of those twelve times, it was used by Jesus, issuing the warning of punishment for the ungodly.  The only other time that the word gehenna is used, is in  James 3, verse 6, where it’s used as an analogy of how wicked the tongue can be.

James 3, verse 6  says;  “The tongue also is a fire, a world of wickedness among the parts of the body. It pollutes the whole person, sets the course of his life on fire, and is itself set on fire by gehenna.”  (by hell)

And so once again in the bible, God reminds us of the misuse of the tongue, and of the words we speak.  those words come from the heart, and it’s what’s in the heart, and what proceeds out of the heart, that defiles a person.

I better quit for tonight.  But I’d like to continue this little study next week, about how Jesus expanded on the old law, and in doing so, gave a glimpse of the new law in Christ.