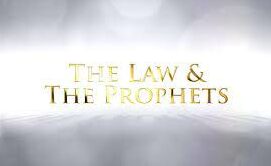 How did Jesus Fulfill the Law and the Prophets ?

Jesus said to His listeners, in  Mathew 5, verse 17;  “Do not think that I came to abolish the Law or the Prophets;  I did not come to abolish, but to fulfill.”

There is so much misunderstanding concerning that verse, that I thought I’d say something about not only that specific verse, but also about the entire subject of the law of Moses, and the old testament prophets.  I would venture to say that not too many people completely understand what Jesus meant, when He said that He came to “fulfill” the law and the prophets.  And the key to a proper understanding of what Jesus meant, is to understand what the word “fulfill” means.

When it comes to the prophets, Jesus was the fulfillment of many old testament prophecies.  For example,  a well-known prophecy is in  Isaiah 53.   It begins like this;  “Who has believed our message? And to whom has the arm of the LORD been revealed?  He grew up before Him (before God) like a tender shoot, and like a root out of dry ground.  He had no stately form or majesty to attract us, no beauty that we should desire Him.  He was despised and rejected by men, a man of sorrows, acquainted with grief.  Like one from whom men hide their faces, He was despised, and we esteemed Him not.  Surely He took on our infirmities and carried our sorrows;  Yet we considered Him stricken by God, struck down and afflicted.  But He was pierced for our transgressions, He was crushed for our iniquities;  The punishment that brought us peace, was upon Him;  And by His stripes we are healed.”

And then there’s  Psalm 16, verse 10,  which prophesied this event;  “For You will not abandon my soul to Sheol, (or in our language, “hades”, the realm of spirits separated from their physical bodies at death) nor will You let Your Holy One see decay.”  A clear prophecy of the resurrection of Jesus.   Fulfilled completely.

But when Jesus said that He came to “fulfill” the law and the prophets, He meant more than just a “coming to pass” of certain predictions made about Him.  You see, the prophets were about a whole lot more, than just predicting future events.  The prophets, and the law of Moses, the old covenant, was about salvation itself, and God’s plan of salvation.  The last verse that I read from  Isaiah 53  really sums it up..  “And by His stripes we are healed.”   That’s salvation!

Galatians 3:24  tells us;  “Wherefore the law was our schoolmaster, to bring us unto Christ, that we might be justified by faith.”   Jesus Christ was the “completion” of the law of Moses.  Jesus didn’t come to abolish the law, but He came to complete it!   And that’s what Jesus meant when He used the word “fulfill”.   It means..  “to bring to completion”, and “to make full”;  Thus “to be fulfilled”.  Without Jesus, the law of Moses would have forever been “incomplete”.  The very purpose of the law would have never been fulfilled.

The law served as a  “schoolmaster” so to speak,  to bring men unto Christ, that there might BE salvation.  But without Christ, the law would not only have been “incomplete”, it would have been totally in vain!   The law of Moses was given to bring the Jews to the Messiah.  But without the Messiah, following the old law would have been like going on a ten thousand mile journey, only to find a road block a mile short of your destination, telling you this is as far as it goes.  the road ends here.

But the old covenant “road” doesn’t end before Christ.  And it doesn’t go on after Christ.  The old covenant road ends WITH Christ!  It ends with salvation through the forgiveness of sins, by the blood of Christ.

But the law of Moses really served a dual purpose.  Here’s what we’re told in  Galatians 3, verse 19;  “Wherefore then serveth the law?  (in other words, what was the purpose for the law?)  It was added because of transgressions..”   Because the people of the nation of Israel were conducting themselves sinfully, God gave them the law of Moses, to instruct them in righteous living.  But even this same verse also stresses the dual purpose of the law.   The verse says;  “..It was added because of transgressions, till the Seed should come, to whom the promise was made..”

The promise of salvation was made originally made to Abraham, when God said to him, in  Genesis 12, verse 3;  “..And in you, all the families of the earth shall be blessed.”   And  Galatians 3, verse 16  elaborates on this a bit, with these words;  “Now to Abraham and his seed, were the promises made.  He saith not..  And to seeds, (plural) as of many;  But as of one..  And to thy “seed”, which is Christ.”

God’s purpose, and God’s intent, when He gave the old covenant law of Moses, was that it should remain in effect, instructing the people in righteousness, and preparing them for the coming Christ (the Messiah) , UNTIL the Christ arrived!   And then once the Christ had arrived, then HE would complete, what the law and the prophets could not do, which was to bring salvation to Israel, and to all mankind.

Hebrews 10, verse 4  tells us that  “For it is not possible, that the blood of bulls and of goats, should take away sins.”  Therefore, Jesus Christ came, in order to complete what the old law could not do by itself.  And when Jesus had “fulfilled”, and brought to completeness, all the prophecies made about Him, and when He had “completed” what the old law was not capable of doing, then the period of time that the old law had been assigned to, ended.  The time period was from the giving of the old covenant law of Moses, upon My Sinai, in the wilderness, until the death and burial, and resurrection, and ascension of Jesus Christ was completed.

The last recoded words of Jesus, before He died on the cross, were..  “It is finished”  (John 19, verse 30)    The work that Jesus had come to this earth to do, was finished.  The old covenant had not quite been completed on that day though.  Because God the Father still had some work to do.   As we’re told in  Romans 6, verse 4;  “..Christ was raised up from the dead by the glory of the Father..”   And as we read in  Acts 1, verse 9;  “Now when He had spoken these things, while they watched, He was taken up, and a cloud received Him out of their sight.”

Now, all that the NEW covenant was ready to be unveiled.   Ephesians 3:9  calls it..  “..the fellowship of the mystery, (the mystery of the gospel)  which from the beginning of the world hath been hid in God, who created all things by Jesus Christ.”

And Jesus brought to completion the very purpose of the entire old covenant law of Moses.  And when He did, were told in   Colossians 2:14,  that He  “Blotted out the handwriting of ordinances  (that literally means..  the handwritten legal document, which was the old covenant law of Moses.  Part of which was written by the very  “finger of God”   on “tablets of stone”  Exodus 31:18 )  that was against us, which was contrary to us, and took it out of the way, nailing it to his cross.”

We’re told in  Romans 4:15;  “For Law brings wrath;  And where there is no Law, neither is there transgression.”   Paul had written in  verse 7;  “..Indeed, I would not have known sin, if not for the law.  For I would not have been aware of coveting if the law had not said, “Do not covet.”

So then the law exposed the guilt of the people;  The guilt of sin!  But at the same time, the law offered no forgiveness of sin!   Therefore you can see how that the old covenant, was actually an adversary of the people;  Just like satan, the very thing that tempts us to sin in the first place, is our adversary.  Here’s something that brings about your guilt, but then just keeps holding you there, and doesn’t allow you any way out of sin.

We’re told in  1 Corinthians 15, verse 56;  “The sting of death is sin, and the power of sin is the law.”   There is no reason whatsoever to fear death, unless you’re in sin!  Without sin, there IS no “sting” to physical death.  But rather, physical death simply bring relief;  Relief from a  world of sin.   Romans 8, verse 1  says that  “There is now no condemnation for those who are in Christ.”  No condemnation, only relief.  It’s just like Job said, in  Job 3, verse 13;  “For now I would have lain down, and been quiet;  I would have slept then, I would have been at rest..”

Sin gets it’s power from the law.  But  1 Corinthians 15:57  says;  “But thanks be to God, who gives us the victory, through our Lord Jesus Christ!”   And thanks be to Jesus Christ, who took that old law away, and “nailed it to His cross”!   Jesus crucified the old law, as He Himself was being crucified!

And so once again, Jesus was indeed the completion of both the law and the prophets.   Jesus gave us these commandments, in  Mathew 22:37 thru 39;   “Thou shalt love the Lord thy God with all thy heart, and with all thy soul, and with all thy mind.  This is the first and great commandment.  And the second is like it:  You shall love your neighbor as yourself.”

And you might say also, that in Jesus, that greatest commandment is made complete;  It’s fulfilled;  Just like the whole law and the prophets are fulfilled, in Jesus.