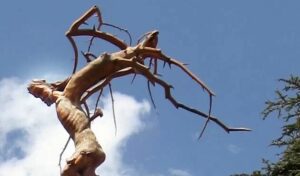 Jesus Hung on a Tree

In a previous lesson titled  “Four Trees Of God”,  I talked about the cross that Jesus was crucified on, and how that cross was referred to by bible writers, as a “tree”.  The word is used figuratively in the new testament, but the meaning goes back centuries.

Let me remind you of a few of those verses that speak of the cross, as a “tree”.

There was  Acts 5, verse 30  which says;  “The God of our fathers raised up Jesus, whom you had killed, by hanging Him on a tree.”

And then  Acts 10, verse 39  which says;  “We are witnesses of all that He did, both in the land of the Jews, and in Jerusalem.  And although they put Him to death by hanging Him on a tree.”

Then there was  1 Peter 2:24.  And that verse tells us;  “He Himself bore our sins in His body, on the tree, so that we might die to sin, and live to righteousness. “By His stripes you are healed.”

And then we came to this verse;  Galatians 3:13.  and it tells us that..  “Christ redeemed us from the curse of the law, by becoming a curse for us. For it is written:  Cursed is everyone who is hung on a tree.”

The phrase  “Cursed is everyone who is hung on a tree”  is a phrase that goes back centuries, to the time of Moses.  As a matter of fact, Moses spoke those very words, as he gave instructions from God, to the people of Israel.  Listen to these very harsh sounding instructions, that God had for Israel..

I’m going to read from  Deuteronomy 21, verses 18 thru 21;  “If a man has a stubborn and rebellious son who will not obey the voice of his father or the voice of his mother, and, though they discipline him, will not listen to them, then his father and his mother shall take hold of him, and bring him out to the elders of his city, at the gate of the place where he lives, and they shall say to the elders of his city; This our son is stubborn and rebellious;  He will not obey our voice;  He is a glutton and a drunkard.  Then all the men of the city shall stone him to death with stones.  So you shall purge the evil from your midst, and all Israel shall hear, and be afraid!”

Purging sinfulness from the nation of Israel was a very serious thing, in those days.  God demanded that they people remain pure, and holy.

God said to Moses in  Leviticus 19, verse 2;  “Speak to all the congregation of the people of Israel, and say to them;  You shall be holy, for I the LORD your God am holy.”

And again He said, in  Leviticus 20, verse 7;  “Consecrate yourselves therefore, and be holy;  For I am the LORD your God.”  And in  verse 26,  the Lord God says;  “You shall be holy to Me, for I the LORD am holy, and have separated you from the peoples, (from the people of the other nations) that you should be Mine.”

And clear back in  Exodus 19, verses 5 & 6,  God told the people;  “Now therefore, if you will indeed obey My voice, and keep My covenant, you shall be My treasured possession, among all peoples, for all the earth is mine!  And you shall be to Me a kingdom of priests, and a holy nation.  These are the words that you shall speak to the people of Israel.”

Do those sound like the words that God uses in speaking to us?   First of all, Peter wrote, in  1 Peter 15 & 16;  “But as He who called you is holy, you also be holy, in all your conduct;  For it is written; Be holy, because I am holy.”  Now those words are for us!  Peter quotes the old testament, like we just read, but command is for us today.

And God reiterates these words for us today also, from  1 Peter 2:9;  “But you are a chosen people, a royal priesthood, a holy nation, a people for God’s own possession, to proclaim the virtues of Him who called you out of darkness into His marvelous light.”   And of course the phrase  “His marvelous light” refers to the kingdom of Jesus Christ.

Colossians 1:13 & 14  tells us;  “He has delivered us, from the domain of darkness, and transferred us to the kingdom, of his beloved Son, in Whom we have redemption, the forgiveness of sins.”

So then, don’t be mistaken, and think that the level of purity, and humble obedience that God desired from Israel, was only for them.  Because it was not only for some ancient time past;  It’s for us too.  We are now that “royal priesthood”,  that “holy nation”,  “a people for God’s own possession.”

But now, I didn’t finish the passage that I was reading, from  Deuteronomy 12,  about the rebellious son, who was to be stoned to death, purifying the nation of Israel.  And so listen to  verses 22 & 23;  “And if a man has committed a crime punishable by death, and he is put to death, and you hang him on a tree..”   Remember  verse 21..  “So you shall purge the evil from your midst, and all Israel shall hear, and be afraid!”   Hanging the dead body of the offender, was a part of showing the people in a very graphic manner, how serious sinfulness is to God.  And it should make us afraid.

But here’s  verse 23;  “You must not leave the body on the tree overnight, but you must be sure to bury him that day;  Because anyone who is hung on a tree, is under God’s curse.  You must not defile the land that the LORD your God is giving you as an inheritance.”

“..anyone who is hung on a tree, is under God’s curse!”    Strong words.  And why are they under God’s curse?  Because of the very reason that they are hanging on that tree!  Because they have sinned without repenting!  And that is what brings God’s curse upon you.

Do you remember how that the body of Jesus Christ was not allowed to hang upon the cross past evening?  How that Joseph of Arimathea, had requested to be allowed to take down the body, and place it in the tomb?  And How Joseph and Nicodemus did just that.

And I’m sure you remember the words of  Galatians 3:13,  that we read just a bit earlier;  “Christ redeemed us from the curse of the law, by becoming a curse for us.  For it is written:  Cursed is everyone who is hung on a tree.”   The idea of Jesus becoming a curse, is of course figurative language.  It has reference to how He “carried” our sins to the cross, and died for them, so that we could live.

What was “the curse of the law”?   That’s referring to the law of Moses.  And the “curse” of that law, is actually the “doom” of the law.  Or to put it another way;  It is the guilt that is revealed, and felt, by the law of Moses.  Why was there such guilt, and such doom, for those living under the law of Moses?  I spoke about that in a lesson just a week or two ago.  And the “doom” that came because, of the “guilt” that was revealed through the law, was because the law offered no forgiveness of the sins of the people.  No forgiveness, but only a revealing of the guilt of sin.  And so the people were “doomed”.

Galatians 3, verse 10  says this;  “For all who rely on works of the law, are under a curse; For it is written, “Cursed be everyone who does not ABIDE by ALL things written in the Book of the Law, and do them.”   And as we all know, NO ONE can abide perfectly, in all things.  And so the result, is guilt and doom.  But Jesus took the “curse” and the “doom” upon Himself.

Paul was writing these things to the Jews living in Galatia, because many of them were evidently having trouble understanding God’s plan of salvation through Jesus Christ.  Some of the Jews were pretty hesitant to let go of the old covenant law, that they were brought up with.  And I think we can understand why.  I mean, it’s hard to let go of something that has been a part of you all your life, and to embrace something different.

And so let me back up to the beginning of  Galatians chapter 3.   And I’m going to read from the beginning, starting in  verse 1..

“O foolish Galatians! Who has bewitched you? It was before your eyes that Jesus Christ was publicly portrayed as crucified.  I would like to learn just one thing from you: Did you receive the Spirit, (and I think he means..  Did you receive the words of the Spirit in your hearts)  by works of the law, or by hearing with faith?”   Hearing God’s word with faith, is exactly how we do receive the Spirit in our hearts.  It’s not done miraculously.  “So then faith comes by hearing, and hearing by the word of Christ.”  (Romans 10:17)

And so Paul continues..  “Are you so foolish?  Having begun by the Spirit, are you now being perfected by the flesh?  Did you suffer so many things in vain—if indeed it was in vain?  Does He who supplies the Spirit to you, and works miracles among you, do so by works of the law, or by hearing with faith?”  Well, that’s a rhetorical question.  Of course they’ve been supplied with the Spirit, and with what sounds like miraculous gifts of the Spirit, because of their faith.  Not because of the old law of Moses.

“Know then, that it is those of faith who are the sons of Abraham.  And the Scripture, foreseeing that God would justify the Gentiles by faith, preached the gospel beforehand to Abraham, saying;  In you shall all the nations be blessed.”  And that’s a quote from  Genesis 12. verse 3.

“So then those who are of faith, are blessed with Abraham, the believer.”  And here’s where  verse 10  comes in;  “For all who rely on works of the law are under a curse; for it is written, “Cursed be everyone who does not abide by all things written in the Book of the Law, and do them.”

So  verse 11  ended with those words..  “The righteous shall live by faith”.  And  verse 12  says;  “But the Law is not of faith.  Rather, “The one having done these things will live by them.”   In other words, the one who is performing the works of the law, is trusting in those works of the law of Mosses.

And then of course  verse 13  is the verse that we began with in Galatians;  “Christ redeemed us from the curse of the law by becoming a curse for us;  For it is written, “Cursed is everyone who is hanged on a tree”.   No one has to live under that “doom” any longer, because Jesus has given us a new law;  A new covenant.  A covenant which does indeed, offer us the complete forgiveness of our sins, and the promise of an eternal home in heaven.