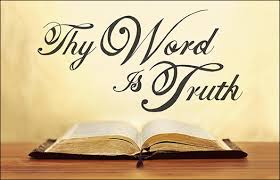 I’d like to try to answer the question;  How Did We Get The Bible?

A lot of people don’t believe that the bible is even FROM God.  And so they believe that men simply wrote it, trying to control others.  But that’s not the aspect of the question that I’d like to deal with.  What I’d like to deal with, is the fact, and the problem, that even among those who do believe the bible is the word of God, there is a difference of opinion, as to how exactly this “Word of God” came to be given to us in the first place.

For example, most Catholics believe that “the bible”, didn’t come into existence until late in the the fourth century AD.   And the final agreed upon decision, took quite a while to be decided.  It officially began, you could say, in the year 367, with a letter from a man named Athanasius, who was at the time, the Bishop of Alexandria.  Alexandria was a city that served as a port, at the southern end of the Mediterranean Sea, in northern Egypt.

In his letter, Athanasius included the 27 books that we now have in our bibles.  Now, not everyone in the Catholic church agreed on these same 27 books.  Some books like Hebrews, and James, and 1st and 2nd Peter, and 2nd and 3rd John, and Revelation were questioned.

But then the Catholic church leaders held various councils, in the years 382, and 393, 397, and 419.  And as a result of all those councils, the decision was more or less finalized, although there was still debate and disagreement between the churches of the Western side, and the Eastern side of Europe, even into the sixth century.

And if you ever have a discussion with some of the Catholics, you’ll find it virtually impossible to get them to understand that it was God who gave the “bible” to the world.  And although God did give the world His word “through” the “church”, it wasn’t through the Catholic church, but rather, it was through the “church” described in the bible.  The Lord’s church, the Lord’s “body”, the “kingdom” of Christ, the “church” of Christ.

You see, what really took place among the Catholic leaders, is not that they “gave” anyone the bible, but what they did was to finally “accept” among themselves, that the writings that God had given, were indeed, the inspired words of God.  Man had already had all these inspired writing, ever since the end of the first century.  And these inspired writings had been guiding Christians, ever since they had been given.  But the Catholic leaders, finally “accepted” what the true church had in their possession, for over two to three hundred years.

Now, concerning how God gave the bible “to the church”, let me read the words written by the apostle Paul, in  Ephesians 3, verses 8 thru 11;  “To me, (Paul) though I am the very least of all the saints, this grace was given, to preach to the Gentiles the unsearchable riches of Christ, and to bring to light for everyone,  (God’s word is ultimately meant for everyone) what is the plan of the mystery, hidden for ages in God, who created all things, so that THROUGH THE CHURCH (thru the members of the body of Christ) the manifold wisdom of God, might now be made known, to the rulers and authorities in the heavenly realms, according to the eternal purpose that He accomplished in Christ Jesus our Lord.”

A “principality” can refer to the territory that a prince or a king, or some other ruler has jurisdiction over.  In other words, he has power and authority over that territory, or that land.   But the word ‘principality can also refer to the ruler himself.  And so in this case, in  Ephesians 3:10, a “principality” IS a “ruler”.   And so we have “rulers and we have authorities”.  And the same two words are used again in  Titus 3, verse 1,  where Paul instructs Titus..  “Remind the believers, to submit to rulers and authorities;  To be obedient and ready for every good work.”

And so that verse from Titus, tells us that in the kingdom, there are “rulers and authorities”.   Who are those rulers and authorities?  Well, who was it that said He had “all authority” ?  It was Jesus.  But then Jesus delegated some authority to His apostles, didn’t He?  Back in  Mathew 28, verses 19 & 20,  Jesus delegated authority to His apostles.  He said in those verses;  “Go therefore, and make disciples of all nations, baptizing them in the name of..  (in other words, by the authority of)  ..the Father and of the Son and of the Holy Spirit.. (in other words, by the authority of God!)  ..teaching them to observe all that I have commanded you. And behold, I am with you always, to the end of the age.”

But let me get back to  Ephesians 3, verse 10.   You’ll find that the various translations all seem to phrase the verse just a little bit differently.  And the difference lies in the word order of the sentence.  You see, in the original Greek text, the word order is always quite a bit different than we would write it in English.

Let me just read that in the word order of the Greek text, and you’ll see that it sounds a bit awkward to us.  So, here it is..

“So that should be made known now, to the rulers and the authorities in the heavenly realms, through the assembly (the church) the manifold wisdom of God.”   So then, not too awkward, but different from the way we would typically write it.

So I asked my friend in Greece what he thought, would be the proper word order in English, for this verse, and here’s his answer..

He said;  “Gladly. Here it is, with its parts placed in proper English syntactic order:”

Now sometimes Harry uses words that I’m not quite sure about, like “syntactic order”.   So just to be sure of what he’s saying, I’ll go and look up the meanings of those words.  The word “syntactic”, means..  “having to do with or according to syntax.”   Well that’s great;  So what is “syntax”?

“Syntax” sounds pretty simple and straightforward.  From Wikipedia, (the online encyclopedia) here’s what syntax means..  “In linguistics, syntax is the set of rules, principles, and processes, that govern the structure of sentences in a given language, usually including word order. The term syntax is also used to refer to the study of such principles and processes.”

But the problem is, this set of rules and principles, don’t seem to be set in stone.  Various translators still translate verses of scripture, in different word order.  And that can lead to problems, when it comes to the bible.  Because something which may seem rather insignificant, like the order of words in a sentence, can actually lead to different theological teachings.  And let me give you an example of that..

In  2 Peter 2:9,  the KJV says;  “The Lord knoweth how to deliver the godly out of temptations, and to reserve the unjust, unto the day of judgment, (that means..  looking forward to the day of judgment)  to be punished.”   So there you have the unjust, being reserved, (or
kept” or “held over”) looking toward the day of judgment, when they would be punished.”   And I believe that is a totally accurate translation, and sentence structure, so that we know exactly what is meant.  And I believe is accurate, because the whole bible agrees with that teaching;  That when the unjust die, they are being “kept by God” and awaiting their earned punishment, which of course is, as the scriptures say in  2 Thessalonians 1, verse 9..  “..everlasting destruction, from the presence of the Lord, and from the glory of his power.”

But now let me read that verse from a different translation, which uses a different word order, which in turn, actually changes the meaning of the verse.  So this is from the NASB, which I used to use for many, many years, but that I believe gives a wrong translation of this verse.  So listen to how this is written..  “The Lord knows how to rescue the godly from a trial, and to keep the unrighteous under punishment, for the day of judgment.”   Now that says something entirely different!

In this case, the KJ is the correct translation, because as we all should know,  2 Corinthians 5, verse 10  tells us;  “For we must all appear before the judgment seat of Christ;  (And why must we al appear there before the judgment seat?)  That every one, may receive the things done in his body, (in other words, that they may receive the recompense, for the things which were done while living in the physical body)  according to what he hath done, whether it be good or bad.”

And then there’s another verse that confirms what this verse has just said, and that verse is  Revelation 22, verse 12.   And that verse says;  (Jesus speaking)  “Behold, I come quickly; And My reward is with Me, to render to each man, according as his work is.”

So there the bile says it again, very plainly, that when Jesus comes again, and at His judgment seat, (and not before) is when all will be recompensed, with either blessing, or punishment.  But I think that example clearly shows, how that just a little change in wording, and in sentence structure, can make a big difference in what a verse says.

Now, let me get back to what my Greek friend said about the word order of  Ephesians 3, verse 10.  He said;  “Here it is, with its parts placed in proper English syntactic order;  “so that the manifold wisdom of God, is now made known to the sovereigns and authorities in the heavenly places, by means of the assembly.”

And then he said;  “Or in other words, converted from passive, to active voice:  “The assembly (the church) will now make known, the manifold wisdom of God, to the sovereigns and authorities who are in the heavenly places.”   But either way you say it, it says the same thing.

Now there’s of course a reason why I’m saying all this about the sentence structure of this verse.  And this is all going to tie into our subject, which is..  How Did We Get The Bible.  But, we’re out of time for right now.  And so I’ll have to continue in our next lesson, Lord willing.